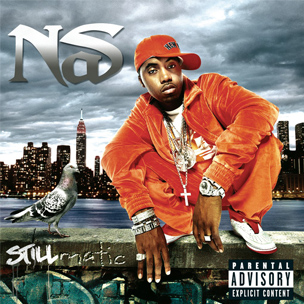 Nas has returned after a brief hiatus with his latest album: Stillmatic. If you haven’t heard of Nas, here’s a brief synopsis of this MC’s career. His first album is one of the most influential and revered Hip Hop classics ever. After its release, Nas‘ next few albums and projects were universally panned and harshly critiqued by dedicated heads. However, the
masses were definitely starting to swallow it up. Hits like If I ruled the world featuring Lauren Hill, and Hate Me Now featuring Puff Daddy were mainstream successes.

Unfortunately, in the process, Nas lost a lot of his street cred’ that had made him such a hit in the first place. Hailing from Queensbridge, New York, Nas is back to reclaim his crown amongst Hip Hop’s elite. Easily one of the best albums of the year, Stillmatic runs the gamut of street poetry to storytelling and bravado. The well publicized “beef” between Jay-Z and Nas is continued, when Nas kicks his rebuttal on the track Ether. Nas gets some nice digs in, but the track is strictly a battle track. This CD is filled with instant classics, Got Urself A… is a powerful, and must hear single, You’re Da Man, Every Ghetto, as well as the DJ Premier produced 2nd Childhood are vintage NAS circa Illmatic.

A track I feel strongly about is the moving, and thought provoking What Goes Around. This song alone restored my faith in QB’s finest MC, and is a testament to NAS ability to assault the MIC with intelligent thoughts. He literally assaults the microphone with such conviction and truth, that it’s painful. Any doubters need only to peep this song to know what I’m talking about.

Next time Jay-Z decides to dis NAS about kicking knowledge, he should listen to the words on Stillmatic. Nas is back, and he has my vote for one of the top albums of the year. Cop the CD. ‘Nuff said.