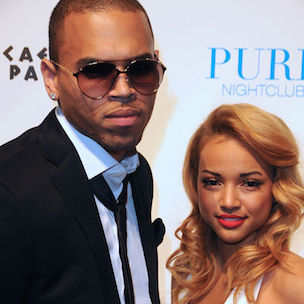 Chris Brown has officially lost Karrueche, as she blasts him on Twitter in regards to some recent news. Apparently, C Breezy is a father to a nine-month-old baby girl, with former model Nia. All 3 have been sighted hanging out. Awkward.

How Kimye Views The Colors Of The Viral Dress

What color is that dress? I see white & gold. Kanye sees black & blue, who is color blind?

Apologies for bringing up this crazy dress fiasco, but in the midst of arguing what colors you see, wouldn’t it be nice to know what Kimye sees? “Black and blue” versus “white and gold” represent the majority of the controversy. What we didn’t know at first, is at the end of the day, it all depends on your vision.

Kendrick Lamar being MIA on Instagram leaves fans wondering what’s next. Only half-MIA on Twitter, the Compton rapper recently tweeted a link to an iTunes preview to his long awaited upcoming album. Interestingly enough, all the track names remain hidden except “The Blacker The Berry.”

Its cool to talk about me all day any day I find with that, I can take a joke .. That what I do joke, but I didn't see the point of that

Another Iggy Azalea hater. Sports Center anchor Robert Flores calls out Iggy and boyfriend Nick Young from the Los Angeles Lakers stating, “Nick, while dolphins are trying to kill you, your girlfriend’s trying to kill Hip Hop. Let’s call it even, OK?” While Swaggy P did admit his fear of dolphins earlier this month, he jumps to defend his girlfriend.

"My goal, if I was going to do art, fine art, would have been to become Picasso or greater." #YeezOx

"That always sounds so funny to people, comparing yourself to someone who has done so much, and that’s a mentality that suppresses humanity"

"Obama calls the home phone, by the way." #YeezOx

Kanye West recently spoke to the Oxford Guild Society at the University’s Museum of Natural History. Students at the University live-blogged the lecture, which lasted about 30 minutes and covered a wide variety of topics. More than 1,600 students and administrators attended the event, dubbed by the guild as “the biggest speaker of the year.”

Snoop Dogg released the cover art for his upcoming album Bush, slated to be released mid-March. Not only will it be entirely produced by Pharrell, but also released under his I Am Other imprint. Snoop states this project will be completely different from anything he has ever done.

I might get dropped from the label for this 1, but fuck it lol…https://t.co/2DDINBGAR3

In honor of his 47-city “These Days…” tour, Ab-Soul released a freestyle called “47 Bars,” worried that the content of the song will get him dropped from his TDE label. On the track produced by Alchemist, Soulo drops some choice words regarding the recent wave of males wearing dresses. CJ Fly from Pro Era responds asking him to come to his Brooklyn collective.

The hype of Kanye West’s new album So Help Me God is real, real enough to create a fake tracklist. Although it looked incredibly promising, Def Jam confirms it is not legit. The proposed release date of March 10 had as all wishing it was real.

Migos notified fans via Twitter about the release of their first project of 2015, “Migo Lingo.” The cover art depicts Benjamin Franklin donning a black-and-gold sombrero with a gold cuban link chain around his neck. DJ Durel and YRN Lingo host the mixtape, available on March 4.

Have U seen "MMG under God" video http://t.co/xvzhYlWr6b Nvm the comment section a lot of ppl can't live their life with out excessive hate

Wale recently releases a short inspirational video titled “MMG under God”. Taking place in his hometown of Washington D.C., it gives us a true sense of his character and how his music inspires others. His upcoming project The Album About Nothing is slated to be released on the last day of this month.

Y'all misinformed homies better go roll that sHhh light that Shhh and smoke that shhh and calm down. Y'all falling for the pork in the bun

FYI. @methodman was misinformed by @xxl and you guys are riding a wave into rocks. Do the knowledge before you speak. #wutang

A question by XXL Magazine regarding the waiting period for Wu-Tang Clan’s highly anticipated album Once Upon A Time In Shaolin led to a harsh response from Method Man.

On March 4, Method Man told the magazine, “I’m tired of this shit and I know everybody else is tired of it, too. Fuck that album, if that’s what they are doing.” Then, in chimes RZA.