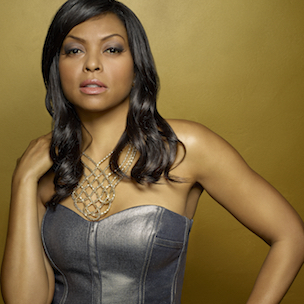 Television’s first great hour-long musical drama of 2015, Empire, has become a water cooler conversation initiator after making its debut in early January. Starring Terrence Howard and Taraji P. Henson, the FOX series has already been dubbed Hip Hop’s equivalent to ABC’s insanely popular country music-based Nashville. Focused on record label and media company Empire Enterprise, Howard stars as Lucious Lyon; former drug dealer turned rapper who has built the American dream through even more questionable means. This is where Henson’s portrayal of  ex-wife Cookie Lyon comes in. Recently released from prison after a seventeen year sentence for drug charges, Cookie wants half of Empire Enterprise as cash gained through illicit dealings funded the company’s early beginnings. A huge bulk of the drama also comes through Lucious’ recent diagnosis of ALS and which of his three sons get control after his eventual death. This leads to an interesting power struggle between executive eldest son Andre, singer/songwriter middle child Jamal and hot-headed aspiring rapper and youngest sibling Hakeem.

This week, we explore some of the things Empire gets wrong in terms of Hip Hop and the music industry at large.

Part of the series’ narrative revolves around Empire Enterprises as it makes the final administrative steps to becoming publicly traded on the New York Stock Exchange. Alongside the power struggle between Lucious’ three sons and Cookie, his recent diagnosis with ALS complicates things even further. This is why several episodes in, the Empire Enterprises’ leader tries to convince Anika’s father to grant him a bill of wellness as one of the requirements for proceeding with an IPO. Those who understand the music industry knows the total implausibility of that ever occurring considering even heavy hitters from Motown to Def Jam all were eventually swallowed by bigger entities. Quite interesting considering the show mentions major label artist but not the record companies themselves. So in the world of Empire, the big three consisting of Warner Brother’s Music, Universal Music Group or Sony Music (who provides music for the show) don’t exist. If they did, Empire Enterprises sounds like something that UMG would eventually acquire.

Considering Hip Hop’s history with law enforcement, the investigation of Bunky’s murder by Detective Walker seems pretty weak and inadequate. Alongside rummaging through Lucious’ trash and weak witnesses, there’s a level of incompetence as the detective attempts to close the case. Anyone with passive knowledge of Hip Hop understands the lengths authorities will go to acquire someone suspected of anything criminal. Coupled with the FBI’s investigation on where exactly the seed money for Enterprise Empire came from, there’s no way things would proceeded this lightly. The way the government authorities tried to take down Murda Inc. in their indictment couldn’t have been any better proof. Remember this documentary? Yes, it’s that serious. Even the deaths of Tupac and Biggie have very persuasive evidence that their deaths were orchestrated by individuals of higher authority. There’s a reason why Jay Z is a lot more low-key now than in his Rocafella days.

During the first episode, Lucious mentions the rise of the Internet for low album sales as if this hasn’t been known for several years by now. There isn’t even much mention of streaming services nor iTunes as a distribution center for most music consumption. Even the episode where Hakeem asks for nearly a million dollars for a music video is ludicrous as average budgets are significantly lower than they were in the past. The years of epic music videos have been on hold for a while now. Even the idea of homosexuality or general changes in the perception in black masculinity sounds weird as things have morphed over the years. This is a generation of Hip Hop where it’s socially acceptable for rappers to wear dresses and red fingernail polish in some eyes. There are also those who have been open about their lifestyle like Frank Ocean, Big Freedia and Zebra Katz.

Hakeem may be a popular artist in the world of Empire. In reality however, there’s no way in hell consumers would approve. Cookie mentions that the youngest son’s music was inspired by Bunky despite being the only son to grow up with money. There isn’t a better example of that than Lil Romeo. Even to a lesser extent, Corey Gunz and Diggy haven’t done nearly as well as their parents.  When he tried to get gully, folks easily saw through that. Part of the reason is by nature, Hip Hop’s root is the struggle. If one hasn’t struggled much, it’s fairly difficult for anyone to relate, which is why children of famous Rap stars with similar aspirations normally never do well. Let alone anyone in that category attempting to rhyme as if they’re from the streets.

Part of the promotional campaign around Empire revolves around Lucious telling his story of going from mixtape rapper to entertainment mogul. With the mixtape game not hitting similar highs since the mid 2000s, this story doesn’t make much sense. Things get even weirder with flashbacks that have an early 90s aesthetic. Even his music creation process in Philly during that era doesn’t make sense. What gangsta rapper / producer in the East Coast during that moment of time neglected samples in favor of harmonies and acoustic guitars? The only group from Philly that even used live instrumentation then was The Roots and their lyrical themes were more socio-political than Lucious’ style.