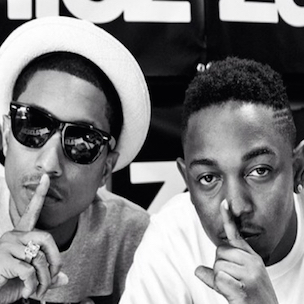 This week, Rick Ross reps for his resident Ohioan Stalley, Nas blesses you with new music over a Dilla beat, and E-40 announces a triple album.

Scott Vener, the music curator for HBO’s hit shows Entourage and How To Make It In America recently spills on Twitter his excitement after hearing new music from Kendrick Lamar. He enters an impromptu listening session with Pharrell, and had the opportunity to hear the new track “King Kunta.” He reports it bringing him back to 90’s hip hop, with “a tour of the cultural fabric of LA like never before.” Now the waiting game begins…

The Los Angeles Lakers kicked off the 2014-15 NBA Season with a home opener against the Houston Rockets on October 28 at Staples Center. Unfortunately, the game resulted in a loss for the Lakers. Slim Thug apparently, was not too happy with Kobe Bryant’s performance. He goes off on him in a series of tweets, and applauds Dwight Howard for elbowing him during the game.

@XXL Tyga is the real life malibus most wanted. Kids a clown. And he’s using drakes flow on it? FOH.

With the current beef with Young Money, Tyga releases a track called “Make It Work,” which is apparently a comeback diss track to Drake. In Drake’s latest single “6 God,” it is presumed that there are shots at labelmate Tyga. XXL Magazine recently tweeted this track by Tyga, in which Statik Selektah speaks his mind on T-Raw, calling him the “real life Malibu’s most wanted.”

With the current beef with Young Money, Tyga releases a track called “Make It Work,” which is apparently a comeback diss track to Drake. In Drake’s latest single “6 God,” it is presumed that there are shots at labelmate Tyga. XXL Magazine recently tweeted this track by Tyga, in which Statik Selektah speaks his mind on T-Raw, calling him the “real life Malibu’s most wanted.”

Schoolboy Q Lists Rappers He Can Learn From

How about u take notes!!!! WHen I’m around dre, kendrick, dude dawg, 50 cent I listen my nigg

TDE’s Schoolboy Q recently takes to Twitter to announce a handful of artists that he can learn from. These include none other than Kendrick Lamar, Dr. Dre, and 50 Cent. He claims when he is around them, he listens and takes notes. He recently publicly announced that Kathy Griffin, a comedian, his “secret lover.”

Rick Ross Puts On For Stalley

MMG’s own Stalley finally released his debut studio album Ohio on October 27. Who better than to put on for the emcee than his boss, Rick Ross. With five IG posts regarding the album, and a lot more on Twitter, Ricky Rozay must really believe in this project. Stalley puts on for his hometown, Ohio, claiming there is a lot of talent originating from the state: Kid Cudi, Chip Tha Ripper, Machine Gun Kelly, to name a few.

Nas and J Dilla on a track? Done. The New York emcee first gave fans a preview of the song at a Run The Jewels fan appreciation event in Brooklyn. As a surprise guest, he gives them a preview of the track titled “The Season,” produced by J Dilla. It features Nas spitting over J Dilla’s “Gobstopper,” a track off his Donuts album.

Not one, not two, but three new albums coming from the Ambassador of the Bay. E-40 recently takes to Twitter to announce the upcoming release of his “Sharp On All 4 Corners” collection of albums. The first album is titled Corner 1, the second Corner 2, and the third the Deluxe Edition. E-40 seems to be consistent his multiple album projects.

Did you get/want a degree because you’re scared or because you wanted one? That answer will tell you what kind of person you are.

Stop throwing your “higher education” in people’s face, especially if you’re not willing to tell them why you really did it. Paths differ.

Famous for his single “U Guessed It,” OG Maco takes to Twitter to expresses his thoughts on education. He pretty much questions someone who has a degree, accusing them of only obtaining it due to fear of not having one. Is he secretly bitter of someone with a higher education? Who knows. His fame started on Vine, after his track was looped over and over and over.

Nicki Minaj is stoked to release the cover art for her upcoming project The Pink Print. Fully expressing her excitement through a series of emojis, fans will be given the exact time the artwork will be released on Monday morning. She has every right to hype this up. Her project is slated to be released December 15 of this year.

Kid Ink has been teasing his fans about the video for “Body Language,” and now it is finally out for the world to see. The track featuring Tinashe and Usher is the first single of Kid Ink’s upcoming album, slated to be released in 2015. The video is inspired by a peep show, consisting of females twerking. Do we expect anything less?