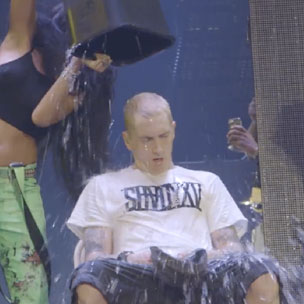 This week, J. Cole heads over to Ferguson to support the protesters and Wiz Khalifa shares a family photograph from his wedding day on his one-year anniversary.

J.Cole has gotta be the REALEST rapper alive, Here’s him in Ferguson showing respect to the slain spot of Mike Brown. pic.twitter.com/QRwkMn6mEf

After releasing a tribute track to Michael Brown titled “Be Free,” J. Cole made his way to Ferguson, Missouri to see what was really happening in the St. Louis County town. The Roc Nation emcee was captured paying respect to Brown by visiting the site of his murder. Michael Brown was unarmed when he was shot and killed by the barrel of a policeman on Saturday, August 9. The murder has sparked protests in the community of Ferguson that have been met with tear gas, tanks and a militarized police force. J. Cole also spoke with protesters and Captain Ron Johnson, the highway patrol official in charge of the security situation in Ferguson. Read more about it here.

My, how quickly one year has passed by. Wiz Khalifa shared a family photo on Twitter of the day where he and wife Amber Rose exchanged vows in front of family and friends, one year ago. In the picture, Wiz is dressed in a sharp fuchsia tuxedo jacket and Amber Rose is wearing a gown as white as her smile. Sebastian “The Bash” Taylor Thomas, Wiz’s son, also made an appearance and while his parents were all smiles, he looked into the camera with a curious look on his face. The wedding ceremony was held in Philadelphia on August 18.

Nicki Minaj Was Drunk When She Gave Drake A Lap Dance

All drunk freestyle > RT “@MzBellaBarbie: @NICKIMINAJ did you practice the lapdance scene or was that all freestyle? #AnacondaVideoOnVEVO”

Either Nicki Minaj drank to give Drake the best lap dance of his life or she drank to forget that it’s Drake she’s dancing on and to forget that she most likely sees him as a brother. Nicki Minaj held a Twitter Q&A to answer some of the “Anaconda” questions that fans had burning in their minds. Nicki didn’t practice the lap dance, she was drunk. She called up Drake because she saw him in the studio the night before. Drake was a very happy man. There’s a kitchen scene that didn’t make the cut because it was “real explicit.”

Ab-Soul is set to go on tour starting September in support of his These Days… album, which was released in June. The tour kicks off September 17 at The Orpheum in Tampa, Florida and ends November 1 at the Gothic Theatre in Englewood, Colorado. Recently, it was revealed that TDE will embark on a world tour in 2015. It looks like Ab-Soul has a busy year coming his way. Tour on tour on tour. To read his latest interview with HipHopDX, click here.

He filled in last minute for another anchor and he clearly didn’t know who I was, which is why he walked over my perspective.

Aside from J. Cole, another emcee who made his way out to Ferguson, Missouri was Talib Kweli. The Brooklyn emcee attended the protests and live-tweeted throughout the commotion between the police and protesters. He even detailed the moment a police officer told him that he would “blow your brains out.” While in Ferguson, Talib Kweli was asked to originally interview with Anderson Cooper on CNN but news anchor Don Lemon filled in for him instead. The two discussed the media’s coverage on the protests and Kweli criticized CNN for doing a “horrible job” with coverage. That’s where the interview took a sour turn. Watch the full interview here.

#ALSIceBucketChallenge complete @drdre. Youre up next @RickRubin. Thanks to @mRpOrTeR7 & @Rihanna for joining already http://t.co/mQlTfFY9Md

Earlier in the week, Dr. Dre participated in the ALS Ice Bucket Challenge and challenged Eminem to do the same. (Sidenote: I just read a comment on the Dr. Dre ALS challenge video that read, “You can drop a bucket of ice but not ‘Detox.'” Ha!) Even though the rules are that you only have 24 hours to fulfill your challenge or donate $100 to the cause, Eminem took up the challenge and was doused with icy water in front of the Detroit crowd on his last “The Monster Tour” stop. He went on to challenge Rihanna (who poured the bucket on him), good thing she was standing right next to him.

Joe Budden Is A Wanted Man, According To The NYPD

At the time this list was published, Joe Budden’s “wanted” tweet by the NYPD’s official Twitter account received 18,329 retweets and was favorited 5,661 times. Many people thought it was a joke or that it was funny to see their favorite rapper being “wanted” on Twitter. According to the post, Budden is wanted for robbery, taking a cellphone of a 25-year-old woman on August 18 at 4:20 am. The post came after TMZ broke the news of an altercation between Joe Budden and a woman, who claims she was physically abused by Budden. The rapper responded with a straightforward-yet-classy tweet, “I’m gonna sue the living shit out u gentlemen.”

While people are getting challenged to pour a buck of ice on their heads to bring awareness to ALS (amyotrophic lateral sclerosis), Floyd Mayweather was challenged to read a page out of a Harry Potter book by 50 Cent. 50 Cent basically did this for his own shits and giggles but Mayweather wasn’t amused. He didn’t read a page out of any book but instead took a picture of two checks (a total sum of over 72 million dollars) and wrote, “Read this.” Money talks but doesn’t read but does it matter when you’re writing checks for 72 million?

U can swindle them other kids but not mine!! As u were tho pimpin @LupeFiasco pic.twitter.com/yMLCietrN2

Luv ya @KidCudi how much did your Guiseppe Zanottis cost to make at the factory but they retailing at what again? pic.twitter.com/ATcmLJogdG

Kid Cudi gave Lupe Fiasco the social media side eye when Lupe announced that he would be personalizing verses for fans for $500. “I will personalize a 1 verse song for you. $500. You pick the instrumental, mood & subject. 1 physical copy which you must come pick up,” the Chicago rapper said on Twitter. First, Cudi publicly questioned what Lupe was doing with the money. Then, Lupe responded and it led into a sarcastic exchange filled with Kermit memes. Read more of the exchange here.

Taylor Swift released a new video that features ballerinas, breakdancers, cheerleaders and… twerkers. In one scene of the “Shake It Off,” the country/pop singer put on her high-waisted shorts and parodied a music video twerk scene while being surrounded by a troop of ladies gyrating behind her and above her. It didn’t take long before the video received criticism because in this day and age, we would think someone surrounded by PR teams and executives would “know better.” Earl Sweatshirt was one of the first to speak up. “haven’t watched the taylor swift video and I don’t need to watch it to tell you that it’s inherently offensive and ultimately harmful,” he wrote on Twitter. “perpetuating black stereotypes to the same demographic of white girls who hide their prejudice by proclaiming their love of the culture…for instance, those of you who are afraid of black people but love that in 2014 it’s ok for you to be trill or twerk or say nigga.”