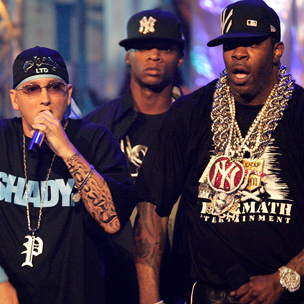 As such, we’re reserving this space for a weekly reaction to Hip Hop’s current events. Or whatever else we deem worthy. And the “we” in question is myself, Omar Burgess and Andre Grant. Collectively we serve as HipHopDX’s Features Staff. Aside from tackling stray topics, we may invite artists and other personalities in Hip Hop to join the conversation. Without further delay, here are this week’s “Stray Shots.”

Why Is The CIA Tweeting About Tupac?

Omar: I definitely believe people are tweeting, writing and/or emailing the CIA about Tupac Shakur’s whereabouts. It makes sense—and not in that, “I-read-Behold The Pale Horse-and-think-Jay-is-in-the-Illuminati” way. The NSA has your phone records, the LAPD is toying with the idea of drones, and there are documented cases of the US government giving its own black citizens syphilis and creating an environment meant to promote infighting among their more nationalistic groups. Police corruption has been linked to both the murders of Tupac Shakur and the Notorious B.I.G. And while the FBI, CIA and Public Health Service (and later the CDC) are all separate government entities, they’re still government entities. So I feel you’re completely justified if you’re a person of color and you don’t trust your government. Forgive me if that makes me sound like a batshit crazy Tea Partier. I’m not. But as Joseph Heller infamously wrote, “Just because you’re paranoid doesn’t mean they aren’t after you.”

So all that said, the CIA is in no position to joke about Tupac Shakur. I’m not of the belief that you should start a hashtag campaign and adopt a social media mob mentality each time someone in a position of power tweets something dumb or insensitive. But someone at the CIA should have said, “Hey, given our history and the way Tupac is revered within certain circles, maybe we shouldn’t crack jokes about him on Twitter.” And if the tweet wasn’t a joke, the above cases of governmental wrongdoing are more than enough reason for people to inquire about ‘Pac. The CIA should expect such inquiries. I’d take it a step further and ask them about Oscar Danilo Blandon, Ronald Reagan and “Freeway” Ricky Ross.

Andre: It does take a certain amount of gall to troll on the death of a beloved artist the way the CIA did when they tweeted, “No, we don’t know where Tupac is. #twitterversary” a few days ago out of the ether. But the mad men at the Central Intelligence Agency are not exactly known for their open-mindedness. And, as the tweet showed, a sense of humor either. There are still a faction of people out there who honestly believe the CIA was involved in Tupac’s untimely demise, and they’ve got some backup. If you’ve got the time and the stomach, you can take to Google right now and disappear down a rabbit hole of crazy CIA programs that may or may not still be in existence. From the purposeful poisoning of African-American communities with crack cocaine (a not unheard of tactic if the Opium Wars are to be believed) to the purposeful eradication of the Black Panthers, US history is littered with examples of government bodies stepping on the souls of black folks. And that hashtag! What the hell is #twitterversary? Is that how you guys want to start off your campaign of misinformation and intimidation? Wait, heh, it’s already working.

Then there’s the content. They said they don’t know where Tupac is, which implies that he’s alive. You couldn’t help but sit up in your chair while watching the aftermath and think “these guys are on a roll.” I mean, if the CIA doesn’t know exactly where to put the knife and exactly what angle to turn it then who does, right? But it doesn’t end there. It means they were aware of Suge Knight saying ‘Pac is on an island somewhere, chillin’. It means they caught wind of ‘Pacs significance and are stating —however subtly— that they have been watching and are continuing to watch. And in one tweet, the CIA has established just how frightening they can be.

Omar: In another era, Eminem would be in the twilight of his career. Those without an emotional attachment to his past success and mythology can admit he’s no longer in peak The Marshal Mathers LP or The Slim Shady LP form. He’s still elite on a technical level, ridiculously commercially successful, respected (in some cases feared) by his peers and he still has access to the best production and collaborators he wants. But the screaming, trite subject matter and some of the 2001 shtick are masking what I think is a diminished skill set. Guess what? Millions of other people disagree, and so Eminem is still wildly commercially successful in his early forties.

The same cannot be said for former fellow Aftermath signee Busta Rhymes—who hasn’t put out a retail album since 2009’s Back On My Bullshit (I’m excluding digital only or free releases Anarchy 2, New Money and Year of the Dragon). Busta has become a mercenary of sorts, taking up with Young Money and Google Play for projects, but neither union has been particularly productive. In a lot of ways, he and Eminem’s peak years—singularly transcendent talent, high profile collaborations, big budget videos and an assist from Dr. Dre—have interesting similarities. But the major label system is still mutually beneficial for Em, while Rap’s current economic climate doesn’t favor Busta Rhymes accenting his highly-animated delivery with a Hype Williams visual component. But for six minutes and six seconds, it’s great to hear Busta Rhymes ditch the dreaded, “then-I-really-gotta-get-a-little-bit” quasi double time cadence and revisit his Leaders of the New School days. Also pleasantly absent is the dope kilo talk Busta adopted around 2005. And Em backs off of the OCD habit of rhyming every syllable for some genuine fun. I feel like this is what two guys in their forties should sound like, and I mean that in the most respectful way possible. Their collab is epic without the aid of Hype Williams in 1080p. It’s fun, it’s innocent and it’s long overdue. It’s the Hip Hop equivalent of when Al Pacino and Robert De Niro meet at that coffee shop in the movie Heat, but the only thing getting killed is Scoop DeVille’s track.

Andre: I’d just like to say that Busta Rhymes blacked out on “Calm Down” for the first time in what feels like a lifetime. Busta’s long and illustrious career is filled with both quasi and legit classics like Extinction Level Event: The Final World Front, The Coming and When Disaster Strikes, and some of the most innovative rhyme schemes and videos (“Gimme Some More,” anyone) in our time. Yeah, his last few decisions have been dubious and such, but he looks like he’s truly back to having fun, which made him so devastating to begin with. And that’s why this pairing works so well. Eminem isn’t his usually dark and brooding self here, and Busta isn’t his so-jubilant-i’m-about-to-float-way self either, and their Ying/Yang pairing has enlivened us for another day.

But unlike back in the day when this would be a single and it would get released and sell 500,000 copies and allow people to eat for a while, the Internet is already coming down from it’s high and asking “what’s next?” Our appetites have become so engorged that even this classic tit for tat, which sounds like honest competition in the booth, is already yesterday’s news. In much this way, people are out here giving away really, really good bars, which in turn is diminishing the value of bars in general. This has translated in two ways. Battle rap is bigger than seemingly ever now that people are going back to the essence of things because why not? And albums are getting scarcer and scarcer to come by with artists dropping them seemingly without warning, promotion, or follow through. I’m not particularly upset at either one (okay, you got me, I’m really upset at the latter one), but all things must evolve. For now, it’s dope to see that Busta and Eminem can make old sound new again, but alas, what’s next?

RELATED: Stray Shots: The Liberation Of Dame Dash & The Year Of The Reunion