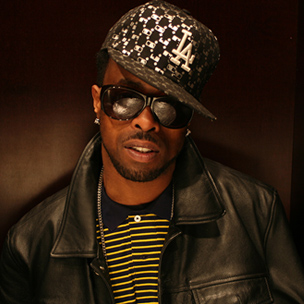 The Blueprint: 5 Stories Behind Sir Jinx's Most Interesting Collaborations

Sir Jinx is an oft-unmentioned Hip Hop legend. When it comes to West Coast Hip Hop, if he hasn’t worked with an artist, he’s either responsible for the start of their career, or the career of the artist that inspired them. On top of that, he put in major work with Kool G Rap, whose influence on Rap in general is huge. While he’s most notably known for his work on Ice Cube’s AmeriKKKa’s Most Wanted, Death Certificate, and working with Xzibit on 40 Days and 40 Nights, his work with other artists, including those outside of Hip Hop, often goes under the radar.

In addition to his many Hip Hop contributions, Sir Jinx can boast of work with Rage Against the Machine and Teena Marie among many others—including a collaborator many feel is one of Hip Hops most sampled artists.

“I wanted to meet him and work with him, so I flew out to Memphis,” Jinx says of the late Isaac Hayes. “I got a little spot out there and was chilling with him for a few weeks in the studio, just me and Isaac. I got a gang of pictures. That was a real good time.”

April 1 saw Sir Jinx release Penz and Needlez: 100% Raw Hip Hop. The project features Kendrick Lamar and Evidence with production from the likes of Statik Selektah, DJ Khalil, Battlecat, Dawaun Parker and Exile. Prior to looking forward to that body of work, Jinx took some time to look back and share the stories behind five of his most interesting collaborations.

“Where I came from at the time, it was still the “Planet Rock” era—Joeski Love’s “Pee Wee’s Dance”—it was that kind of day. I was working with Dre, and Steve Gano at the Rodium. When we did the Rodium Swap Meet tapes, it was all of us—Eazy-E, Ice Cube, MC Ren, all of them. When N.W.A started taking off, Dre stopped doing it. I took that format from Steve Gano, and told [V.I.P. Records’ Owner] Kelvin Anderson, ‘Yo, you need to start making these little tapes, and put the speakers outside the door. So when the people come from school, they’ll know this is a record shop for them rather than a Gospel record shop.’ You know, a Gospel record shop is almost like a truancy officer spot; they not coming. This is right across the street from Poly [High]. Kelvin was like, ‘Perfect idea,’ and he put the speaker out and started playing Hip Hop. You see the Snoop Dogg [“What’s My Name”] video? They’re partying in the [VIP Records] parking lot…that’s how it was every day. There’s a fish market in the parking lot, and there was a phone booth right in the corner. It got it so popping that Kelvin was like, ‘Let’s try to put out some music.’ I was under the Dre situation. I was telling him everything I learned with the Ruthless environment. Kelvin went out [and] bought me the SP-1200, and when I got the 1200, I started working with everybody. Souls of Mischief; they were Rhythm then, Del [the Funky Homosapien] and all these people.

“That was in my head, and it wasn’t called giving beats away then, it was called working in the studio. People didn’t come and ask you for beats, they’d say, ‘Hey, come over. Let’s do a song.’ That’s how it was back in them days. After that, I ended up doing AmeriKKKa’s Most Wanted, right after that. If you do the numbers, you’ll see like ‘89, then ’90. I was out there in ’89 and ’90 for AmeriKKKa’s Most. Kelvin’s my man.”

“It was a guy that…back when I used to go to clubs, deejay and do my little stuff, one guy used to always come up to me, like, ‘Yo, you need to deal with S.D.’ I’m like, ‘Oh…Okay,’ because I already had dealt with San Diego, like years ago. This dude is telling me they got a real solid situation. It took like four of five times before I took him serious. Everybody always comes up to me saying they got something good. He was like, ‘I got nine rappers,’ and out of them nine people, Mitchy Slick was the guy. Mitchy Slick wasn’t developed; he was a dude on the street that said he wanted to rhyme… His voice was crazy, and the way he writes was crazy. It kind of reminded me of Cube, but kind of different. Because Master P was taking off at the time, people were rhyming sort of different. I was trying to pull him back, so he can start rhyming a type of way so he can go forward. Some people think if you rhyme flashy, people will like your rap. If you look at like a Jay Z, you gotta at least have good cadence, you gotta follow through and come to a conclusion. It’s all these type of things we worked on with Mitchy Slick ‘cause I saw that in him… Then after Mitch came, I started working on 40 Dayz & 40 Nightz. Xzibit just started his situation. I plugged my homebody Reese, ‘cause Reese is like a swole dude, and Xzibit needed security. Reese ended up being Xzibit’s security for a very long time. So while Reese is there doing security. I’m deejaying. Mitchy Slick is playing the back role—learning, soaking it in the whole way. This is how Mitch ended up getting into Strong Arm Steady. I spent a lot of years with Mitchy Slick.”

Sir Jinx Met Souls of Mischief As Teenagers During His N.W.A Days

“Del is Ice Cube’s cousin. Back in the day, when Eazy-E and them were starting N.W.A… I had no part in the N.W.A situation. Me and Eazy had a relationship, and I was trying to get Eazy to let me have my own…I would say, department. It wasn’t like my label, and I wouldn’t even think of that. I was like, ‘Let me have my own leg of the Ruthless family. I been here since day one.’ He was like, ‘Alright.’ My groups I took over there was Yo-Yo and Del. Del had two young guys with him, and they were like 14 and 15. Those two guys were Tajai and Adam [A-Plus]. I was trying to develop music and write songs for J.J. Fadd. We were trying to get songs placed over there and trying to get songs placed with Michel’le.”

“Even back in them days, Snoop used to catch the bus from before the Kelvin Anderson situation. We was doing the Rodium Swap Meet tapes. Warren G would catch the bus out to my house with Snoop, and we used to do little demos at the crib years ago. Remember when I told you we used to all be together? If you was a rapper, you was a weirdo kind of. You wasn’t a gangsta, you wasn’t a drug dealer, and you were almost a clown if you wanted to be into Hip Hop. At some point, if you wanted to be into Hip Hop, I recognized you and you recognized me. It wasn’t no saying, ‘Ahh, he could be a gangster,’ or, ‘He could be a drug dealer.’ No! You recognized a Rap nigga from the door—a nigga with a bandana on his leg, baggy pants and fat laces…you know what I mean? At some point back in the day, we could identify each other better. Now, you don’t know who the hell the rapper is.”

“The situation with G Rap came because we were doing Amerikkka’s Most Wanted; we were touring out there. When we did that show at Apollo, it was K-Solo… No, I think that was a little bit further back. I knew of G Rap, and then the lady, Karen Jones that was dealing with everything under Benny Medina asked me if I liked G Rap. She had already plugged me with the Trelude project that got me some change in my pocket. I was like, ‘Cool, throw me anything,’ She said ‘Well, I got this East Coast rapper, named Kool G Rap.’ I said, ‘Hell yeah!’ She told me, ‘I’ll fly him out here, and put y’all in the studio to see if you can help him remix his songs that he already has.’ I guess he was having issues with the people who helped him develop his songs, because he’s a rapper. A lot of rappers get to where they say the person that’s helping them is controlling them rather than helping them. He wanted to do his own thing, and he just needed somebody with ears. So that’s where she came and plugged the situation. He came down, and we sat and talked a little bit. G Rap is just like all of us. Men like me, Brother J, Ice Cube, King Tee—everybody is the same way. They laugh, giggle, drink a little and have some fun, but they’re really, really good at their craft. G Rap was the best at that kind of rhyme. After that, I was supposed to do a couple of remixes, and I ended up doing the whole album.”