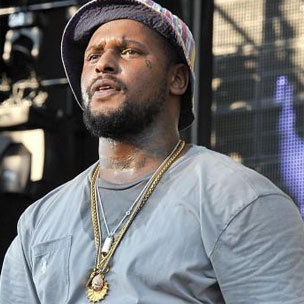 ScHoolboy Q kicks a line on “Blind Threats” that aptly embodies the meaning behind the title of his highly anticipated debut, Oxymoron. Over a gritty arrangement mean-mugging like quintessential boom-bap, Q raps, “We will never make it out alive / Shit, we livin’ to die / Oxymoron.” It’s an ironically futile sentiment coming from an artist emblazoned with so much promise. From public persona alone, ScHoolboy Q seems as carefree as they come. He’s a gangsta who smiles; who rocks crowds and Kangols like vintage LL Cool J. His TDE team stays winning. He’s the Man Of The Year.

Well, as he said describing the sound of his debut album during his listening session last night in Los Angeles, California’s Sonos Studio (February 17), things are sometimes darker than they seem. Speaking in front of a room filled with major music media, ScHoolboy detailed his life’s trying times, from his quiet addiction to prescription pills to his wish that the world would end. “That was my little secret,” he said while explaining the origins of “Prescription/Oxymoron,” one of the album’s most personal offerings. “I always had the cup with me. They just never knew I had a gang of pills in the other bottle.”

But don’t expect Oxymoron to sound like theme music to suicide. If anything, the ScHoolboy Q story is one of triumph. The tracks previewed reflect that success. There are songs for the ladies and the gang bangers, the block and the block party. It’s diverse. That’s the first thing HipHopDX learned from last night’s listening session. Here are five more:

ScHoolboy Q’s Grandma Let Him Play With Her Gun

“When I first made [‘Gangsta’] all I wanted to say was that my grandma showed me my first strap. That’s all I wanted to put in the song. I just thought that was so gangsta. It was kind of weird, too, now that I really think about it. She used to take her bullets out of the gun and leave the clip in her room and let me play with her gun. I was an only child so I probably got on her nerves that much that she finally gave me her burner, like, ‘Here, get the fuck out my face.’ [Laughs] I just wanted to say that so bad.”

“[I was also able to] speak on my homeboy Rat Tone. He’s one of my big homies from my hood. He showed me my first [AK-47] when I was like 11-years-old. I was amazed by it. I thought that shit was tight. They used to have all the shiny shit. That’s how we talked. We would call a gun ‘fly.’ Like, ‘Your dickies is cut super perfect and they got the right amount of dirt on them. That shit is fly.’

“I remember when I was on the block in 2010. All I could think of was how I was so down on myself and just life in general. I was really banking on 2012 like, ‘It’s about to be over anyway. I ain’t even tripping.’ [Laughs] I can thug it out for these last two years. But sure enough, that shit didn’t happen. Sure enough, in 2011, I introduced myself really to the Rap game.”

“[‘Los Awesome’ featuring Jay Rock] is gangsta shit. It ain’t one of them melodic muthafuckas like you about to fall in love. This some gang bangin’ shit.

“I needed to get that one out the way on my album. I needed something that the gang bangers could identify with. Not so much my core fans, more so the gang members.”

“It’s people I like. I don’t go for singles or [think] ‘Is he on right now?’ It’s people I listen to; that inspires me; that I think we can attack the same emotions on the record. I usually like to mess with them.

“I usually don’t have lyrics before I have the beat. I’ll have ideas, but the beat usually takes me in the direction that I need to go. I don’t have a certain sound that I like or a certain snare or a certain timing. It just needs to speak to me.

“Blind Threats” Was Sparked By Meeting Raekwon In An Elevator

“I just needed somebody from [Wu-Tang Clan] on the album. I just needed it. Whether it was Cappadonna or Raekwon or Ghostface—I needed somebody. Me and Raekwon happen to run into each other. He wasn’t even going to an interview or nothing. We just happened to run into each other. We ran into each other in the elevator. Nothing music related. I wasn’t going to do music. He wasn’t going to do music. He just walks on the elevator I was on. I wasn’t going to say nothing to him. He said something to me. I ain’t wanna just say something. I wasn’t about to serve myself. When you meet New York niggas, they’ll serve you. They shook my hand and damn near threw that muthafucka around my neck like, ‘Get yo bitch ass outta here.’ So I’m like, ‘I ain’t going for that one this time.’ [Laughs] We’ve been trying to get a record together for eight months.”