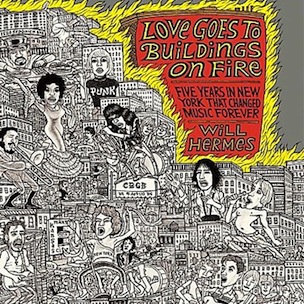 It’s an old pastime for music obsessives, argued over endlessly in bars and record stores: Which era was the greatest for music? If you could go back and live in a single time period, in a single city, which would you choose? Jazz fans might choose New Orleans in the ’20s or New York during the heyday of Diz and Bird in the ’40s. Many Rock fans lean towards San Francisco or London during the ’60s. Hip Hop heads could make a claim that New York in the late ’80s-early-’90s was the most vital time period for their preferred genre. But one time and place that constantly gets mentioned by fans of all those genres and more is New York in the 1970s, a time when so much change was taking place that if you were present you got to see not just the evolution of Jazz, Rock & Roll, Salsa, and modern Classical but the birth of several different, new styles of music: from Punk to Disco to Hip Hop to Electronic. What author Will Hermes strives to do in his new book Love Goes to Buildings on Fire: Five Years That Changed Music Forever is to give a play-by-play on just what took place to secure this era, 1972-1977, the status of “golden age” in so many music fans’ minds.

Hermes, a senior critic for Rolling Stone, uses his journalistic background to painstakingly relate the historic events that occurred in New York on a seemingly daily basis. His shuffles between several styles of music but no genres get the short shrift. He is just as knowledgeable and confident speaking on the formation of pioneering punk band Talking Heads as he is detailing the emergence of Hector Lavoe as one of Latin music’s greatest and most troubled stars. What is most impressive is the “in the trenches” feel the reader experiences. When detailing the nascent “Loft Jazz” scene one feels as if they are in the cramped apartments of the movement’s architects witnessing a performance by such giants as Anthony Braxton, Don Cherry, or Sam Rivers. Also commendable is Hermes’ dedication to exploring experimental music from composers Philip Glass, Rhys Chatham, Steve Reich, and Laurie Anderson. As the majority of this book’s readers will be Pop and Rock fans this introduction to the work of the eras more challenging artists is greatly appreciated.

Hip Hop was the most embryonic genre of this era, in fact the passages in this book that cover Rap music are essentially detailing its origin story. And because the music didn’t have any recorded sound documents to look back on the author’s recreation of the (often illicit) block parties that founded Hip Hop are impressive. From the big bang moment of DJ Kool Herc’s first party in the Bronx in 1973, where the legend spun tracks like “Yellow Sunshine,” Incredible Bongo Band’s “Apache,” and Babe Ruth’s “The Mexican” to Grandmaster Flash jacking into streetlights to power his system at parties in the park to Afrika Bambaataa introducing the Rap world to the music of Kraftwerk. The book couldn’t possibly give as full a picture of Hip Hop’s beginnings as a text like Jeff Chang’s Can’t Stop Won’t Stop, but what it does do is explore how the new genre of Hip Hop intermingled with the other facets of the New York music scene. Most important is Rap’s relationship with Disco, as the records played at a party in the Bronx were also the records being played at swanky uptown clubs in Manhattan. Hermes also pays special tribute to the graffiti scene, then so visible on New York’s subway cars. His story of the Fabulous Five’s completion of the first “full train worm,” or completely covered train, is endearing as you realize how much it meant to the young artists to have their work travel all across the city.

And that’s really true of all the artists in this book. They were breaking new ground and they had no idea how they would be received. That they were accepted then and are now heralded today as legends is probably as surprising to themselves as anyone else. There are so many important figures in the book that couldn’t possibly be mentioned in a review (Arthur Russell, Patti Smith, Bruce Springsteen, The Fania All Stars, etc). What’s amazing is that in a 350-page book Will Hermes is able to give the reader a clear picture of the trajectory of all these artists and more during the mid-’70s. The city seems so alive and teeming with creative energy that it serves as one more piece of evidence that New York City during this era will forever be looked upon as of the key periods in the history of modern culture and a place that people will forever want to revisit.

Purchase Love Goes to Buildings on Fire: Five Years in New York That Changed Music Forever by Will Hermes