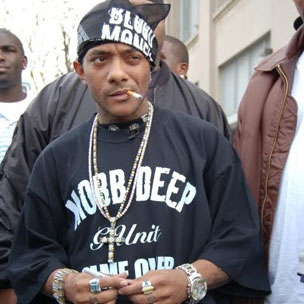 “It’s Friday you in for a long stay / Gettin’ shackled on the bus first thing come Monday / Hoping in your mind you’ll be released one day / But knowing / Home is a place you’re not going / For a long while / Now you’re up on the isle / And the position that you’re in got you refusing to smile…”
–Prodigy, Mobb Deep’s “Up North Trip.”

Among prison’s realities is the sobering effect it has on the people it surrounds. While a parade of emcees enter and exit the penal system, it consequently acts as a crash-course in sobriety. For some, like DMX, prison brings forth a detoxification process that they haven’t seen or felt in years. It gives them the opportunity to escape persistent drug use. For others, the sobriety is from the fame, groupies; the life that they thought would never leave them. Even in a media-filled world where Twitter and Facebook can update fans at a seconds notice, prison has a way of limiting the all access world. It takes an artist from performing for thousands, tweeting for hundreds of thousands, and gives them the mundane prison structure that every inmate is forced to follow. You’re a regular person again, only you’re not a civilian.

Cooking some BBQ salmon and octopus in the toaster oven. Yum! Prison at it’s best. Bout to eat and watch SNL. A bored NY’s fave past time8:43 PM Jan 22nd via webPRODIGY of MOBB DEEP
PRODIGYMOBBDEEP

With Prodigy of Mobb Deep’s minute viral introduction to the world outside of the prison facility, he appeared confident that he indeed was back. It was a subtle and rather mum reintroduction to the free world, after Prodigy attempted to stir up as much controversy as possible via blogging while inside New Jersey’s Mid-State Correctional Facility. Besides a tweet from long time Mobb affiliate Alchemist stating that he was in the studio with infamous duo, little else has been reported. An appearance on Thisis50.com, a tweet, and a self assured P informed us all that he was “back in business.”

The business and promotion models have changed, as have the way prison is marketed. At one point ignorant publicists believed in the old adage that “the only bad press is no press.” Prison, in their point of view, was not just okay press, but huge headlines. It demonstrated credibility to an art form that publicists rarely believed in, and in turn they ran with the headlines. It may have started with Tupac Shakur and the way Death Row Records and Suge Knight grandstanded during his release. It continued with every label attempting to market a sentence, celebrate a release and pretend that the crimes that were committed only validated a lifestyle. Through it all fans were made to believe that time served increased sales. We were made to believe that the years we waited would be worth it. Nowadays, unless you’re pushing unbelievable units, labels are dropping artists and it’s “on to the next one.”

The past 24 months have seen its share of iconic Hip Hop prison releases. Shyne and Flesh-n-Bone were released after lengthy bids. Mainstream darlings Lil Wayne and T.I. entered life outside of a cell. The aforementioned Mobb Deep legend joined the club as well. If you extend the time period five years further, you can include in veterans like Lil’ Kim, Beanie Sigel, Mystikal, Black Rob, DMX, C-Murder (for a day), and the list goes on. Every one of these artists has at least a gold plaque to go along with their inmate number. Furthermore, every one of these artists was released and their post-prison musical follow up either never materialized or suffered dismal sales compared to previous projects. The prison time wasn’t bad press, the years away from media outlets and studios provided a silence that even a celebration couldn’t overcome. While the media age has over saturated the culture with up-to-date irrelevant information, prison suffocates the life out of a headline. As bad as it is for the publicists to overcome, it has even bigger financial and career implications on the artist.

As Prodigy attempts to recapture glory years, Lil’ Kim continues to force herself into the headlines. Prodigy should take heed to the struggles that the Kim has had, because while P and Havoc are once again back in business, the business has become that much more difficult. Looking at the numbers, no artist besides 2Pac, profited from a prison sentence. When Lil’ Kim found herself destined to be behind bars, she used every media source to detail her journey. Accompanied with a cable television show, which showed her last moments as a free woman, she released a “five-mic” album in The Naked Truth. The five-mic album only went gold and caused Atlantic Records to end their 10-year relationship. DMX went from a consistent platinum act to an artist who struggled to maintain first-week numbers. Lil Wayne entered prison with his highest selling record of all time in Tha Carter III, but I Am Not A Human Being  saw a dramatic decrease in sales (close to 2.5 million sales less than Tha Carter III). Even Tip’s first album released after his initial sentence, No Mercy, only recently cracked gold, a feat that Paper Trail  did in its first week. These are top-flight examples; artists with less clout like Mystikal or Black Rob might not get a second chance.

Even the mention of Lil Boosie and C-Murder just reminds us how quickly they are fading from our minds, much the same way that No Limit veteran Mac left, Lil’ Kim and Prodigy are fighting for our attention. There hasn’t been any talk about validation, how Prodigy’s three-year sentence makes any of those Mobb Deep records any more believable. In truth, there isn’t a way that a publicist can spin a prison sentence into a positive career move. The bounce back is shallow, and despite best efforts, sales don’t back up the celebratory nature of releases. Bold claims, tough talk, and cosigns may demonstrate an artist’s confidence or even value, but it speaks nothing on his/her relevance or ability to sell records.

Upon his release, Mystikal quipped, “I was gone so long, all the things I achieved, all the accolades I attained, it felt like it was a dream. It felt like I’d never done that stuff. But watch how I shake this world up now—I want reparations.”

While Mystikal prepares for world takeover and demands reparations, Prodigy immediately got to work. Maybe he understands that the odds are against him, especially considering album sales were decreasing before the imprisonment, or maybe he’s going to let the work speak for itself. Regardless, the window of fame and relevance is short, and in order for it to stay open artists have to cultivate a reason for being heard. Prison unfortunately doesn’t give anyone a platform to do that. When our fallen heroes re-enter society, we’ve moved on and expect them to catch up. So far, few have been successful in doing so. Prodigy has the tough task of jarring the window open and regaining the career he once had. As his peers have demonstrated before him, that it is no easy task.