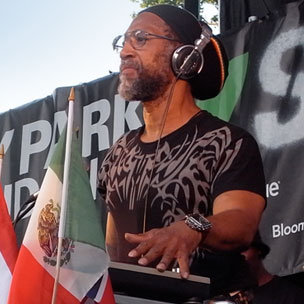 Get Your Mind Right: Why So Serious?

“You know what I’ve noticed? Nobody panics when things go ‘according to plan.'”
– The Joker

Let me just say this up-front, so that the hooked-on-phonics-worked-for-me-ass ninth graders who read my column won’t miss it due to a television-shortened attention span: What happened to Representative Gabrielle Giffords (and the others killed/injured in Arizona last month) was a tragedy. The situation that DJ Kool Herc is in is a tragedy. I wish them all the absolute best, and in no way wish to minimize their respective pain and suffering.

There is a great deal of you-know-what going on with respect to the Congresswoman’s shooting. I’m not referring to the handful of (really interesting) conspiracy theories floating around about the motive for the shooting or its architects. I’m talking about the media-induced preoccupation with Giffords. From an objective, critical thinking perspective, the hyper focus/concern/sympathy concerning what happened to her is hard to explain, to put it lightly. To put it heavily, it makes no sense.

According to The Washington Post, on Saturday morning January 8th, 2011 just before 10 a.m., Giffords drove her luxury SUV from her midtown home to a Safeway supermarket just outside Tucson city limits. The grocery store is in an affluent suburb named Casas Adobes, complete with Spanish-tiled roofed houses, a Whole Foods market, gelato shop, an organic bakery and a dermatologist clinic. Minutes later, 20 people were shot, six of them dead. Among them was a federal judge and a nine-year old girl named Christina-Taylor Green, who was born on September 11th, 2001.

A compelling story, no question…with plenty of subplots. “National attention” immediately focused on Congresswoman Giffords who, apparently the primary target of the gunman, survived the attack despite being shot at “point blank” range. The Obamas held a national (televised) moment of silence for the victims. For weeks, television reporters swarmed Giffords hospital, home, congressional office, friends, and family covering every possible angle of her recovery. Doctors who have never even seen (much less treated) her were interviewed and asked for their expert opinion on her condition and prognosis.

You know what got lost in all of the focus on Giffords? The fact that in this country people get shot and killed everyday.  Consider the following statistics reported by the Center for Disease Control (CDC) in 20071:

Granted, I don’t watch a lot of television. But the little that I did see regarding the Arizona shooting was all about Americans “coming together” and “prayer” as the appropriate response to this tragedy, which side of the aisle to blame, and, of course, gun control. President Obama’s statement was reflective:

“What Americans do at times of tragedy is to come together and support each other, so at this time I ask all Americans to join me and Michelle in keeping all the victims and their families, including Gabby, in our thoughts and prayers,” he said. “We are going to get to the bottom of this and we’re going to get through this.“

Where’s all the “coming together” and “support” for the other 18,355 homicide victims who died in the past year? What makes the Arizona victims so special? Gabby Giffords has gotten more national media attention and public sympathy than Amadou Diallo, Oscar Grant, Sean Bell, Abner Louima, and Aiyana Jones. Combined.

And she lived. WHY SO SERIOUS?

There seems to be a bit of a bias when it comes to valuing life in America. Some people’s lives are clearly more important than others. This (thanks for asking) is extremely problematic and one of the roots of the same gnarly tree of liberty and justice-for-all that my ancestors hung from.

The unspoken rule when it comes to calculating how important an individual’s life is in our society goes like this: Those who contribute to the mythical American Dream are valued in proportion to their contributions. These include soldiers, businessmen, teachers, preachers, students, community “leaders,” pop culture entertainers, married couples, blue-collar workers, doctors and “humanitarians.” Let’s call these folks “heroes”. Those individuals who do not contribute to the mythical American Dream are not valued at all. These include protestors, organizers, question-askers, single-parents, the unemployed, the homeless, handicapped, and those on welfare. In our world, these folks are the “villains.”

Hip Hop reflects the exact same type of thinking, but applied with a twist. Hip Hop doesn’t just celebrate or embrace the winners. Hip Hop reveres those individuals who used to be losers, but somehow crossed-over to the winners’ side. Don’t believe me? Try this: Close your eyes and visualize the first rapper that comes to mind. (Don’t tell me who it is yet). Okay, now I want you to visualize what that rapper does (or would do) if they weren’t a rapper. In other words, I’d like you to try to imagine what that person’s role or function in society would be if they were not in the music industry.

Okay, got it? I’ll bet you he or she has some version of a rags-to-riches story. Either he was a drug-dealing hustler-turned-millionaire or a contestant on a recent season of America’s Next Top Rapper. He either goes hard in the muthafuckin’ paint or else everybody knows he’s a muthafuckin monster. And I’ll bet you something else: you have no earthly idea what that person does or did outside of rap (other than one of the aforementioned muthafuckin occupations). Hip Hop never was about the streets. Hip Hop is about getting out of the streets. By the way, this is why Hip Hop has such a cushy seat in higher education these days. It’s movin on up…all part of a plan.

The reason the rapper you imagined fits the bill is because they all (to some degree) fit the bill. Seems like that’s all Rap is about these days, fitting the bill. Have you ever wondered why most of the rappers you know are wildly successful thanks to their hard work, or genius, or skills, or whatever, but most of the hard working, brilliant, talented people you know in real life are struggling? Don’t let the smooth taste fool you: The same mythical American dream that encourages us to value some lives over others is present in Hip Hop too.

In 2008 I spoke at an event at Winston-Salem State University which featured DJ Kool Herc. Thanks to some really great organizing (shout out to Chelli) the event was totally free to the public and extremely well-attended. After Herc performed, however, I was baffled to see him walk to the back of the auditorium and proceed to sell DJ Kool Herc paraphernalia (CDs, t-shirts, etc) from a make-shift booth.

Trust me when I say that few experiences (personal or professional) have stupefied me more than seeing the man most folks credit with being the original purveyor of Hip Hop music and culture nickel-and-dime it, at a Hip Hop event no less. DJ Kool Herc (and the rest of the founders) deserve 50 times more respect and admiration than subsequent generations of hip hopers give them. Herc’s creative contributions in particular go largely un-acknowledged, as thousands of deejays and tens of thousands of emcees profit off of his genius and years of dedication to his craft. Meanwhile, of course, the Hip Hop scholars at the event collected hefty honoraria for their impressive Hip Hop scholarly-ness.

Fast-forward to 2011, and reports abound that Herc is in financial trouble and needs help paying medical bills. There was a ferocious public outcry (at least on Twitter) of “Support Kool Herc” sentiment. I even saw one effort to get successful rappers to pawn their chains and send the money to him. DJ Tony Touch recently tweeted that he planned to take up a collection to help pay for Herc’s medical bills at a Tony Toca event. Through his blog, Hip Hop icon DJ Premier was quoted as saying the following regarding the struggling pioneer:

“Since he’s very sick and has no insurance, uses a metro card to get around, needs to pay his bills so he can get out of the hospital, it’s ill… If you don’t know about it, now you know about it. …We spoke today, and he needs some help to pay his bills for the hospital because he can’t hold it down. And being that he is the man who set this whole culture off, ya’ll should be wanting to do it any type of way that you can. People know how to reach us.”

I completely understand and applaud DJ Premier’s concern and efforts to do something about this. But let’s be honest: none-a-yall would be do-gooders were the least bit concerned about this brother’s finances in the last say, I don’t know… 30 years. Aside from a few fleeting bars by a handful of dedicated rappers (most notably in my book, Black Thought) Hip Hop ain’t did shit for DJ Kool Herc. So excuse me if I’m not moved that all-of-a-sudden the general public wants to be caring and compassionate.

Instead, I’m struck by how much traction this story is getting, given the fact that there are literally millions of people who are very sick and have no health insurance. Again, for those who like statistics, (this time from the U.S. Census Bureau2):

What about all the nameless, faceless masses of downtrodden, marginalized men, women and children who suffer and die every single day because of poverty-induced sicknesses? Where’s all of the talk of taking up collections for them?

Oops, almost forgot: They didn’t “start a culture.” They were born villains, and they made the unfortunate decision to stay villains. They are unimportant and deserving of their plight in life… after all, they could change things if they only put their minds to it…right?

Such a self-hate perspective is precisely what the real bad-guys want you think. They continually parade situations like Herc’s and Giffords’ in front of us to encourage us to focus on and blame the poor, undeserving, seemingly random victims of the machine; rather than identify the machine as the problem. People, en masse, are struggling.  It is not worse when someone famous is struggling too.

Get Your Mind Right: DJ Kool Herc is not more important than you are because he is a Hip Hop legend. Gabbie Giffords’ life is not more valuable than yours because she is a congresswoman. The perspective that allows us to mourn and care for some members of society while ignoring and castigating others is as insidious as it is hypocritical.