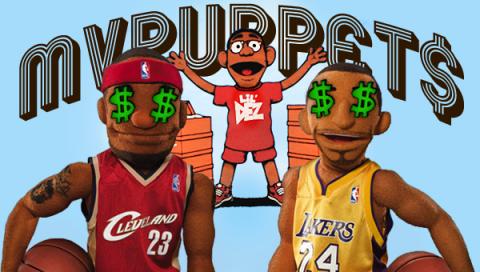 Get Your Mind Right: NBA Puppets

“Dunkin’ on that Reindeer” is the latest commercial in Nike’s MVPuppets ad campaign, starring Kobe Bryant and Lebron James puppets, with holiday themes, and the voice of KRS-One.

The premise itself is a riot: Blitzen, a rogue reindeer in Santa’s stable, is overtaken by jealousy at the thought of Santa hanging out with Kobe and Lebron. He records the equivalent of a reindeer diss-track, challenging Santa (played by KRS) and the two MVPs to a game of basketball; which prompts Santa to drop a response track chronicling the ensuring battle.

“…in the kitchen cookin: eggs & hash / got a call from Blitzen, talkin trash / Ol’ Saint Nicky, can’t you see / You and your boy’s you’ll neva beat me… You can tell Kobe you can tell Lebron / and they can meet me on the court it’ll be uh uh on…“

Humor aside for one second, the track itself is produced well-enough for Top 40 radio. The beat is actually a hybrid of multiple Rap genres, sporting an old school boom-bap cadence over Death Row-era piano basslines, highlighted by clever Young Jeezy-esque punchlines. And, the cinematography in the video would make Hype Williams himself proud – as it clearly borrows from some of his late ’90s conventions.

Once upon a time, I would have been outraged at the clear, in your face, “exploitation” of Hip Hop by corporate America, in this case:  billion dollar athletic apparel giant Nike. I would have seen this commercial as another in the long list of co-opted, commodified renderings of black art; what Duke professor and author Dr. Mark Anthony Neal has referred to as the “corporate annexation of black popular music.”  Or better yet, in the words of Dr. Christopher Johnson: Danceable capitalism.

After all, the video is “shot” on the playground in the hood (despite the fact that James, Bryant (and ostensibly, Santa) are multi-millionaires). And there’s the nagging but all-too-familiar caricature of black masculinity (remember Lil Penny?).  Not to mention the uber-clever colloquial parodies used in the song…for example… Santa is in the kitchen cookin (“hoodspeak” for preparing crack to be sold); and Blitzen is shortened to “Blitz” which sounds virtually identical to another b-word stereotypically associated with Rap music.

But before we scream foul… let’s consider this: Hip Hop marketing has been around almost as long as Hip Hop itself. Life in our monetary society necessitates persuasion of others, and Hip Hop is far from an exception. If you have a problem with Nike leveraging Hip Hop to sell sneakers to “urban youth” than you also have to have a problem with Pfizer selling pharmaceuticals to the sick, CNN selling “news” to the uniformed, Walmart selling food to the hungry, Hollywood selling movies to the bored, Covergirl selling makeup to those with low self-esteem, and universities selling education to the ignorant.

Speaking of news: If you’re one of those people who is “offended” by corporate America’s use of Hip Hop to increase profits, here’s some news: America IS a corporation. Hip Hop (like everything else we ascribe value to) is a product; we are the workers.

I was temporarily confused when I heard the story: Arenas, a multi-million dollar athlete, had pulled a gun on teammate Javaris Crittenton (who in good form promptly returned the favor) over a gambling dispute. The confusion quickly gave way to sympathy for the athletes (human beings) involved, as I realized that the corporate-media machine was already using this tragedy of sorts to make even more money.  Instantly, the focus was thrust upon Arenas as the offender, the criminal, the proverbial “bad guy.” Now I know what you’re thinking…far be it from me to defend him; after all he did have (and brandish) a firearm. Gasp.

What bothered me and made me feel for him was how many of my educated friends, colleagues (you know who you are), family members, acquaintances, and students saw this as an opportunity to discuss the problematicity of black masculinity.  I swear I heard 31 different versions of “See, that’s what’s wrong with black men…”   If you’re reading this column, you probably did too.

What you didn’t was hear “See, that’s what’s happens when you exploit human beings” or “See, that’s what happens when you rob a grown man of his dignity and then sell it back to him.” You didn’t hear that one single time. (I don’t have the space to go into it here but please understand that for every dollar Arenas, Bryant, and James earn, their bosses make 10. Thus, even though the scale has changed, the power dynamic has not.  For a wonderful analysis of this see William C. Rhoden’s book Forty-Million Dollar Slaves.)

Perhaps the reason we didn’t hear any of that is because that’s not what the commercials say.  The commercials say “Good or bad, right or wrong, ugly or pretty, this is about the players.”  Like “Dunkin on that Reindeer,” we’re encouraged to think that it is the players that entertain (or in Arenas’ case horrify) us; when in reality they are just puppets moving according to the whims of masters that hide far above the court in luxury boxes. Those masters only come out when one of the puppets forgets his role and decides to do something on his own volition.  Like, oh, I don’t know… react in a manner consistent with his upbringing. At one point growing up, Gilbert Arenas Jr. lived with his dad Gilbert Arenas, Sr.

When that happens, the sirens go off for us, the viewers, but for the puppet master all is well.  That’s because wayward puppets don’t threaten him, after all, they’re just puppets.  Instead, the puppet master capitalizes on this opportunity to strike awe in the hearts of the viewers by showing just how masterful he really is.  I once heard a ventriloquist say in an interview that the key to being successful is to realize that “No one laughs at the dummy, dummy.”  In other words, when the smart-alecky dummy makes fun of the ventriloquist, it is the ventriloquist who laughs- all the way to the bank.

And so it is with puppets in the NBA. Get your Mind Right: Kobe, Lebron, and Gilbert serve as the most recent reminders of an age old lesson.  He who laughs last, laughs best.