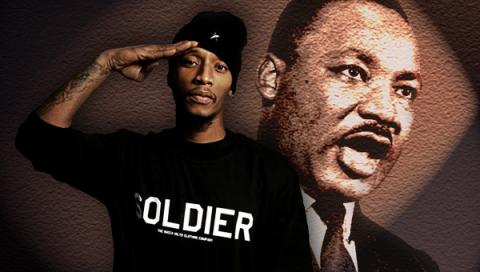 “I Have A Dream that one day this nation will rise up and live out the true meaning of  its creed: ‘We hold these truths to be self-evident, that  all men are created equal.” – Dr. Martin Luther King, Jr.

This is an extremely powerful statement made by the great Dr. Martin Luther King.

Of course he is one of the most prolific speakers and most profound individuals ever to walk this green earth. That’s to say the least.

The impact that Dr. King has made on this entire nation and the world  is forever etched in the fiber of existence.

He spoke for the Poor Peoples Campaign, spoke out against the war in vietnam and injustices for black people  and people all over the world.

“Normalcy, Never Again” was the original title of what we now know as the  “I Have A Dream Speech.”

Dr. King helped to reshape this nation along with many other contributing activist.

He helped black people gain equal voting rights, he help smash the segregation barriers so people of color and African Americans living in this great nation can experience that “Dream.”

Where some may say a dream deferred, others beg to differ. I have heard “a man with no vision will perish” so we live to fulfill our dreams.

That dream that Dr. King had that inspired him to share this vision with humans everywhere in the form of a speech.

Mind blowing… the power of words that is, as Dr. King so passionately illustrates.

Some of you rappers should do some history on the power of word.

As is says in The Bible, “And The word became flesh..”

I think Dr. King’s words and his actions spoke volumes and was in accord with the struggles and passions of the common American people who love their country and believe in that “Dream.”

“… that one day this nation will rise up and live out the true meaning of  its creed: ‘We hold these truths to be self-evident, that  all men are created equal”.

And because of men and women who have dedicated their very beings to these type of ideals like Dr. King, we have lived through and continue to experience a constant evolution in the hearts and minds of the American people and people all over the world.

Dr. King quoted Thomas Jefferson when he spoke out against the political theory of that day: Divine Right of Kings and in this nation’s United States Declaration of Independence. “We hold these truths to be self-evident, that all men are created equal.”

To this day people all over the world work tirelessly to get closer and closer to making that dream a reality.

“One day this nation will rise…” and people will get together not for WAR but for PEACE and the promise of life for today’s families and tomorrow’s children. That’s similar to the horrific situation happening to our brothers and sisters in Haiti right now.

There are nations and people from everywhere who are coming together to help in many different ways. In times of tribulation, we the people triumph.

We have come along way and we quite possibly have a long way to go, but like the marches on Birmingham and Washington, we get through it together.

A dream deferred I think not! One may even say a dream come true.