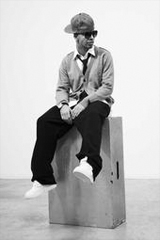 Get Your Mind Right: The Depressed Leaders Of The New School

But that was 1991; things were different in those days. Following is an unapologetic, unobjective analysis of the latest versioning of the new school, seemingly led by Drake and Kid Cudi (yawn).

Twenty-two year old Canadian Aubrey Drake Graham is Young Money’s newest young prospect. Officially signed to Lil Wayne’s [click to read] imprint last June, Drake has a long music and acting pedigree. His father was a professional drummer who played with Jerry Lee Lewis (of “Great Balls Of Fire” fame). Despite not yet having dropped a solo album, he’s already recorded with mega-stars Jay-Z [click to read], Kanye West, and Mary J. Blige, and ghostwritten for Dr. Dre‘s evasive Detox. Before gracing the mic, Drake played the role of Jimmy Brooks on Degrassi: The Next Generation, a Canadian teen drama television series. His first official “debut” album Thank Me Later is expected out on Young Money Entertainment/Universal Motown sometime this year, which seems to be a quick turnaround by major label standards.

Kid Cudi (aka Scott Mescudi) is another mixtape prodigy, a classic Ohio success story about getting discovered by the powerful person passing through. This time the millionaire rapper in question was Kanye West, who (legend has it) heard about Cudi after hearing his music on the Internet. After vocal and writing credits on Kanye’s 808 & Heartbreak [click to read], Kid Cudi has more than enjoyed the media circuit, with appearances at the 2008 MTV Video Music Awards, and late night TV shows like Last Call with Carson Daly. Cudi also has plans an acting career, with an upcoming role in an HBO comedy series called How To Make it in America where he plays Domingo Dean, a character based on himself.

Despite the striking similarities between Drake and Kid Cudi (both are actors, both got signed by artists who made their own names on labels named after money, neither graduated from high school), they are different from the recent trend of microwaveable, gimmick emcees with a cute song or dance but without substance. Make no mistake, both Cudi and Drizzle are very, very nice.

But several glaring differences exist between the Dinco D./Charlie Brown era and the new crop of youngsters vying for mass media attention. The ringtone-infested industry of today itself would be barely recognizable to those guys. Perhaps the most interesting contrast can be seen in Hip Hop’s recurring bout with depression.

According to the National Institutes of Health, clinical depression affects an estimated 19.5 million Americans annually, or approximately 10% of the general population. From a treatment perspective, the “common cold” of mental illness is difficult to treat because many simply do not recognize the signs or symptoms that something may be wrong. Nowhere is this more apparent than in Hip Hop.

“I Just Wanna Be Successful.“

Something is most certainly wrong, namely the fact that the most interesting thing about Drake, etc. is their fascinating uninteresting-ness.  Their hallmark is a pleasant detachment from reality; almost a passing wave goodbye to happiness-where Black Cards, $300 jeans, and promiscuous model types substitute for contentment.

Trust me, I get it. The new school’s major function in life is not to reject mainstream, but to re-version it. After all, resistance at this point is a thing of the past; a footnote in Hip Hop’s history book. N.W.A. [click to read], Public Enemy [click to read], and A Tribe Called Quest [click to read] exist only in the collective memory of those “old” enough to remember them. For everyone else, they represent valiant warriors in a now-over war; heroes whose accomplishments warrant memorials but not airtime; nostalgia but not tangible inspiration.

Most of those worthy icons from the era of resistance have long-since acquiesced. When tortured with the ready promise of riches, those who once cursed the system now are the system. Those that didn’t defect to Hollywood ended-up trapped in an exile of obscurity. Those that did are responsible for creating the Common [click to read] as conscious-slash-Gap-endorsement Post Modern Rap reality we’re currently witnessing.

The common thread, of course, is that the depression in the music was organic. That is, one could always pinpoint the source of these artists angst and discontent. Anger was focused; displeasure was targeted. Society was to blame.

“Wayne, if you’re on Mars can you pick me up from Jupiter…“

At some point, that society-driven depression stopped being society-driven and started being viewed as an individual phenomenon.  Conspicuously absent from most of today’s depressive tales of life is any reference to the societal conditions that produce such depression in the first place. It is as if these kids were born unhappy. Somehow, we are supposed to feel them despite the fact that 99% of us listeners aren’t bi-coastal Rap stars picking out condo furniture on iPhones between shows, nor do we park our Rolls Royce Phantoms five houses down the block so that we don’t embarrass our mothers.

Whether it’s Kid Cudi posturing as a “lonely stoner,” Lil Wayne’s identity as a Martian, or Drake’s above quip about being from an even ‘further gone’ planet (ostensibly alone), we see a repeated insistence on separating oneself from the rest of legitimate culture. In a December 2008 interview with VIBE, Drake was quoted as saying: “I’m an actor. I’m not a thug who decided to be in a movie and play himself. I’m not reppin’ a hood, I’m not claiming a set, no street shit. I try and keep my lyrics triumphant.” Far from being the voice of the hood; these kids are claiming to be the exceptions to the hood…a sort of depressed misfit who accepts the shallow commercial worldview associated with dollars despite being disconcerted by its overwhelming pathology.

It’s all right there in the music:

“And to my city I’m the 2-3
Drug dealers live vicariously though me
I quit school and it’s not because I’m lazy
I’m just not the social type and campus life is crazy.” – Drake, “Say What’s Real.”

“Day n nite. I toss and turn, I keep stressin’ my mind, mind.
I look for peace, but see I don’t attain.
What I need for keeps this silly game we play, play.
Now look at this.
Madness the magnet keeps attracting me, me.
I try to run, but see I’m not that fast.
I think I’m first but surely finish last, last.” – Kid Cudi, “Day N’ Nite”

Maybe I’m the one on the spaceship here, but nobody from the old school just wanted to be successful. From Godfathers DJ Kool Herc, to Afrika Bambaatta to Nas to OutKast [click to read], to Wu-Tang Clan [click to read] to M.O.P. to Jean Grae [click to read], Hip Hop has always been about community. Again, what these antiquated relics have in common is social commentary; for the most part they were upset about real life.

Now, there’s a definite sense of normalcy tied to the new school experience of depression. Whereas old-schoolers (e.g. 2Pac, Scarface) were much more raging and uncomfortable with it, the new class would have us believe that the greater issues are fine and that they are depressed because they don’t fit in.

In fact, let Drake tell it, the game needs change and he’s the cashier. This is exceptionally difficult to reconcile with the fact that he looks like, sings like, and eventually will advertise products for corporate America just like most of the commercially successful rappers before him. Just like Jay-Z’s recent sham of a rebellion better known as “D.O.A.,” Drake and the leaders of the new (new) school seem intent on convincing us that they represent some sort of change.

Now where have I heard that before?

Maybe their mentors are to blame. After all, no one (except maybe with exception of L.O.N.S. member Busta Rhymes [click to read] himself) has pushed the creativity envelope in Hip Hop further than Lil Wayne and Kanye West. Perhaps it really is no surprise that their musical progeny is breaking tradition by refusing to bring the hood with them. Get Your Mind Right: In order to appreciate Drake, etc.’s dope-ness, one has to imagine the pseudo-reality that their rhymes are based on, a fantasy-land stage performance where they somehow stand apart from the masses of unemployed, unhappy, marginalized folks out here struggling just to get by.