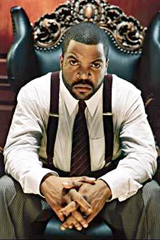 Famous musicians have been acting in and impacting American cinema for quite a long time now. Classic American music icons like Frank Sinatra, Elvis Presley, Madonna, Bob Dylan and Mick Jagger all made the jump from the recording studio to the Silver Screen. While there is no shortage of pop stars turned actors, the one musical genre that seems to have the best transitional track record thus far is Hip Hop.

When Ice Cube (Boyz n The Hood, 1991) and Tupac Shakur (Poetic Justice, 1993) made their big screen debuts for director John Singleton, film critics and Hip Hop fans alike were surprised and amazed by their performances. Both movies were hits at the box office, nearly grossing a combined $84 million. In addition, both movies cast a successful, easily identifiable, rapper in a dramatic role. A trend that would become popular in the forthcoming years.

However, these movies did not make big waves in Hollywood because, although Boyz and Justice were among the first films to star a rapper, they were labeled as “black films.” This was because neither film had stars from Hollywood’s A-list (give or take a Larry Fishburne), nor did they receive any attention from the Academy Awards. However, that would all change in December of 1993 when Six Degrees of Separation was released, starring Will Smith. Smith’s performance was met with critical acclaim, and now serves as prelude to his multi-million dollar acting career. Even so, Smith lacked the street credibility afforded to other rappers because of his affluent West Philly upbringing and squeaky clean image. Although Hip Hop was knocking at the door, it was not yet in the building…

Nine years later in 2002, this metaphorical door would be kicked down when five Rap artists were featured in films and plays that won top awards. Will Smith was nominated for a “Best Actor” Oscar for his portrayal of Muhammad Ali in Ali; P. Diddy appeared in the highly acclaimed controversial film Monster’s Ball with “Best Actress” Halle Berry; Snoop Dogg appeared with “Best Actor” Denzel Washington in Training Day; and Mos Def became the first rapper to star in a Broadway play, the Pulitzer Prize winning Topdog/Underdog. And of course, Queen Latifah starred alongside Academy Award-winners Rene Zellweger, Catherine Zeta-Jones, and Richard Gere in Chicago.

Since then, the trend has continued. Today, more rappers are being cast in major film productions than any other genre of music, and more than ever before. And they are breaking the mold of what a rapper can portray on-screen. Artists like Ice Cube, DMX and Ice-T had set the standard for stereotypical portrayals of gangsta life. Although those roles are still available, nowadays, rappers have branched out and opened themselves to portray other roles that step away from these stereotypical depictions.

The motion picture industry has embraced Hip Hop artists for very good reason. They believe that their star power and marketability can appeal to a wider audience because it will attract the rappers fan base, which can translate into dollars at the box office. The relationship is even more beneficial when artists link their names to lucrative soundtrack deals, often complete with singles and/or videos that promote the movies themselves.

But this explanation may be too simple to explain the success that several artists are enjoying on the big screen. For example, LL Cool J has appeared in more than 20 different motion pictures and television shows, including Any Given Sunday, S.W.A.T., & Deliver Us From Eva. Since his Doughboy debut in Boyz n The Hood, Ice Cube’s filmography boasts 27 films, including starring roles in Higher Learning, the Friday trilogy, Three Kings, The Player’s Club, Barbershop (1 & 2), and xXx State of the Union. And the undisputed king (or should I say prince) of rapper/actor land, Will Smith, (Bad Boys 1&2 , Independence Day, Men in Black 1&2, Enemy of the State, Ali, Hitch, The Pursuit of Happyness) has a total of 19 films to his credit, as well as the highest average box office draw of any actor ($112.3 million) in the ’90s and the third largest average draw of all time.1  That puts him ahead of Harrison Ford, Tom Hanks, Denzel Washington, Tom Cruise, Mel Gibson and Seth Rogen.

Perhaps even more interesting is the fact that James Todd Smith, O’Shea Jackson, and Willard Christopher Smith, Jr. have all made more movies than albums. And they are not alone. The leap from Hip Hop to Hollywood is becoming less of a leap every year. Today, bonafide artists like Common, Mos Def, Eminem, Method Man, 50 Cent, and others are routinely cast in major films. The effect has been a blurring of the lines between the art of storytelling and the storytelling of art.

You Ain’t Livin Your Rhymes Out

In other words, it is difficult, (if not impossible) to distinguish between the artist and their entertainment product. This is especially true for young kids who generationally missed albums like Death Certificate and Lethal Injection but know all about movies like Are We There Yet? Somehow, in music recording, there is an implicit assumption that what we are getting is the unfiltered truth- reality interpreted by the artist. Thus, many are shocked and appalled when artists are “exposed” for living lives contrary to what they say on wax.

Hollywood’s recent effect on Hip Hop can be seen all the way on the opposite coast. When Rick Ross, the rhyming Miami embodiment of drugs, crimes and all-things-illegal was recently shown to have “done time” as a Corrections Officer for the state of Florida, people were shocked. Critics trashed him while the public mocked him, led by 50 Cent who predicted that Ross was “done” as an artist in a verbal fight that included the rappers’ mothers, kids, and former girlfriends. But… Ross’ very next album Deeper Than Rap was released on Def Jam shortly afterward, and sold a reported 158,000 copies in its first week, reaching #1 on the Billboard #200 earlier this year.

Q:  Given rap’s long history of finger-pointing and “keepin it real” accusations, how could someone be shown to be a phony and then enjoy such commercial success?

In a movie, no such assumption about reality is made. When we see Morpheous, the leader of a space-age band of rebels fighting an army of intelligent machines in The Matrix trilogy, nobody searches for contradictions in Laurence Fishburne’s life. With movies, we are supposed to view the two as separate; actor as different from the character portrayed. But this is where it gets a little tricky, as this is where Hollywood’s influence comes in.

Hollywood is more than a place, it is an institution. To make it in Hollywood one has to be interesting on and off screen. Dozens of television shows about actor’s real lives and hundreds of tabloid magazines make it clear that there’s more to being a star than one’s craft. We are led to believe that the actors’ real lives are just as interesting as the roles they play- and all of this feeds Hollywood’s success. Our celebrity-obsessed, media-saturated society thinks for us when it comes to decisions about reality. Sadly, millions of people look for reality on television every single night.

Evidence of our skewed thinking comes from psychological evidence that suggests that we often overlook situational or contextual information and focus on personality characteristics when making decisions about reality. It seems that we have an overriding tendency to view the origins of behavior as personal, rather than as influenced by the immediate environment. Psychologists refer to this tendency as the Fundamental Attribution Error (FAE), and research has identified and examined its implications for decades. For example, imagine waking up sick with swine-flu symptoms. You go to the emergency room and wait for two hours. When you (finally) get in to see the doctor, she appears rushed, distracted, and direct, and spends a total of four minutes treating you. If you decide that the physician who treated you is a you-know-what, you may be overlooking aspects of the situation that contributed to your doctor’s behavior (e.g. perhaps there’s a swine-flu epidemic and you’re her 73rd patient that night, maybe she’s worried about her own sick child on the floor below yours, etc).

Similarly, we often make the error when it comes to the movies. It is very tempting to view actors as possessing “good” or “bad” personal qualities based on the roles they play. Some actors just seem like good people, others seem like villains. But, this is a flaw in decision making, because to make such judgments is to overlook the obvious:  they are after all, just acting.

Don’t Let the Melody Intrigue You

I would argue that this is precisely what we are observing in Hip Hop. Our Hollywood conditioning makes it easy for us to look for personal explanations for behavior, when perhaps the situational explanation provides better answers. All too often, we expect and even demand that rappers live the lives that they rap about; even though we know that the music industry is just that, an industry. The context is all about making money…this is the reason rap albums are made, the reason music videos are shot, the reason why artists go on tour, the reason why the ring-tone was invented. To quote a previously mentioned rapper/actor Sean Combs, it is literally, All About The Benjamins.

And therein lies the explanation for artists like Rick Ross’ success despite their seemingly fraudulent behavior. At the end of the day, we are more comfortable linking Rick Ross to William Leonard Roberts II than we are acknowledging the truth: William Roberts only portrays Rick Ross to make money.

At the movies, it’s no big deal to see a self-proclaimed murderer in a romantic comedy; apparently the same now holds true in rap music. If we don’t believe what actors do on set, we certainly shouldn’t believe what rappers say in the studio. Get Your Mind Right:  Hip Hop has more than reached Hollywood, Hip Hop has become Hollywood.