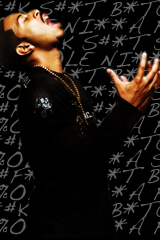 Get Your Mind Right: The Dirty Version

I’ve always been one to appreciate a well-timed cuss-word. Sometimes, only a good old-fashioned expletive will do.

Apparently, though, I’m in the minority on this… conservative music industry do-gooders seemingly want to take all the fun out of rap music these days. Here’s why.

A euphemism is a substitution of an agreeable or less offensive expression in place of one that may offend or suggest something unpleasant to the listener. For example, instead of saying “fuck you,” one may say, “forget you.” Instead of screaming something blasphemous like “Jesus!” one can opt for “gee whiz!”… and everything is fine.

Hip Hop is full of clever uses of the euphemism. Tone Loc’s 1989 smash hit “Wild Thing” [click to read] immediately comes to mind (the word “sex” is not mentioned once in the entire song) as does his more explicit follow-up “Funky Cold Medina” [click to read]. Of course, terms like “money maker,” “jump-off,” “brain,” and the ever-popular, “skeet-skeet” are all Hip Hop euphemisms for sexual activity, not to mention the millions (okay, dozens) of examples of annoyingly vague sexual euphemisms used in Pop/R&B (e.g. “milkshake,” “London bridge,” “goodies,” etc). There are also a bunch of classic euphemisms for drugs: “snow white,” “raw,” “dro,” “sizzurp,” “white girl,” “cook-up,” and on and on (and on).

The very use of euphemism in rap, however, may represent a bit of a paradox when one considers the fact that much of Hip Hop music is (by design) a rejection of standards, morals, and values upheld by mainstream society. One could argue, for instance, that the satirical sting in a name like Ol’ Dirty Bastard is lost when we refer to him as O.D.B. or that the offensive, renegade spirit that birthed Niggas With Attitude [click to read] is muffed when that art is filed away under N.W.A.

But, strategically used, the euphemism adds to- rather than takes away from the brilliance in rap music. Ice Cube’s [click to read] classic ode to naïve parents “Givin’ Up the Nappy Dugout” is, well, a classic. Slightly more subtle is OutKast’s “Jazzy Belle” [click to read], a veiled allusion to Jezebel, the original archetypal Biblical woman of ill-repute. And let us not forget 50 Cent’s [click to read] tribute to his own male genitalia, via Lil Kim‘s “Magic Stick.”

More recently, euphemism use has grown to epic proportions in Hip Hop- with rappers taking the art of disguising their real meaning to another level. Soulja Boy’s [click to read] “Crank Dat (Soulja Boy)” [click to read] is the best selling digital download of all time, with current U.S. digital sales of over 5,000,000.1  Plies’ [click to read] tremendously successful “Bust It Baby” [click to read] probably fits into this category as well (since according to him, any real “Bust It Baby” knows what being one is all about), as do “wifey”, “boo” (bitch), and “shawty.”

Indeed, an interesting discussion is why certain euphemisms dominate the Hip Hop lexicon but are conspicuously absent from other genres of music/culture. One could argue that “wifey” (one’s committed love interest) is non-existent outside of Hip Hop because no other cultural frame of reference has been systematically excluded from the institution of marriage in the manner that Blacks have been historically in this country. Such logic would also explain beautifully our creative euphemisms for wealth (e.g. “ballin!”)  and their virtual total absence from other musical venues such as those referred to as Rock & Roll, Smooth Jazz, Country and Heavy Metal. Similarly, the myriad Hip Hop euphemisms for police and law enforcement (e.g. “Jake,” “One time,” “5-0,” pigs, etc) are almost certainly borne out of Blacks’ disproportionately high engagement with crime. On “Sound of Da Police,” Hip Hop legend KRS-One [click to read] goes as far as to claim that “officer” is actually euphemism for “over-seer.”

Repeat it very quickly in a crew for example

You need a little clarity?

The overseer rode around the plantation

The officer is off patroling all the nation

The overseer could stop you what you’re doing

The officer will pull you over just when he’s pursuing

The overseer had the right to get ill

And if you fought back, the overseer had the right to kill

The officer has the right to arrest

And if you fight back they put a hole in your chest!

(Woop!) They both ride horses

Nonetheless, psychologically speaking, euphemisms catch a bad “Rap” among language experts because they tend to reduce the communicative ability of language. For example, if one said, “Travis slept with Ashari…” to the listener the intended meaning might be unclear, because “to sleep with” is a common euphemism for sex. Did Travis sleep with Ashari, or did Travis sleep with Ashari?  Context clues are needed for clarity. This explains why most rap verses and songs are unintelligible to the uninformed listener who does not have familiarity with those situations, scenarios, environments, and experiences shared by those in the Hip Hop community.

Another relevant issue pertaining to euphemisms in Hip Hop has to do with the recent trend in rising vulgarity, profanity, and explicit content. From one perspective, the euphemism is becoming more and more useless as language becomes increasingly expressive and overt.

FC See What I Mean?

Thanks to a Supreme Court ruling last week2, broadcasters (of any size) can be fined as much as $325,000 for sending out a single expletive over the public airwaves, even if the offensive word is unintentional. According to the ruling, television and radio broadcasters can be required to offer families a “safe haven” from foul language; upholding the Federal Communications Commission’s (FCC) 2004 crackdown on inappropriate and obscene language over the airwaves.

Censorship, of course, is not new in Hip Hop. Record companies, labels, radio stations, and artists have dealt with legal issues related to censorship for more than 25 years. In her seminal essay on race and gender in Hip Hop titled “Beyond Racism and Misogyny:  Black Feminism and 2 Live Crew,” Kimberle Crenshaw dissected the controversial federal court ruling that sexually explicit lyrics in 2 Live Crew’s [click to read] album As Nasty as They Wanna Be were obscene. Days after the ruling, the members of the group were arrested and charged under a Florida obscenity law for performing songs from the album in a club in Hollywood, Florida. Although it was not Rap’s first battle with censorship (or its last), the 2 Live Crew case provoked one of the most intense and notorious public debates about sexism, violence, and the First Amendment this country has ever seen.

Of the many issues that surround the broadcasting of illicit material, there is one that often gets overlooked:  how effective is the censoring of so-called swear-words in music?  Parental advisory warning labels on CDs and “bleeps” over songs on the radio are assumed to shield listeners from inappropriate words. For years, artists have routinely released different versions of songs (mostly singles) and albums, one for radio broadcast and one for private consumption, usually labeled “clean” and “dirty” respectively.

A couple of recent examples:

“Bust it wide open, den I tell her bring it back.“

“Bust dat pussy open… den I tell her bring it back.“

At issue is whether or not the major thrust of these songs is actually changed by substituting a word here or omitting a word there. I happened to be listening to the radio the other day and heard the following lyrics, verbatim, from Lil Ru’s aptly-titled “Nasty Song.”

“‘Cuz a this here another nasty song…

“‘Cuz a this here another nasty song

I love the way she fuck with no panties on…

Now I say won’t you put the pussy on me

yea girl I said won’t you put the pussy on me.”

Ironically, in similar fashion, the firestorm that surrounded the 2 Live Crew album served to catapult its sales, securing a career lane of indecency that translated into millions of albums sold for the now legendary group.

Which leads me to believe that maybe, just maybe, the music industry knows this as well. Perhaps they know that putting a “clean,” strategically edited single out on the radio and for the music video is a sure-fire way to piqué interest in the real album…complete with all the “dirty” content that we crave.

Get Your Mind Right:  In Hip Hop, censorship is euphemism for “marketing ploy”.