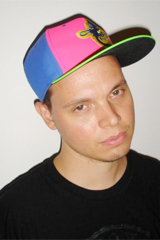 Hip Hop fans world wide are always on edge, always searching for that new sound, that new style, anything that deviates from the norm.  Chances are, if you’ve ever spent time in the D.C., Maryland, or Virginia areas, known collectively as the DMV, it’s been right under your nose. Though new to most Hip Hop fans, this mix of Hip Hop and Club music aptly dubbed B-More Club, has been the signature music of “Bodymore, Murderland” for years.

After introducing the world to B-More Club with their last release, B-More Gutter Music, deejay/producers Aaron Lacrate and Debonair Samir [click to read]. Are back to drive the point home with their latest installment, B-More Club Crack [click to read]. This compilation comes across as an almost perfect blending of traditional Hip Hop beats with the bass heavy thump club music is known for. Using all local artists and beats inspired by the Baltimore club scene, Lacrate and Samir have been trying to give there city a voice and help the music find its way to the heart of hip-hop and dance music fans across the globe. Here to break down some of what went into cooking up B-More Club Crack is one of the main men heralding the region, Baltimore’s own, Aaron Lacrate.

“That’s the Baltimore slang. Every album has a skit or an interlude that brings some originality. That’s a bonus track of local flavor. That’s a free trip to Baltimore. I loved the intro. [Jeneeba is] just giving you a little bit of Baltimore. Like she talked about the ‘half and half.’ The ‘half and half’ is a snack box that’s half chicken and half french fries. It’s like a local phenomenon or something. You get your ‘half and half’ and put salt, pepper and ketchup on it, and that’s it.”

“Rockin’ With The Best” by Verb featuring Eliza Doolittle

“‘Rockin’ With the Best’ was crazy. That was the perfect combination of me, [Debonair] Samir and Verb. We all came together doing what we do best. I came up with the idea for the song, I wrote the chorus, I mean it’s not the most original chorus, but I wrote it. This girl from London named Eliza Doolitle, who is signed to Lily Allen‘s label, and actually – I was involved in Lily Allen‘s success. Verb is the only one who helps Verb. He doesn’t even write rhymes like that. He keeps all his shit in his head. So we went in he heard the beat, I came up with the pig latin shit on the pre-chorus. Verb did the rhyme, Samir did the beat, and I made sure everything was arranged well and made sure the record sounded like a hit. That record really shows the growth between the final product and what we submitted as the original project. This project really tied in all our resources into one. Verb is the dope lyricist and I’m the guy that’s supposed to know all the right people. I’ve also been a deejay my whole life so I should know how to arrange a hit record.”

“That’s probably the best fusion between Baltimore Club and Hip Hop. It’s one of my favorite records off the album. D.O.G. is one of the most notable emcees in the city. He had a deal with Universal before, and he’s put in tons of work over the years. He’s just one of those artists that have been out there grinding hard and it shows on this record. That’s easily one of my favorites.“

“Hit The Road” by King Slixta

“This beat is out of this world. I was glad to see the way it turned out. When Samir and I started working together, he had already done some tracks with a couple local artists and I was telling him ‘Yo, this shit is dope.’ One group was called The Dirty Hearts. Inadvertently, I ended up signing Verb and Slixta, who were members of The Dirty Hearts, to Milkcrate Records. I had the link at Koch [Records] and they were like, ‘We saw the thing on The Wire and we love the music so lets put out a record.’ We were blow away ’cause we signed the deal with Koch in 2006 within like three months of us coming together deciding to do this compilation. They sat on the record for like three years but, sonically, the record is very next level. But still, we went back and scrapped the album. It’s a 60% new album, [the] same way a lot of 50 [Cent’s] Get Rich Or Die Trying [click to read] was supposed to be [Dr. Dre‘s] Detox, a lot of the stuff we did were beats we planned on using for something else and ended up going to our artists and ending up on this project.”

“Everybody On It” by Mz Streamz

“The single is ‘Oh My Gosh,’ and the B-side is Mz. Streamz‘ ‘Everybody On It.’ Koch serviced it to nationwide radio, but I’m not sure how hard they’re really working it. Samir‘s been working with her since she was like 10 years old and she’s 17 now. Her mother’s always around, as well as her manager. We’re all very serious about her. That was a great record for her.”

“The Real Is Back” by Mullyman

“Everything in Hip Hop right now is about flossing and showing off and all that shit. This record is not about that. This is one of those songs where he’s just real with it.“

“That beat is on some club shit but its some slower shit than the regular B-More Club music. That beat is crazy. Like it’s almost like you don’t know what’s going on with it. It sounds like it’s from outer space. And Verb is just talking about what goes down on the club scene out there with a few local shout outs.”

“Tear It Up” by Mz Streamz

“‘Tear It Up’ by Mz. Streamz is probably the best representation of the B-More sound. The beat, the song, Streamz’ flow, everything. If I had to pick one record that represents the B-More club sound It’s definitely this one.”

“A lot of the world doesn’t want to know or want to accept this as a musical genre. All those people can listen to something like this and hear the true honesty of all the artists on here from this city. They’re not all Jay-Z [click to read] lyricists, but what’s more interesting is that we’ve set up a situation for all the artists who may have never been heard.”

“There’s a lot of people that tend to be interested in the seedier side of what’s going on. That’s just what it is. Baltimore can be a perverse, twisted town with the crime and murder and everything else that’s going on. He’s just telling you how his hood is different from most places.”

“That was one of the Aaron Lacrate big ideas. I love Dancehall. When you’re a Hip Hop deejay, you have to play Dancehall as part of your set. You play your east coast, down south, old school and Dancehall. For me, it was my chance to combine to artists from two of the most notorious cities ever. How can two of the worst cities in the world make a crazy, party hit.

Swizz Beatz  [click to read] just jumped the beat for ‘Oh My Gosh.’ That’s Samir’s first beat. It’s been out for years. It’s like the biggest Baltimore club record ever. The most beautiful thing about the record is there’s no samples in it. It’s not the typical Baltimore record. You can’t even describe that as Baltimore because it’s become so much bigger than anything else from Baltimore has ever been. It’s a world hit. The biggest deejays in the world from Hip Hop to House all play that record. No other Baltimore club record can claim that. We wanted to put Vegas on that record. But Swizz Beatz jumped on that beat. That just happened like yesterday, so this is breaking news.”

“Me growing up in Baltimore, we’ve always been waiting for our own lane. Everything was the same in Hip Hop and we were all waiting to see when’s the club music going to jump off, when’s the Hip Hop going to jump off. Even though all the deejays played both, it was still just a local phenomenon. And still, to this day, the city doesn’t have much of a presence in music. And Samir and I pretty much have been trying to build that. This record is one of those kinds of records that can help do that.“

“Put Them Drinks Up” by J Wildz

“This is one of the guys who has been grinding it out. These are the artists that have put in a lot of work and are doing the same thing that we’re trying to do. We have the club shit and we have the Hip Hop shit so for someone who wants to understand the B-More scene you need to listen to this.“

“Name Ya Hood” by Keesh

“Keesha is a stripper. She’s not even signed; she’s not trying to rap. This was beyond Rap, what we made. This project is the essence of what Rap is supposed to be about. It’s about the struggles of your city and voicing that. Telling people about the struggles of your community over a dope beat. The girl is not trying to rhyme dope. Its just her voice, something in her that’s more special than just being a dope lyricist. That something special is more rare.  I tell people all the time that B-more is like the next South Central.“

“‘Bodymore’ is my beat as well. It’s one of the first club songs I ever put out. There might have been some criticism about that. I mean, I don’t know. My thing about Baltimore is I grew up there and spent the first 19 years of my life there. I feel like I can pretty much describe the city any way that I want to. The city is what it is. I’m not the person to call an apple an orange.”