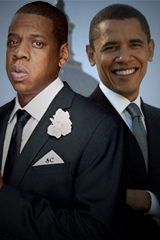 Get Your Mind Right: Barack Obama Is Jay-Z

Jay, of course, campaigned heavily for the 44th President of the United States. Obama, at one point, made headlines for referencing Jay-Z’s 2003 anthem “Dirt Off Your Shoulder” (complete with gesture). There it is, proof positive.

Besides the fact that the two have never actually been seen in the same place at the same time (okay, maybe they have- but you can do anything with technology these days), consider a few other astonishing similarities:

Jay-Z is worth an estimated $547 million dollars, and is (by his own admission) in pursuit of a billion. Barack Obama recently gave away $700 billion in “stimulus” money.

Without Jay-Z we wouldn’t have such classics as The Blueprint and Reasonable Doubt. Without Barack Obama, we’d have John McCain.

3.    Both work for corporate America.

Jay-Z has advertised for everyone from Reebok to Budweiser to Hewlett Packard…Not to mention the companies that he actually owns himself. Barack Obama is President of the United States of America.

4.    Both have written bestselling books that nobody has actually read.

Okay, so technically the Black Book, Jay’s mythical autobiography with legendary Hip Hop journalist dream hampton didn’t actually come out. But, my boy read it and said that if it had come out, it “woulda been hot.”  Obama’s The Audacity of Hope was #1 on the New York Times Bestsellers List and has been translated into at least 14 languages. Note: no word yet on what “audacity” means.

5.    Both have careers made possible by reasonable doubt.

If Jay-Z gave away $1,498,630 every single day for an entire year, he would still be a multi-millionaire simply off of accrued interest. Barack Obama hired Timothy Geithner.

8.    Both have profited from the drug game.

“Can’t you tell that I came from the dope game/

Blame Reagan for making me into a monster/

I ran contraband that they sponsored/

Before this rhyming stuff we was in concert.“

9.    Both have been on Sportscenter; despite the fact that neither plays a professional or college sport.

To be fair, Jay-Z does own part of the New Jersey Nets, and thus does have legitimate pro sports relevance. Obama picked the Tarheels to win the NCAA Men’s Tourney in his bracket.

10.    Both have dissed former associates because they were bad for business.

Both Damon Dash and Jeremiah Wright have legitimate beef with their respective former homeboys. Dash helped mastermind the Roc-A-Fella empire only to end up in relative obscurity, while Jeremiah Wright inspired Obama’s historic speech at the 2004 Democratic National Convention and its follow-up bestseller (see #4) only to get thrown under the bus by the President-to-be for keeping-it-real in his own church.

11.    Both claim to stand for change but are well-known for politics as usual.

A hallmark of Jay-Z’s illustrious career has been his ability to keep it real. Literally. Few artists have been as successful and as candid on wax about their real lives as Mr. Carter. In 2005, Mr. Carter became president of rap’s “Oval Office” when L.A. Reid appointed him as Def Jam’s president. The prevailing thought was that Hov would usher in a new era of urban music business…but disgruntled artists (e.g. LL.Cool J, Peedi Crakk, Tiarra Marie, Joe Budden) complained of run-of-the-mill industry antics. Time will tell as to whether or not Mr. Obama will change anything in the good ole’ U.S. of A.

12.    Both have spent substantial time in courtrooms.

Jay-Z has had a couple of highly publicized run-ins with the law (“I ain’t pass the bar; but I know a lil bit…“). Before winning his Illinois Senate seat, Obama earned a law degree from Harvard, where he served as President of the Harvard Law Review.

13.    Both of them have single-handedly shelved numerous careers.

15.    Both rep the hood despite the fact that they wear makeup on TV.

Jay-Z, like his famed Brooklyn predecessor The Notorious B.I.G. is said to never write down his rhymes. In fact, the story goes that the two legendary rappers first found out that neither was into writing during the studio session for “Brooklyn’s Finest.” Jon Favreau (who cut his teeth on John Kerry’s 2004 campaign) is Obama’s head speechwriter, but anywhere from three to seven high ranking advisors are reportedly involved with the speech-making process for the Commander in Chief.

The Secret Service has agents assigned to approximately 125 offices located in cities throughout the United States and in select foreign cities and employs approximately 3,200 special agents, 1,300 uniformed division officers, and more than 2,000 other technical, professional and administrative support personnel…all whose primary directive is protecting the President of the United States. Jay-Z (like every other drug dealer turned Rap star) has had the Feds on his back for years.

20.    Both have compared themselves to Superman. Seriously.

Jay on Kingdom Come… Obama during a speech during the Inaugural Ball.

And there you have it. Coincidence? I think not. Get Your Mind Right. Barack Obama is Jay-Z.