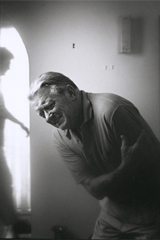 Get Your Mind Right: Domestic Violence

In college I used to joke around with one of my teammates about how he was going to end up beating the shit out of his future wife one day. He was suave; ladies loved him. Still do. But his womanizing ways made all of us wonder how long it would be until some woman did something bad enough for him to choke her or slap her or whatever.

One of the interesting things about rap music is its tendency to bring out the critic in people. Carl Jung, the famous Swiss psychiatrist once said “Everything that irritates us about others can lead us to an understanding of ourselves.” I believe that he was on to something, mainly because as individuals we are all influenced by one another. No one lives in a vacuum. On a philosophical level, one’s actions are not really one’s own actions- they are really just reactions to an earlier action provided by someone else.

This immediately brings Hip Hop music and culture into the discussion, because Hip Hop is nothing more than one particular reaction to oppression and marginalization. At its core, Hip Hop was founded on the rejection of mainstream modes of thought, dress, dance and art. Without the ghetto, Hip Hop never would have existed.

“But wait…” you say “…how is it that the rejection looks so much like the original?”  A close look at early Hip Hop may provide some answers.

And your eyes will sing a song of deep hate…“

The Furious Five‘s words from “The Message” capture the essence of life lived in the atrocity of sheer poverty. The verses illustrate the weird realities of hood life- events and scenes that simply don’t make sense until you live them. But the song’s true brilliance likes in the hook, which reveals the real issue.

(“You don’t have to do anything to mess me up; I’m already on the verge of destruction.”)

I’m trying not to loose my head

(“Simply trying to live is killing me.”)

(“It’s a miracle that I have not been consumed by the craziness already.”)

“The Message” (and countless other early Hip Hop narratives) acknowledges the fact that even though individuals may perpetuate madness, violence, hate, etc; the real issue is the societal circumstances that produce such problematic behavior. Which is all the more startling once you consider how things got to be the way they are. To quote Nas: “It’s elementary; they want us all gone eventually.”

Social Learning Theory (Bandura, 1986) describes how individuals learn how they should behave by observing other people’s behaviors and the consequences of their behaviors. In a nutshell, the individual is influenced by personal factors (e.g. emotion), environmental factors, and behavioral factors (e.g. smoking) that all interact to determine learning. A key construct in social learning theory is modeling. Modeling refers to the process of learning by observation, in a monkey-see, monkey-do sort of paradigm. So then, if, as a society, we’ve collectively learned to be violent…who have we learned such behavior from?

The easy answer is of course: “the media.” As pointed out earlier, there is violence all over the airwaves. But perhaps this is a lazy answer as well. Maybe, if we were to examine ourselves, we would see that violence isn’t just preached to us from a media minister behind a propaganda pulpit; it lives inside of us…calling out for redemption.

But domestic violence is even more complicated than that. It is easy enough to see how one might resort to violence against a known, clear adversary. It is another thing altogether to explain the mentality of someone who lashes out against his own loved ones. Perhaps the answer lies in perception. What if the aggressor actually perceives the loved one to be an enemy?

What’s Love Got to Do

Much of what really happened during America’s period of chattel slavery has been lost, perhaps never to be found or brought to light again. But what we do know tells us that in many ways, black men were taught (in fact, in most cases forced) to view and treat his black feminine counterpart with distrust, aggression, hostility, and violence. Life on the plantation for women ranged from hell to hell, with hell in between. They were pressured to live the life of the exposed double-agent: constantly pandering to her white masters for mere survival while simultaneously clinging to her black male counterparts for humanity and sanity.

One result of this fractured version of community and all of the roles that came along with it was that the black woman was forced to do things that her black man hated. Like fuck the master and bear his children. Like feed the master and nurse his babies. Like worship the master and value his property.

It is not difficult for me to see how generations of black men forced to endure such reality might come to mistake their sisters for their enemies. The assault on black masculinity was (is) so pervasive that it warped men’s minds enough to turn them against their one shot at freedom: Love.

Thus, a little over 100 years post-emancipation we are still witnessing the effects of black love on life support. In his reaction to white supremacy the black man has done exactly what the black woman has done: the only thing he could. When faced with a reality of having to deal with used up, fucked up, sneaky, plotting, selfish women he began to acknowledge those aspects of her persona and accept her, albeit on a conditional basis. This explains beautifully why, in much of contemporary Hip Hop, the woman is only appropriated if she meets certain criteria- the most important of these being loyalty.

I’m a Man With Pride…

Rap music is filled with the construct of female loyalty. Rappers love glorifying women who are loyal or “ride or die” and castigating women who can’t be trusted to stick around, despite any and all circumstances. We see it on The Notorious B.I.G.’s “Me and My Bitch”:

“…But you was my bitch, the one who’d never snitch

Love me when I’m broke or when I’m filthy fuckin’ rich.“

“Rewind us back, to a time was much too young to know

I caught a felony lovin’ the way the guns blow

And even though we separated, you said that you’d wait

Don’t give nobody no coochie while I be locked up state..

“Shit I’m a man with pride, you don’t do shit like that

You don’t throw away what we had, just like that

I was just fuckin them girls, I was gon’ get right back.“

These are thousands of verses like them are profound considering the affectionate use of the term “bitch” and the attribution of value to the woman based almost exclusively on her allegiance to an often undeserving man. Busta Rhymes [click to read], Snoop Dogg, 50 Cent [click to read], Big Pun, Ludacris [click to read], and countless other artists have songs about loving “bitches.” I would argue that the term “bitch” itself represents the paradoxical duality inherent in loving someone that you are forced to hate. Black men have essentially been forced to hate the women they love and love the women they hate.

Women on some levels embrace it as well. Lil Kim’s moniker of “Queen B” actually refers to her posture as the “Queen Bitch.” Missy Elliot has referred to herself as a bitch, as have Trina, Foxy Brown, Eve, and a long list of female emcees. Consider the psychological trauma that one must go through in order to use a verbal weapon like “bitch” as a term of endearment. And “bitch” is just the beginning!  Our Hip Hop lexicon assaults women on a constant basis. Look at all of the sexual lingo that connotes violent imagery. “Beat,” “cut”, “stab,” “smash,” and “hit” are all colloquial euphemisms for sex. I still don’t know what the proper name for “wife beater” is.

Unfortunately, as we shall see, it is not a large leap to go from verbal assault to physical assault.

According to 2006 statistics, nearly three out of four (74%) Americans personally know someone who is or has been a victim of domestic violence, and approximately 30% of Americans say they know a woman who has been physically abused by her husband or boyfriend in the past year1. These statistics are higher in the black community. The Journal of Family Violence reported in 1990 that 72% of abuse victims felt that emotional abuse was harder to endure than physical abuse, and research suggests a direct link between verbal abuse and later physical abuse in relationships.

If we return to B.I.G.’s “Me and My Bitch,” we get a clear admission of just how direct the link can be.

“And I admit, when the time is right, the wine is right

I have heard theories of domestic violence that say that because Black men have been marginalized by society and denied personal autonomy, they may be prone to essentially “taking it out” on their women. Author Kevin Powell for instance, calls this phenomenon “bootleg masculinity.” I’m not convinced that this explanation holds. Look at what Biggie is saying: “Everything could be fine; but guess what: as soon as you mess up, that’s your ass.”

I have not heard anyone ever criticize the late great Christopher Wallace for this sentiment. Nor am I out to do so here. My point is that maybe the reason why a 300 pound black man gets a pass for rapping about beating his woman “right” is because we silently acknowledge that he is touching on a deep, sore wound inflicted on us all during slavery.

I do not advocate silently dealing with this issue. We ought to talk about it in the open. Sure, I regret joking about domestic violence with my old teammate, but I do think that our open and honest discussions about how women can make us want to explode were healthy and proactive. And for what it is worth, we were wrong about him (as far as I know). But talking about domestic violence is difficult as long as we continue to blame the victim.

Mark Anthony Neal, associate professor in the Black Popular Culture Program in African and African-American Studies at Duke has pointed out how Hip Hop is not the first black art form to contain violence towards women. According to Neal, the black legacy of violence includes notable figures like James Brown, Jackie Wilson, Patti LaBelle, Ike and Tina Turner and others. Hip Hop is not causing anything. It is reflecting.

Which is why I was not surprised to read that Rihanna is going back to Chris Brown. There are probably multiple reasons why battered women go back to the men who abuse them. Rihanna’s example says that money, fame and celebrity have nothing to do with the psychology of abuse. Perhaps she went back because she felt the same pressure that untold millions of black women felt before her; to love her man in spite of himself.

Get Your Mind Right: You can’t beat that.