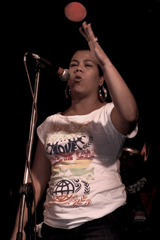 “Why should I listen to a system that never listened to me?” – Jay-Z.

Election season is one of the most confusing phases of the political cycle. Messages, slogans and propaganda fly through the air like chocolate milk in a food fight. All of a sudden, it seems, America is interested in what you think. So much so, in fact, that you are urged to speak your mind. Raise your voice. Vote.

Since Hip Hop is usually thought-of as a big middle-finger to the establishment, what are those who endorse said-finger to do when it comes to the right to vote?

The first step in answering such a question is to consider who (or what) it is that people cast their votes for. The party system in the United States is a complex hierarchy of constantly changing leaders, followers, and constituencies. Kinda like Def Jam. For example, the progressive, or liberal party used to be the Republicans. Swear to god. Once upon a time, it was the G.O.P. that was considered progressive, and the Democrats who were predominantly conservative.

“Founding Fathers” Thomas Jefferson and James Madison are widely credited with founding a group called the Democratic-Republic Party in 1792 as a congressional caucus to fight for the Bill of Rights and against the elitist Federalist Party. Thus, even though the modern Democratic Party didn’t take shape until almost 40 years later, the Democratic Party is still the oldest party in this country. The Republican Party was organized in the mid 1850s in opposition to the legislation that would have allowed the expansion of slavery into Kansas. Besides opposition to slavery, this new party put forward a progressive vision of modernizing the United States. (We don’t know how blacks would have voted for most of this era because blacks couldn’t legally vote until 1871). But we do know that the African American majority vote in 1932 was for Herbert Hoover (a Republican).

Since its inception, the Republican Party’s chief opposition has been the Democratic Party, but the 20th century saw all sorts of interesting political twists and turns. For example, after Reconstruction (started by Republicans), most of the white south identified with the Democratic Party. Before 1948, white southern Democrats saw their party as the defender of the “southern” way of life, which included a respect for states’ rights and an appreciation for traditional southern values. Thus, the biggest cause of the political transition, of course, involved civil rights. When segregation was outlawed by the Civil Rights Acts of 1964 and 1965, many white voters resisted integration, led by Democratic governors like George Wallace of Alabama. Meanwhile, newly enfranchised black voters now supported Democratic candidates at the 85-90% level.

Martin Luther King, Jr. was a Republican. According to the National Black Republican Association Republicans founded Historically Black Colleges and Universities. Republicans are credited with starting the NAACP for crying out loud.

So, before we get all wrapped-up in rhetoric around change, we should consider how the very party system that we now acknowledge has changed historically. In fact, the entire notion of only two parties is a farce. According to USA Today, in 2007, almost 72 million voters were Democrats. Another 55 million were Republican, and Independents made up a whopping 42 million Americans.

That’s a lot of Independents.

Today there are several viable political parties with an astonishing diversity of programs, platforms and ideas for governmental leadership. Most notable are the Libertarian and Green Parties. The Libertarian Party is America’s third largest and fastest growing political party, created in December of 1971 by people who realized that the politicians had strayed from America’s original libertarian foundation, with disastrous results. The Green Party is committed to environmentalism, non-violence, social justice and grassroots organizing- without the support of corporate donors, and is led by Cynthia McKinney and noted Hip Hop journalist and activist Rosa Clemente.

It is ironic how many candidates use “change” as their primary platform, given the fact that our entire political system has been literally defined by change since its earliest days. The same pattern of reversal that we see with the Republicans and Democrats can be seen in the careers of individual elected officials as well. The list of politicians who have said one thing in an effort to get elected only to do another once in office is too long to even begin here.

What I will mention, though, is how difficult it is to find evidence of any meaningful change. In other words, I’d argue that for all the superficial changes we’ve seen over the course of American political history, things have remained essentially the same. Our school systems suck (researchers in education have been lamenting the educational crisis since the the 1950s). Our economy sucks (no further discussion needed). Healthcare sucks (unless you’re self-employed, in which case it really sucks). Foreign policy sucks (except for the war on terror, that is). The environment sucks (then again who needs gas anyway). Every year crime goes up, every year more people get sick, every year more people starve.

And Joe the Plumber. I don’t mean to sound grim, but things don’t seem to be going very well these days. And I have a job.

Watch for the Hook

So what would I say if I didn’t have a job? How would I feel about things if I didn’t know where my next meal was coming from, or where I was going to sleep tonight? What would my take be on the election if my son got sick and I couldn’t afford to pay someone to look at him, much less the medicine needed to make him better? That is the reality for millions in this country, and hundreds of millions more worldwide.

I wonder what they would say.

And so should you, because guess what: “they” are becoming “us”. “They” are those that started this thing we call Hip Hop. They are the ones who originally decided to depart (socially, physically, and psychologically) from a system that seems bent on seeing them fail. If anyone should know how bad things are, it’s them.

In truth, we don’t really need to wonder what they’d say. All we need to do is listen. Fuck the police….fight the power….Cash rules everything around me…it’s all right there in the rich artistic history of Hip Hop. It’s in the baggy jeans, it’s in the graffiti on the train, and it’s in the pistol on the waist. Hip Hop over the last three decades has provided not only a soundtrack for the marginalized, but also a screenplay. Even our collective comodification by corporate America screams of resistance…but that’s another subject altogether. I know six CEOs who own their own their own company. Five of them live with their mother.

My point here is that for all of the supposed change that we go through, nothing really is different. We love talking about what happened in New Orleans as if somehow Katrina taught us a lesson. It’s almost as if we want to believe that Katrina came through and ruined people’s lives, just so that we can live with ourselves. The reality is that the system that failed those folks in Louisiana and Mississippi after the storm came failed those folks long before the first rain cloud formed. The system that is (as I write) perpetrating unprovoked violence on citizens in the Middle East is the same system that did so to untold black communities during Jim Crow. The system that prevents decent, intelligent, men and women from providing for their families in this country is the same system that ignores genocide and atrocity in Somalia, Rwanda, and Darfur. And yes, the system that offers less than $7.00 an hour in minimum wage to employees is the same system that can cough up $700 billion dollars to bailout their employers.

Hell no… we won’t

I believe that a true Hip Hop sensibility is one that not only recognizes the lie in America’s promise of freedom, equality, and justice for all; but rejects it. Whether you’re a woman who makes two-thirds of what your male co-workers make for doing the same job or an immigrant who gets discriminated on because of your accent, Hip Hop speaks to your experience. It is the profoundly simple acknowledgment that the system has never, does not, and will not look out for you. We are forced to do that for ourselves.

What’s interesting about both of these “movements” is that both men are on the record as saying that they don’t care who you vote for, as long as you vote. This is one of the most asinine, irrational ideas I’ve personally ever come across. It’s like offering a condemned criminal the ability to choose between the electric chair and the firing squad, and then trying to convincing him that his choice is what really matters.

But, then again, it fits with what we know about our political system’s penchant for pulling the good-old fashioned switch-a-roo.

Get Your Mind Right. Voting (by itself) has never changed a thing for marginalized people in this country. Hip Hop’s current infatuation with the political process is just another example (in a very long list) of our being co-opted by the very power structure that Hip Hop was originally designed to oppose.

I can’t vote for that.