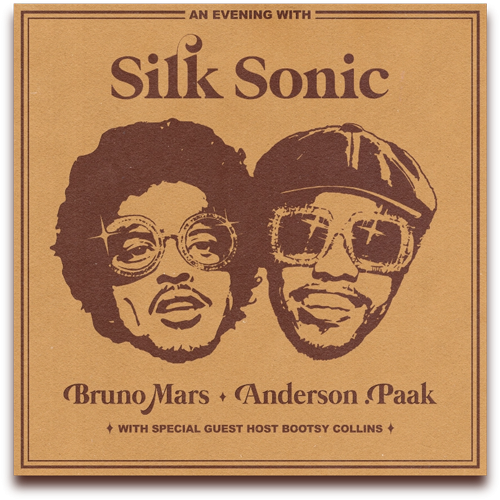 People desperately wanted Bruno Mars and Anderson .Paak — collectively known as Silk Sonic — to breeze in with the best album of the year. And they could have — but didn’t. Their knowledge of bygone eras and ability to effectively pay homage to classic funk and R&B should’ve been a slam dunk.

But instead, An Evening With Silk Sonic has already morphed into nothing more than a novelty, one that thankfully doesn’t overstay its welcome. Clocking in at nine tracks and 31 minutes, Mars and Paak are in and out, delivering their best impression of ’70s funk, soul and R&B — albeit each track is so spit polished and clean, it noticeably lacks the raw charm of the original.

But that in no way means An Evening With Silk Sonic doesn’t have its merits. The singing prowess of Bruno Mars and Anderson .Paak is undeniable — both have the pipes of butterfly collar-wearing angels. Mars’ ability to hit high notes can break glass, while Paak’s raspy delivery is reminiscent of Smokey Robinson or other great R&B/soul singers of the era. They’re also in a rare position where they sound unlike anything else currently in rotation. They’ve created a niche all their own, however, the bar in mainstream pop music has been set so low, anything remotely different feels like the second coming of Christ.

As the “Silk Sonic Intro” kicks in and the voice of prodigious bassist and Parliament-Funkadelic legend Bootsy Collins comes over the speakers, it’s immediately clear Mars and Paak are taking the funk revivalist attempt seriously. Employing Bootsy for anything shows their commitment to the whole schtick and, even more importantly, their respect for the pioneering musicians who came before them.

After a couple “Well, alright” ad-libs courtesy of Bootzilla, they skate right into the album’s lead single, “Leave The Door Open,” which debuted at No. 1 on the Billboard Hot 100 when it was released in March. Despite the success of the single (it also stayed at the top of the R&B Songs chart for a staggering 14 weeks), it’s the infectious “Smokin’ Out The Window” that takes ahold and refuses to let go.

Like most of the lyrical content found on the project, Paak continues to ruminate on the opposite sex but in this case, he’s in shambles over his financial investment in “this bitch” who did him wrong. But coupled with the musical brilliance of a stellar backing band that includes Grammy Award-winning bassist Brody Brown, producer/sound engineer Boo Mitchell (who also has a few Grammys in his arsenal) and, of course, Paak, the verbal lashing is easily ignored as the horns and flutes get sprinkled across the funky bassline and soaring vocals.

“Put On A Smile” again finds Paak’s iron-clad confidence taking a ding as he perseverates on a failed relationship with ghosts of The Temptations providing fleeting moments of pizazz. Gone is the bravado of “777” and “Fly As Me,” and in its place, his wounded heart takes centerstage, a refreshing respite from the “I look so good” thread that sews the project together. Instead of Paak and Mars’ unfettered cool permeating every aspect of the album, there are moments where they show their vulnerability, especially when it comes to women. But even that is expected — Curtis Mayfield, Al Green and Marvin Gaye crooned about it for decades.

The only credited features on the project arrive with “After Last Night.” Dueling bassists Thundercat and Bootsy Collins pepper the seductive track with their signature touches as Paak sings about “that gooshy gooshy good” and admits his player tendencies may be left in the past along with the velvet smoking jackets and giant sunglasses that complete their aesthetic.

After a few listens, sadly, the novelty begins to wane and the Soul Train magic comes to an abrupt halt. Each track soon starts to blend into one another before they ultimately fade into background music for shopping at Banana Republic or Whole Foods. But as they collect their Grammys in 2022 (which we know they will), An Evening With Silk Sonic will assuredly be the soundtrack to Starbucks rendezvous all around the world.

The new silk sonic album is trash? it sounds like it was executively produced by old navy and white moms

How the hell did silk sonic drop such a mid album. FUCK, i was so excited and it mostly sucks?

Silk Sonic too good man. The album has been on repeat every day and I still can't get enough of it!

Silk Sonic’s album is better than Ye’s and Drake’s albums. Fight me.