Pink Siifu 'GUMBO'! Is A Thoughtful Love Letter To The South 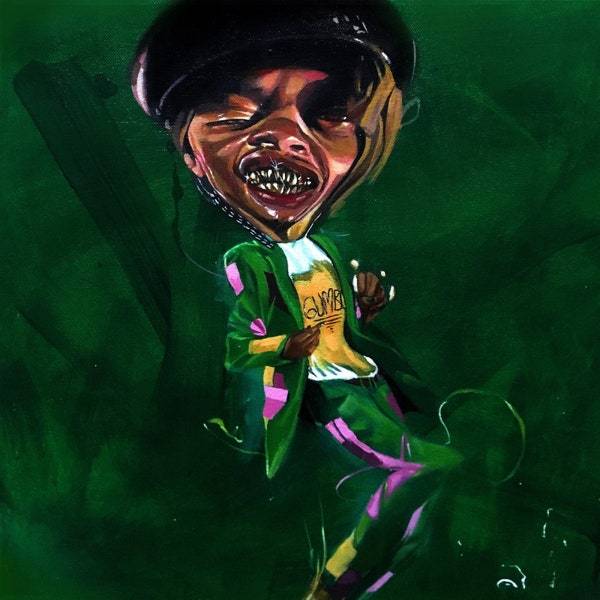 Pink Siifu isn’t afraid to push conventions and make people feel uncomfortable. His last album, NEGRO, addressed political affairs through the eyes of Black America. Siifu used a variety of sounds to trigger a range of emotions, employing freeform jazz that was hellacious and chaotic, evoking the same paranoia and anxiety experienced by Black Americans due to police brutality.

His use of punk rock embodied the boiling anger and tensions of a targeted community. With NEGRO, Siifu created a body of work that wasn’t meant for the faint of heart, instead, inducing cardiac arrest to those oppressing Black lives. Siifu’s latest album, GUMBO’!, poses one question: What does gumbo sound like? Siifu’s answer is a melting pot of jazz, trap, and neo-soul to add as ingredients for his own musical stew.

A spoonful of gumbo evokes feelings of warmth and comfort in spaces shared with loved ones. That same sentiment is applied throughout the project’s 18-song tracklist thanks to a slew of features from Siifu’s close friends (Liv.e, Maxo) and those he considers inspirational (Big Rube, Georgia Anne Muldrow). As he approaches the end of his 20s and anticipates the arrival of his child, GUMBO’! acts as his last hoorah before entering the realm of fatherhood.

GUMBO’! plays like a post-pandemic BBQ, where friends and families haven’t interacted over a long stretch of time. It’s spontaneous and meaningful where every moment comes and goes like flashes of euphoria. The same music meant to provide closeness is the same music able to keep a party going. Whether fans are in need of an elevation of spirit or a moment to let loose of your inhibitions, Siifu is the arbiter of feel-good southern hospitality.

NEGRO found Siifu experiencing emotional epiphanies by the end of each track, but GUMBO’! is his healing process; his chicken noodle soup for the soul. On the album opener, “Gumbo’! 4 tha Folks, Hold On,” which features appearances from Liv.e, V.C.R, Nick Hakim, and DJ Harrison, he croons his way through memories, reminiscing about days of wide smiles and childhood innocence. The Dungeon Family’s Big Rube recites a poem at the end of the track, bringing elders and the youth together, dubbing it “gumbo.” It’s not the first time Rube’s poetry narrates a song, becoming a constant key to connecting the trauma of Black Americans young and old.

Siifu is able to reconstruct genres into his own vision. On “Wayans Bros,” the production dances between trap and industrial, like if Kanye West’s Yeezus was composed in the south. In the first ten seconds, Peso Gordon opens the track with his sights on the police, “Buy me a Glock to shoot at the cops.” Anti-police themes have always been a key aspect in Siifu’s music and GUMBO’ is no exception. He follows Peso’s lead with “fuck 12, all of the cops” delivered in Siifu’s signature whisper, rapping as if he was sharing a secret over a pay phone. “Roscoe’!” is no different. Instead of trap drums and a looped beat, it’s led by a deafening bass line that could rattle steel off of scaffolding.

GUMBO’! pays homage to Siifu’s influences. Like on “Scurrrrd,” when Big Rube opens with a poem on the journey of finding the best version of oneself and being scared to live, then moments later Siifu jumps in with sultry raps over jazz horns and a light snare and snap drum. The track calls back to Outkast’s “13th Floor/Growing Old” off of ATLiens, which also features an intro from Big Rube, another showcase of Siifu’s intentional melting pot of influences.

GUMBO’ is arguably Siifu’s greatest work to date. It’s an album that’s accessible but never treads on its underground street cred or lessens the dusty aesthetic to conform. It’s compact with moments of wonder, tenderness and fun folded into each other. GUMBO’! is as complete as it is essential to Siifu’s discography.

With Siifu’s stock continuing to grow, GUMBO’! represents a level-up moment, a true step forward in his career. They say you lose your window as you grow older but if Boldy James and Freddie Gibbs have proven anything, it’s that age can refine a person. Add Pink Siifu to the list.

@PinkSiifu has an Album OTY contender. This is incredibly beautiful, and needs to be in everyone’s rotation. Press play and let the entire thing ride. Siifu if you see this, thank you man. pic.twitter.com/4SeIzARzyi