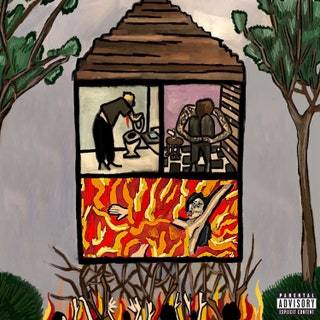 It’s been decades since “suicide pimping” was considered groundbreaking in rap music. Lyrics about loss, mental illness and substance abuse have largely supplanted emotional stoicism and anecdotes about dealing drugs. As a result, when an artist’s songwriting is weak or uninspired, their internal anguish comes across as a disingenuous marketing ploy.

Standing in such a crowded field are SoundCloud era duo $uicideboy$ (New Orleans cousins Ruby da Cherry and $crim). Their most recent single, “Materialism As A Means To An End” has notched a healthy 14 million streams, a far cry from past hits such as “And To those I Love” and “Kill Yourself (Part III)” with their nine-digit sums but respectable nonetheless.

Sales aside, certainly there’s merit in authenticity and directness, but when it comes to conveying grandiose emotions, $uicideboy$ scan as melodramatic rather than tortured. The way they describe misery and alienation on their latest album Long Term Effects of SUFFERING feels trite and cliché, despite their personal experiences with mental illness and drug abuse.

$uicideboy$’s raps rarely lack passion or panache, displaying nimble agility and a developed ear for melody. The technical polish makes their vacant lyrics this time around extra disappointing, rolling through one ear and out the other like water off a duck’s back. It doesn’t take a poet to authentically express sadness but a line like, “People warning me that everything is gonna change/Never thought that it would be in the worst way,” on “5 Grand At 8 To 1” warrants locking down all Hot Topic stores so those lyrics don’t get printed on a cheap T-shirt on the clearance rack.

Or take a song like “Bleach,” where Ruby da Cherry screams “I have become what I hate” before making fun of people who “thought [their] life would be worthwhile” and ended up working salaried jobs to afford a home in the suburbs. His contempt for these imaginary suburbanites is palpable but comes across as angsty contrarianism as opposed to a genuine desire for a more interesting world.

$uicideboy$ are still the next best thing for fans of SoundCloud rappers who whine about heartbreak, depression, designer jeans and the difficulties of being famous. But when they slow down (which is too often), audiences have enough time to not just hear their words but actually comprehend them. If Logic’s anti-suicide anthem didn’t do it for at-risk youth, maybe the $uicideboy$ will have more luck, though with advice such as “When life gets hard/Keep on marching on” (from “The Number You Have Dialed Is Not In Service”), who needs schoolyard bullies? The “grin and bear it” advice seems particularly hypocritical from a duo who frequently say they would’ve committed suicide if they hadn’t become successful artists.

Long Term Effects of SUFFERING’s better tracks are joyful — and even cathartic. “New Profile Pic” features verses that tumble forward with assured momentum despite a lower BPM. “Avalon” has the duo’s most theatrical vocals, $crim’s verse skittering across the eerie beat before Ruby da Cherry turns the track to 11: “Snort a thirty off the .40, let it bust,” he wails. These songs will sound excellent live but also screamed in the car, tuning out boring coworkers or in a dark bedroom with the earbuds too loud for audiologists’ comforts.

The sad fuckboy archetype was established long before the $uicideboy$ were born (possibly with German poet Johann Wolfgang von Goethe’s novel about a love triangle that turns to suicide Sorrows of Young Werther … or Papa Roach), but it has become particularly en vogue for the post-SoundCloud set, whether it’s the robotic anhedonia of NAV or the pop punk howls of alleged abuser Lil Uzi Vert.

While Long Term Effects of SUFFERING’s production choices sound as crisp as pouring a Sprite slowly in a cup with ice, the music doesn’t come anywhere close to the best work of XXXTENTACION, Lil Peep, or Three 6 Mafia — the reason for their existence altogether.

lyrics, production, and everything else aside. Suicide Boys have the hardest beats and that’s undebatable.