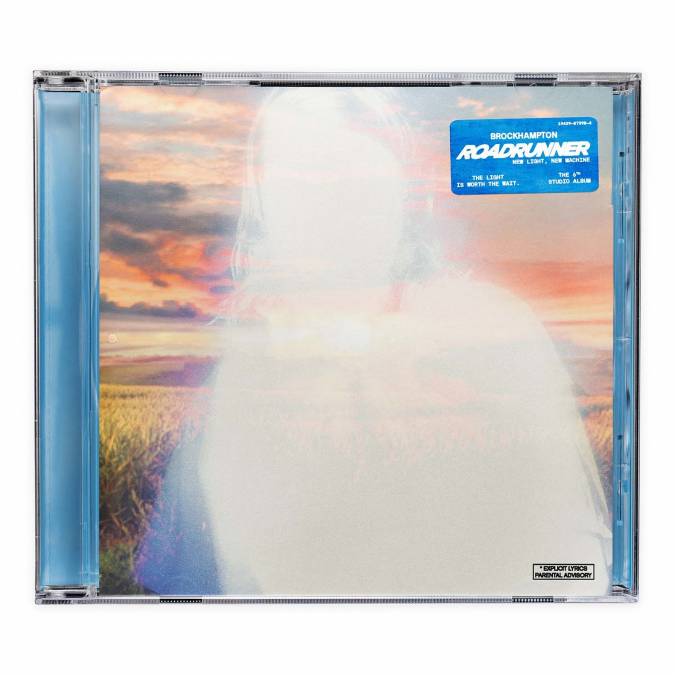 BROCKHAMPTON has been hinting at their “final” album since 2017’s Saturation III and their newest, ROADRUNNER: NEW LIGHT, NEW MACHINE, is supposedly one of two that will put the exclamation point on their four-year run. As a self-described Hip Hop “boyband,” the Texan collective has erected a career on the eclecticism of its 13 members. But as de facto leader Kevin Abstract explained to The Guardian in April, he’s grown tired of the boyband label and wants the freedom to be whatever BROCKHAMPTON wants to be.

And it appears they’ve done just that with ROADRUNNER. Unlike past releases, which have more or less adhered to a certain theme, BROCKHAMPTON’s latest is all over the place in not just production style but also mood. From the explosive album opener “BUZZCUT” featuring Danny Brown to the more subdued, whistle-tinged “COUNT ON ME,” the album swings between full-on bangers to touching, R&B melodies that give Boyz II Men a run for their money (see “DEAR LORD”).

Admittedly, during the first listen of the album, only a handful of its 13 tracks stood out but upon further exploration, ROADRUNNER suddenly blossomed into a sonic garden ripe with introspective brilliance. Like with “THE LIGHT,” Joba starts the song by graphically detailing his father’s suicide and explaining how deeply it affected him. Over haunting guitar riffs and a menacing beat, he bravely dives into the PTSD-inducing scene left in the wake of his father’s death.

“Felt numb since September,” he says. “When I heard the news, what I’d do to speak one last time/Think I always will be haunted by the image/Of a bloody backdrop, skull fragments in the ceilin’.”

Despite the weightiness of the track, BROCKHAMPTON is able to quickly reinvigorate the tracklist with “WINDOWS” featuring newcomer SoGone So Flexy who’s signed to the group’s Video Store joint venture with Rick Rubin’s American Songs publishing company.

In the same vein of ’90s Goodie Mob or Wu-Tang Clan posse cuts, SoGone SoFlexy immediately sets the tempo with his gruff, confrontational rhyming style before Merlyn, Matt Champion, Abstract, Dom McLennon and Joba proceed to murder the ominous beat. Coupled with the sing-songy hook, the track delivers in all the right ways with its razor-sharp lyrics, “fuck the world” energy and roller coaster feel.

Then there’s the playful, summer vibe of “CHAIN ON” with JPGMAFIA, the dancehall-electro of “BANKROLL” featuring A$AP Ferg and A$AP Rocky, thumping boom bap of “Don’t Shoot Up The Party,” soaring, angelic vocals of “THE LIGHT II” that further cement their reputation as a versatile collective.

“THE LIGHT II” also gives Abstract the opportunity to address police brutality with lines such as, “And these days no license, only take the Jeep if my boyfriend is drivin’/Plus he got the kinda skin that make the police like him.”

Meanwhile, Gap Band legend Charlie Wilson gets the chance to shine on “I’LL TAKE YOU ON,” which comes with an infectious, falsetto hook that’s impossible to shake unlike “OLD NEWS,” the only slightly skippable song on the entire effort. The track leans too much toward the boyband side even with the injection of Meryln, Baird, Joba and Matt Champion’s verses.

Even so, hearing a group of twenty-somethings include a clever ode to Wu-Tang Clan’s “C.R.E.A.M.” at the end of the “CHAIN ON,” shout out the late A Tribe Called Quest member Phife Dawg on “WINDOWS” and enlist the production genius of The Neptunes’ Chad Hugo for the piano-ladded “WHEN I BALL” is refreshing in an era where so many new artists want to conveniently forget about their predecessors.

Whether it’s the influence of Rick Rubin’s storied Hip Hop history, their own research or a combination of both, BROCKHAMPTON remains one of music’s most intriguing, nearly genre-less experiments — too bad they’re calling it quits.

Hope you finished it, Ty! There are some bangers on the second half, too!

Can’t please everybody — but maybe give it another spin.