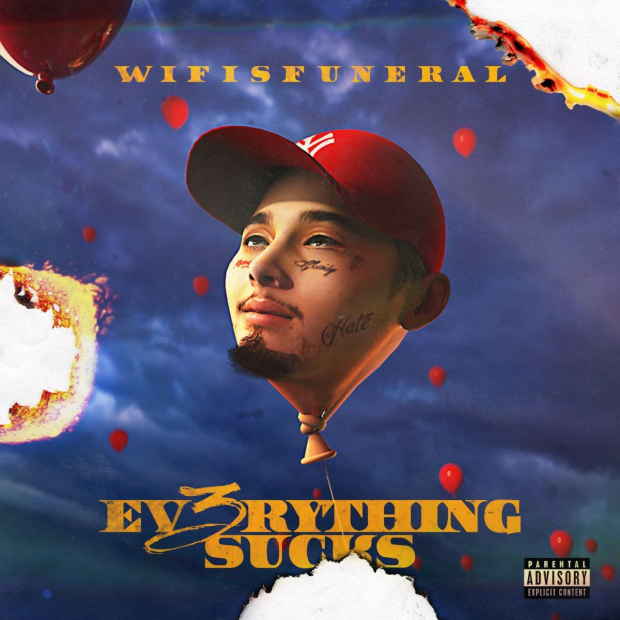 After just two years the SoundCloud aggressive and depressive rap explosion has already entered its post phase. The death of its polarizing leader XXXTENTACION, coupled with the growing commercialization of other stars has left the once prominent scene disjointed from the raw wildness of its early punk influence.

Some notable names though never needed to rely on the unleashed energy to find an audience, as is the case with Wifisfuneral. The South Florida rapper set himself apart from the majority of his counterparts with his rapid catchy flow and higher tier technical ability.

Mixtapes like 2016’s Black Heart Revenge and 2017’s Boy Who Cried Wolf flashed his potential with its head-nodding beats and infectious flow, making music more suited for an emo dance party than a mosh pit.

Since then the Palm-Beach artist hasn’t shown he has much else in his arsenal, dropping off inconsistent projects like 2018’s Ethernet and finishing the year on a low note delivering the cratering slog of sadness Leave Me The Fuck Alone EP.

But 2019 saw the Alamo Records signee starting to return to the style that made him appealing in the first place linking with Robb Bank$ on the lively banger filled Conn3ct3d collaboration. Then he dropped his Ethernet 2 mixtape, a return to form of sorts with enough head bobbers and sad rap songs to give him a direction forward, setting up better material for the future. However, his latest EP, the eye-rollingly titled Ev3rything Sucks, shows maybe the Bronx-bred rapper doesn’t possess the promise he once seemed to have.

Wifi also handles his business on the sporadic piano backed “Split” matching his flow with the groove riding to success. The high points end here though, even when he’s playing to his strengths.

“Peace Sign” sounds like a carbon copy of his track with Roach but lacks the catchiness, while dropping off considerably unearthing an inferior verse from YBN Nahmir. On “Slide” he shows off his agile flow, but a makeshift hook keeps the cut from warranting a repeat.

The dreary and nightmarish production of “Stick” piques some interest, but Wifi again botches the hook diverting into an incoherent slumping mumble. The EP falls even flatter when he dives into his depression and drug abuse on the auto-tuned croon ballad “What You Made Me” lacking the lyrical depth to draw empathy.

Wifi’s flow fests work when he’s using his skills to provide a groove to his odysseys of pill poppin’ and depression. But when he drowns in his sorrow, it becomes too lifeless and slow to enjoy sonically, and not compelling enough lyrically to keep attention.

Technically speaking, Wifi maintains a solid flow on this project. The dude can rap. It’s one of the biggest things that made him stand out when the SoundCloud scene blew up in 2017. But with the linchpins of the sub-genre either honing their style or fading into irrelevance it doesn’t seem like Wifi has progressed much.

It’s just an EP, but if this is the direction Wifi wants to go with his next album he risks his artistry going stale before it has a chance to take off.