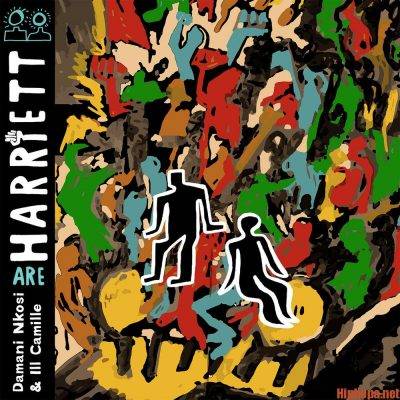 “I am at peace with God and all mankind,” famed abolitionist Harriet Tubman once said to celebrated African American educator Mary Talbert right before the Underground Railroad crusader died in 1913. By then, Tubman had already earned mythological status by freeing hundreds of slaves and supporting Union soldiers during the Civil War. Fast forward a century later, her legacy continues spiritually with Ill Camille alongside storied Inglewood MC Damani Nkosi for their riveting joint project HARRIETT.

Recorded over a year between the U.S., South Africa and Brazil, freedom serves as the project’s core theme. The ten-track album almost stretching an hour is filled with some of the most hopeful and technically intricate rhymes about unfiltered blackness in the face of systemic oppression. All the while, both Ill and Damani spit some of the best bars this year on topnotch production blending alternative West Coast bounce with various influences representing their travels. Fans who have been waiting for a proper follow-up to Nkosi’s 2014 opus Thoughtful King and Ill’s 2017 breakout Heirloom get the absolute best of both plus a lot more.

HARRIETT opener “Alkaligned” sets the tone for the duo to trade bars over a boom-bap instrumental as Nkosi spits, “a simple head nod to reach the inner-god beyond facades gods and false doctrines/we stay locked in the John Crocrin of mic rockin/the flow fit we can’t quit the beat knocking” before Ill raps “Whether you swoll or you holding yo privates/cause you ain’t scared of the digital virus/steadily scanning yo retinas and iris.” Once the beat switches to more tribal drums and they really let loose even more lyrically, both inform listeners on HARRIETT’s ultimate goal – to retrain the brain, heart, body, spirit and soul.

Ill and Damani set the tone for a profanity-free journey of black plight and some fascinating storytelling moments. HARRIETT’s best example of this is “Euphoria” featuring L.A.-based jazz vocalist Teira Lockhart Church. A swinging bounce from producer D.K. The Producer gives way to blaring horn moments as both literally tell each other’s history with a slick level of detail.

Even when struggles of being black in America creates sometimes unbearable anxiety, optimistic two-step of the “Alive” featuring South African songstress Thandi Ntuli serves as the perfect remedy. As both rhymes about battling things like the very real issues of gentrification, student loan debt, mass shootings, the light at the end of the tunnel leaves behind a beautiful struggle as the hook rings “To all my people working 9 to 5, trying to stay alive.” Those ideas of conquering social and economic anxiety through a black lens pops up on later tracks including “Heal and Chill” alongside “Fa You.”

When HARRIETTtackles romance, it’s handled with a free-flowing yet focused approach through the art of conversation on the Rippy Austin assisted “African Chop Shop.” The track is a better case for how well the two local heroes of L.A.’s alternative scene complement each other. “African Chop Shop” also features the most honest relationship test verses since “21 Questions.” The track is grounded in reality without the end goal being the standard rap sexual conquest. South London producer Jake Milliner provides a coffee lounge jazz filled with smooth bass lines and congo loops that sets the mood perfectly.

“2 Minutes” becomes a highlight in how grounded a lot of the subject matter is including rhymes about those final moments before showtime. Spitting rhymes about being a black artist and traveling the globe to a chopped up sample of Anita Baker’s “Angel” by Wayne Valentine should make the ancestors more than proud.

By the time HARRIETT closer “Sol Train” comes around, the duo go vintage 90s boom-bap as a last lyrical show-off. Ending the track with a clip from Stevie Wonder’s 1971 Soul Train “where all the brothers and sisters get together” performance feels like an adequate send-off for an album concerned with unity and liberation.

Regardless of how under-the-radar this album may become, sometimes the best way to freedom is through the underground.