Review: Molly Brazy Falls Short Of Her Potential On “Built To Last” 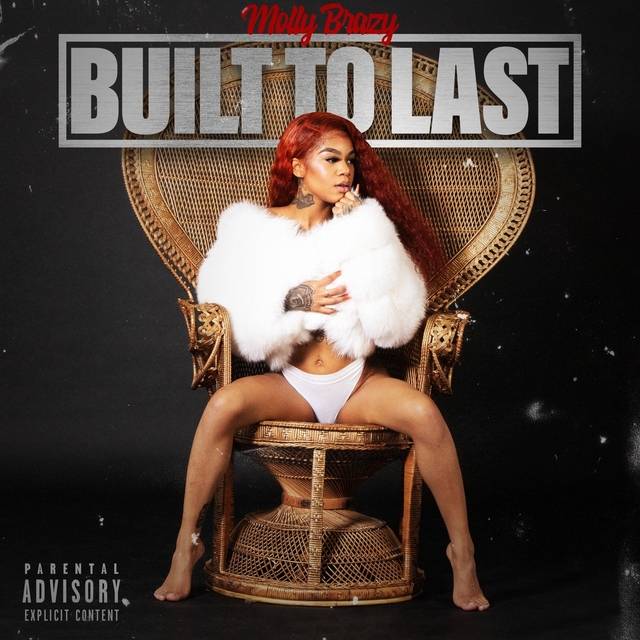 Grit and hunger have defined Detroit’s Hip Hop scene for years and Molly Brazy continues to keep up the tradition. The 20-year-old rose to prominence off of a few viral Instagram freestyles, parlaying the internet buzz into a blooming rap career. Co-signed by industry figures like fellow Detroit rapper Kash Doll and trap hitmaker Zaytoven, Brazy has been releasing music independently since 2017 with projects like Big Brazy and 2018’s Queen Pin. On these offerings, Brazy flashed potential, turning heads with her junkyard dog flow and undeniable swagger.

While some of those qualities remain, her latest release, Built To Last represents a half-step back.
The recent Atlanta transplant incorporates components of her new surroundings, snarling over trap beats, booming bass, and dark ambiance. The tracklist consists primarily of club bangers with an emphasis on stacking racks and being a bad bitch.

Tracks like “Count That” have Brazy on the mic with an aggressive flow reminiscent of Meek Mill, complementing the Dreamchasers-like production featuring quick keys and pumping kicks. “Everything Did” is a direct reference to Drake’s “Fancy” with Brazy taking on the role of the woman Drake was rapping about in 2010. Some of the best production on the record shines here with subtle sub-bass, up-tempo snares, and classic record skips.

Unfortunately for Brazy, the 2009-2013 trap rap and pop-rap influence many times sounds dated. Several tracks have Brazy doing her best to emulate Nicki Minaj’s early work, clashing with her strengths as an artist.
Her high-pitched inflection combined with unnecessary ad-libs on “Make It Rain” sounds like an ill-advised attempt of a Minaj-style track from the Roman Reloaded era.

Brazy’s hook game could also use quite a bit of work, one of the lowest points surfacing on “Keep Em Comin” with an ear-piercing inflection and flat delivery.

When Brazy attempts these pop-trap crossover fusions, it comes off forced and inauthentic. She’s much more in control when she drops off braggadocious bangers with street flair, taking command of the track. On a cut like “In N Out,” Brazy sounds at home spitting fiery, fast-paced lines about keeping her rivals at bay and hustling.

A moment of triumph comes to fruition on “Snaxk” propped up by sexually charged bars, booming bass-filled production and a subtle grit that brings the whole song together. Kash Doll adds to the highlight with a solid feature fitting the vibe perfectly. It’s the one time where Brazy is able to incorporate all the elements she’s tried to weave together throughout this release.

For the most part, this project works for what it is, a short offering of pre-game background hype tracks with some moxie. Still, Brazy’s shown she’s better than this and her talents get restricted by the box this project aims to stay in. Earlier in her career, she showcased introspection rapping about her tough upbringing in Detroit and her desire to stay real in a sea of fake.

However, on this release, she comes off as the very thing she once condemned.

It remains to be seen if this is just transitional growing pains or an introduction into Brazy’s new direction as an artist, but for now, her efforts to tweak her approach halts her progression.