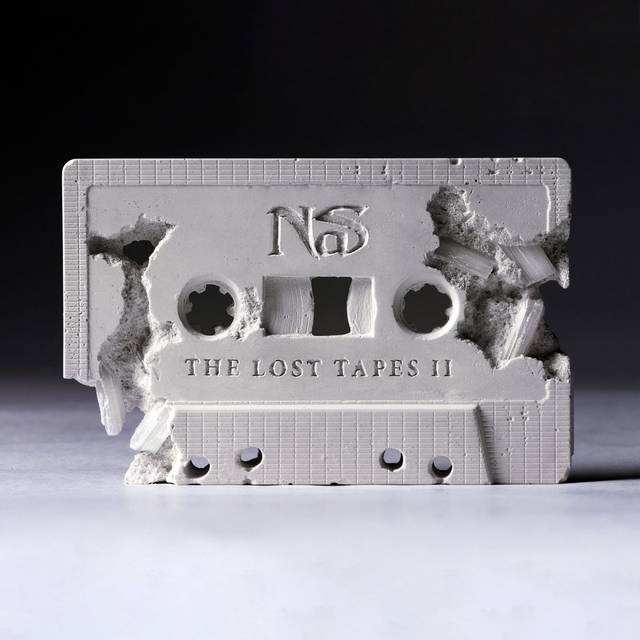 Nas and his fans have wanted The Lost Tapes 2 to be released for a long time.

Esco even wrote an angry letter to Def Jam nearly a decade ago about the record company allegedly delaying the compilation’s release. His ire seemed understandable at the time, given that The Lost Tapes was quintessential Nasir and remains a fan favorite. However, the follow-up is a disappointing array of free-association rhymes that pale in comparison to Nas’ album work.

Comparisons to the original The Lost Tapes are unrealistic and unfair — yet inevitable. The OG compilation consisted of leftovers from Nas’ most creative period of output: 1998-2001. And yet, the throwaway cuts from that joint ended up being better than much of i am… and Nastradamus. The beats alternated between elegant minimalism and roughneck grime, as Nas effortlessly shape-shifted from heartfelt to hard-edged and back again.

Listeners will find little of that charm on the sequel, which mines unreleased tracks from recording sessions for Hip Hop Is Dead, his untitled album, Life Is Good and NASIR. Nas wastes his nimble, multisyllabic flow by jumping from tired topic to exhausted topic. “It Never Ends” pays tribute to The Notorious B.I.G. on the hook, with a reference to Biggie’s song “Come On”: “I got seven MAC-11s, about eight .38s/Nine nines, 10 MAC-10s, the shit never ends (Never ends, never ends)/The world’s going crazy, this shit never ends (Never ends, never ends).”

Once upon a time, Nas would have had the foresight to turn this appropriated B.I.G. hook into a street-smart condemnation of the gun violence that has been a hot topic in America since Columbine. And yet, he wastes the cut rapping about wearing “buckets like Gilligan.”

Nas proved capable of focus and poise in the years these songs were crafted with tracks like “Accident Murderers” and “Cops Shot the Kid,” so the disconnect is puzzling. Regardless, Nas’ failure to live up to his talent marks The Lost Tapes 2 a frustrating affair.

The songs that permeate The Lost Tapes 2 aren’t earsores but are lesser variations of cuts he crafted during that time frame. He inspired his audience better on “We’re Not Alone” from the untitled LP more effectively than he aims to do on “Royalty” featuring RaVaughn. “Bye Baby” from Life Is Good‘s reserve is a much more satisfying commentary on Nas’ divorce from Kelis than “Beautiful Life,” also featuring RaVaughn. And, “A Queens Story” from Life Is Good is a wistful tribute to his hood that is far superior to “Vernon Family.” The Lost Tapes 2 also lacks the cohesion that made the first compilation so endearing. “Tanasia,” a shrug-inducing sex ode to a femme fatale, is placed back-to-back with “Royalty,” which preaches abstinence to women. Duality has always held intrigue in Hip Hop, but the fact that these two were placed together only adds to the sense of dissonance that plagues this project.

Nas has never completely missed the mark, and he doesn’t start here. The production ranges from adequate to outstanding. Aside from Nas’ unfortunate foray into a scat flow with “Jarreau of Rap (Skatt Attack),” Mr. Jones stays in the pocket with enticing piano loops and thick, NYC-favored drums. The solemn piano keys on “Queensbridge Politics” set the stage for a touching tribute to the late Prodigy. Likewise, Nas wins with nostalgia over an elegant backdrop on “Queens Wolf”: “At 14, tried out for the ball team/Junior high, they denied me, shot bricks that made the backboard scream,” he humbly spits. Cuts like these show the poetic jones that made him so endearing back when he had a New York state of mind.

Painfully, these gems are few and far between on The Lost Tapes 2. Nasir Jones mostly sounds uninspired and distracted throughout the 16 tracks, which begs the question: why even release these previously hidden records to begin with?

After last year’s underwhelming NASIR, the living legend needed to come back with a fire in his belly and hunger in his voice. Instead, we’re left with The Lost Tapes 2, which is a lesser rehashing of Nas’ latter years.