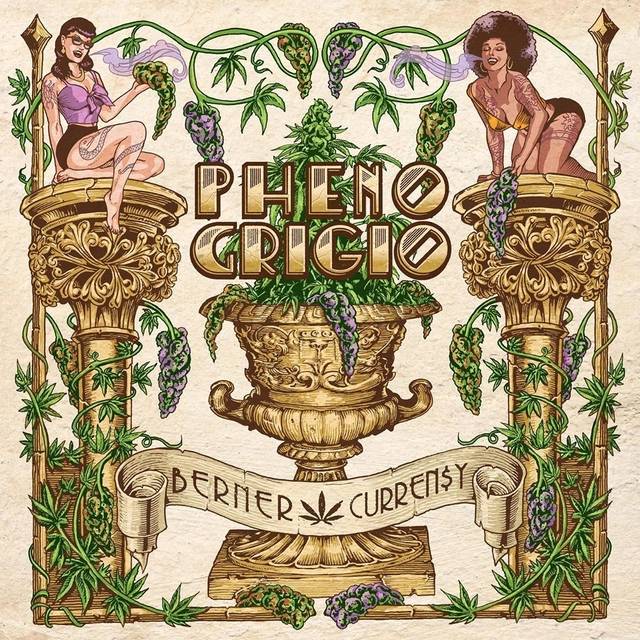 Fans have come to appreciate Berner for two things: his prolific and ever-updating album catalog, and his weed knowledge. But there’s something to be said for so-called “stoner rappers” to switch gears a little, especially since rapping about marijuana all the time can be a bit trite, at best. Berner, perhaps, is aware of this potential downfall, which is why he enlisted the mature sounds of NOLA native Curren$y to pack a one-two punch on Pheno Grigio, the latest entry into the Berner oeuvre that’s proving to be both consistent & finely done.

Curren$y and Berner are, from the start, equally yoked — the former aptly proved his ability to go up against fellow Kush kings when he traded bars with Wiz Khalifa on the long-awaited 2009 album; the latter, meanwhile, has released other collaborative albums (most notably, with Mozzy) to great acclaim. And, like the true entrepreneurs that they are, the album also comes with exclusive merch available through Berner’s Cookies ‘head shop.

But the joint project (ha!) comes equipped with other very special Hip Hop VIPs — B-Real of Cypress Hill (of course), Mozzy, Kokane, Richie Rich, and G-Perico all do their part to create a 12-track album filled with pure fire (albeit clocking in at just under 40 minutes, total, of music).

One of the most impressive Curren$y bars comes courtesy of “Mainey,” in which Berner & Richie Rich hold space while The Most Prolific snaps, “Coolin’ like a muthafucka, pressin my line/I’m a hustlin’ ass muthafucka, Ima get mine/Got bitches in my ride, diggin’ my designs/I put in hella time, got incredible shine/Pull up supa high in my blue ’65/Two feet on the ground with my head in the clouds/Couple pounds in the studio, we layin it down/Craftin the sound, harder than that shit out now/Sucka moves ain’t my style, I be on the move/Fuck what y’all got goin on, dude I’m way cool/Handling all these flavors, weed menu, like I got a mu’fuckin caterer/What you been doin?”

But don’t sleep on Berner, because he does that damn thing on “Gangsta Shit,” in which he takes us into a day in the life of a legal bud-preneur when he spits, “Baggin’, homie, P’d up, ship it/Berner a hard-head motherfucker, don’t listen (I don’t listen)/Yeah, we smoke different and my gold drippin’/You see the Old School driftin’ and the gold spinnin’ (Gold spinnin’)/They say, “Bern, you got a couple more bags of float?”/Hell nah, I need more cash to blow.”

The beats, too, are in excellent hands, and as usual, Berner opts for funkier, smoother sounds courtesy of the likes of Daz Dillinger (who is a goddamn legend behind the boards), Cozmo, and Traxx FDR.

As with most Berner-based efforts, the criticisms of the collection are very minor — ones that shouldn’t take much to correct, frankly. Aside from the aforementioned brevity of the album, Pheno Grigio sounds eerily similar to Berner’s 2013 effort, Drugstore Cowboy, which is a high times masterpiece. This isn’t to say that it’s a dot-matrix copy of the earlier work, but it is to say that there’s a fine line between remaining consistent and venturing into the formulaic territory. While Berner is by no means in the latter category, it wouldn’t hurt him to switch it up a little on the next turn (which, given his frequency of putting out albums, could be sometime next week).

Berner and Curren$y have both built up loyal and large fanbases thanks to their commitment to the game and their near-insane persistence. They absolutely deserve the respective fanbases that they’ve worked so tirelessly to earn, and it’s safe to say that Pheno Grigio will prove to be a treat for both sets of fans.