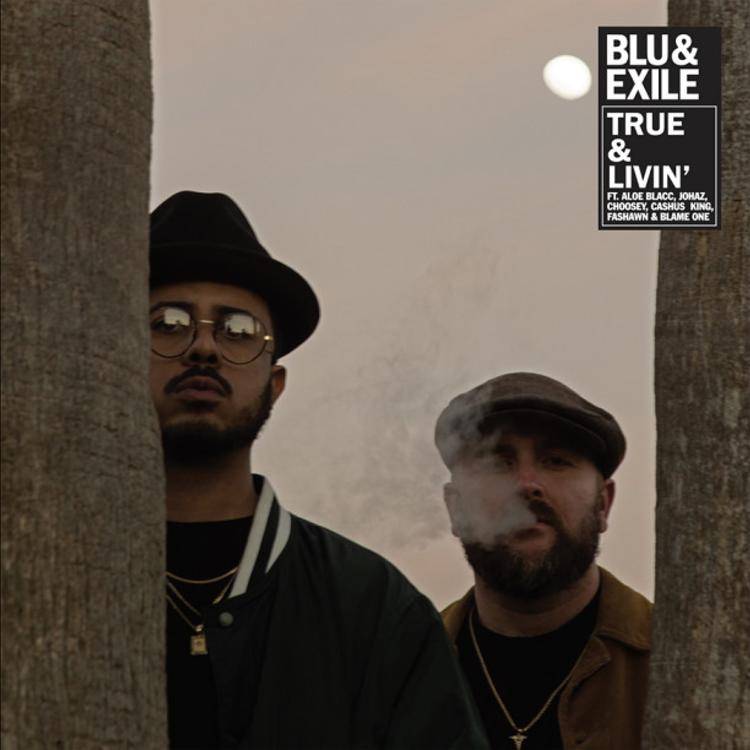 In the pantheon of Hip Hop duos, Blu & Exile stand amongst the greats with a catalog that manages to get better and better after each listen.

In a year that promises to serve (Hip Hop) Hip Hop heads treats like a Skyzoo/Pete Rock and De La Soul/DJ Premier collaborations, the Below The Heavens duo have given longtime fans a short and sweet new EP, True & Livin’, that proves two things: nothing has changed and we definitely need a full project.

#BluANDExile @bluherfavcolor This Ep is out now on all platforms. Link in bio -Features @fashawn @kingchoosey @dag_savage_ @aloeblacc @cashusking #blameone What could this mean? New EP? From Blu & Exile? Could it mean there’s more after this? Well put it this way we’ve been working hard. Oh ya and it’s my bday so for my bday present buy me this EP for you ! Stay tuned. Catch the tour dates below: ATL 5/28 @529_eav New Orleans 5/29 @thehowlinwolfnola Fort Worth Texas @shippingandreceivingbar 5/31 Albequerque NM @sisterbar 6/1 Denver 6/2 @theblackbox5280 LA @1720warehouse 6/6 NYC @knittingfactorybk 6/7 we are announcing the San Diego date this Monday ? @thedirtyscience @naymlis

Lead off with the title-track, accentuated with chopped up elements of The Impressions “Moonlight Shadows, Blu’s pen game remains sharp and digestibly complex. “Spread Sunshine” sparkles with its sonic jazzy minimalism, bridging to the project’s posse cut, “Power To The People” featuring Aloe Blacc, Blame One, Cashus King, Choosey, Fashawn, and Johaz.

It’s not as though these two have been at all quiet; Blu dropped two projects just last year, and earlier this year released a collaborative LP with Oh No, A Long Red Hot Los Angeles Summer. Exile released a Dag Savage EP (his duo with Johaz) just this past November — on which Blu provided a verse. Still, they’ve managed to remind us that In the Beginning: Before The Heavens is two years removed, and a new album is overdue.

The (very) quick top to bottom feels like a Costco sample of a product not yet available, or a BBQ with old friends where you need to dash before the burgers are done. Hopefully, this iceberg goes as deep as fans are hoping.