Review: Token Is Tediously Self-Aware On "Between Somewhere" Album 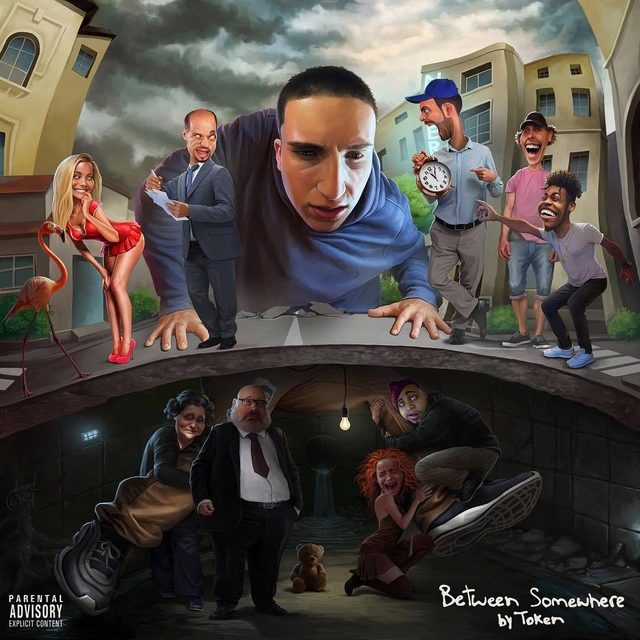 Rappers blowing up thanks to wildly controversial Instagram videos isn’t new but when was the last time a rapper blew up thanks to a viral rap contest submission video? It was likely Token and his 2015 entry for Kato on The Track’s “No Sucka MCs” contest. The young Massachusetts MC quickly scrapped together his 2016 debut project Eraser Shavings to capitalize on the buzz only to have it quickly fade from mainstream memory.

Sure, his viral moments have torched the interwebs for a short while but it wasn’t until he just dropped his second project Between Somewhere that his name once again resurfaced. This begs the question: can Token only successfully make viral “rappity rap” moments? A lot of signs on Between Somewhere point to yes.

It isn’t hard to hear Token’s fluency in super-duper rap writing. Like on “Treehouse” where he flexes lyrical acrobatics with lines like “Till not in my prime but I beat on my chest like a primate” and “Can’t sit calm like Seinfeld/That boy always moving.” He shows his dazzling ability to rap quickly and precisely but the inability to craft creative song structures is equally apparent.

The 17-track album kicks off with the intro track “Somewhere In Between,” a four-minute onslaught of self-empowerment coated with Eminem’s 8 Mile tactics; owning all his vulnerabilities before anyone can use them against him. He impressively articulates the entirety of his rap career with semi self-deprecating lines like “So no matter how many fuckin’ comments that I read/Tellin’ me how much that I’ve helped them to grow and follow their dreams/I’ma still feel like a coward, the hero just ain’t me.”

Such honesty proves how self-aware he is but smacks listeners in the ears like a ton of indigestible bricks. He doesn’t weave it through metaphors or slick wordplay; he simply shouts it over the middling beat. Take “Rich For You” and “No Service” – both tracks are prime examples of strong storytelling and good rapping “on paper” but once his voice meets the beat the execution feels forced. “And You” breaks the mediocre mold with a pulsating beat courtesy of Nox Beatz (who curates the majority of the beats on the album) and two ferocious verses provided by Bas and IDK. His passionately exasperating raps shine through brightest on adrenaline booster like these though he struggles to find synergy between his lyrics, the beats he’s rapping over and the appropriate tone to that glues them together.

Once the final track wraps, the biggest takeaway is that Token spent a lot of this album pouring his heart out into different buckets of his life. He is undeniably transparent in his narratives of self-doubt, backhanded success, family struggles and of course his inevitable rap prowess. All to the point where listeners will feel like his personal therapist listening to all of his micro and macro reactions to rap life’s qualms. Even his tangled relationship with God and religion pops up on “7th Day.”

This excessive life detailing gets exhausting throughout and the bulk of the album feels like a forced play-date with that classmate you already knew too much about. To his credit, it is literally impossible not to know Token as a man, rapper and overall human after listening to Between Somewhere.