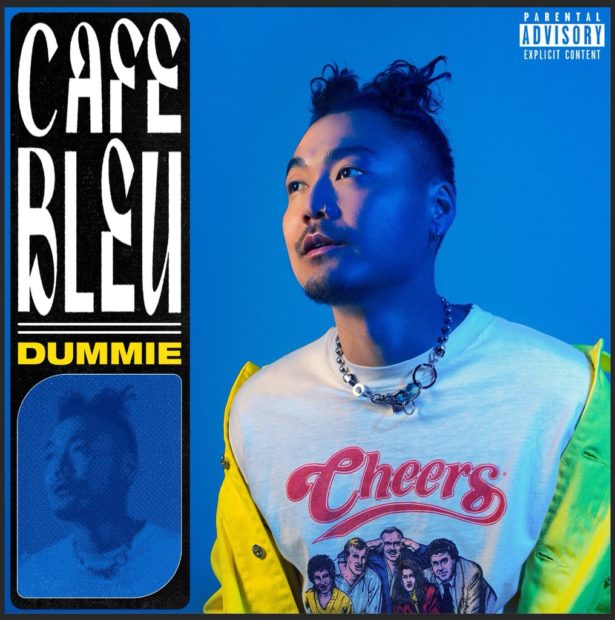 Dummie, formerly known as Dumbfoundead, first saw success as a battle rapper, but over the past few years has successfully transitioned artistically to become one of the most notable Asian-American MC’s in the U.S. (Actually, double kudos for the respectable battle rap shift.)

After a recent appearance in Eminem and Joseph Kahn’s new critically acclaimed film Bodied Dummie looks to close the year out strong by dropping off a smooth six-track EP titled Café Bleu.

Café Bleu is a sharp turn stylistically from the more braggadocious, trap-influenced records featured on his last effort Rocket Man. Dummie kicks off the project with a warm ballad called “Café Bleu THEME,” inspired by the Korean Lounge & Restaurant found in Los Angeles. On this record he melodically paints a picture describing the neighborhood bar as a mental safe haven of sorts, effectively creating the ambiance for the rest of the EP. These six records are surely the most experimental we’ve heard from Dummie up to this point, really showcasing his growth not only sonically but also in his lyrical content.

This is exemplified on a joint like “Washed,” an ode to the feelings harbored when one officially starts to age past their “youthful years.” Over some blissful instrumentation, Dummie raps, “Went from young and the dangerous/To making all of my payments/When I get wasted as shit/It take two days to get fixed/They ask me what’s your skin regiment/Bitch I drank like a fish.” Anyone who is familiar with Dummie’s discography is already aware of his skillset strictly as an rapper, so it was compelling to hear him on these six songs where there was clearly a greater emphasis placed on making melody-based music.

“CHILL FOO,” a heavily rock influenced ditty, serves as a much different vibe from the other five joints presented. On a full-length project genre and style experimentation can be properly sequenced for cohesion. On an EP with a limited amount of songs, there is not very much room for error in that regard. So when we get to the final record “PINK BLEU DAWN” (a great closer by the way), it sums up the conclusion of a long journey. This highlights what throws off the EP a bit which is that it feels like it could have been a strong album rather than an EP with the addition of just a few records. In the end, you feel impressed by the songs and musicality of them individually, but a tad unsatisfied in totality. You are left wanting more, which also can be interpreted as a good thing for an artist looking for more traction.

Overall, Café Bleu is a pleasant 20-minute listen that quickly flies by. Despite the hindering brevity, Dummie through his versatility made it clear on this one that he has much more to offer as an artist than what we’ve been hearing from him.