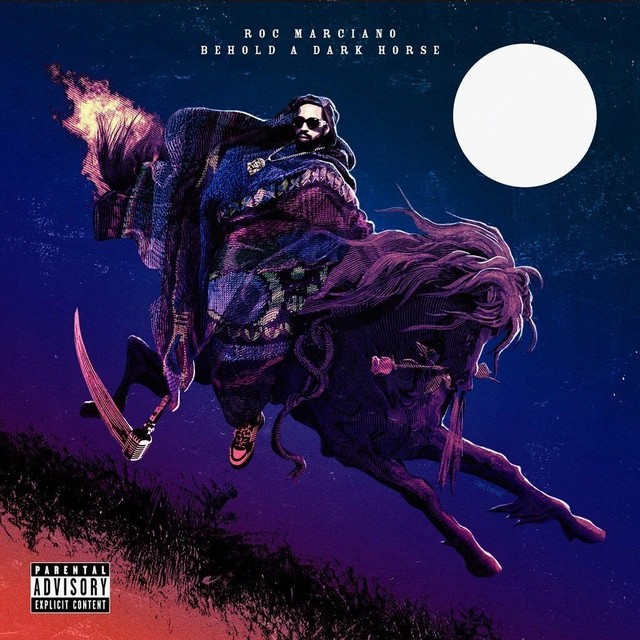 Roc Marci packs heat on his holster and pen for the polar ice cold world he comfortably dwells in. If he wasn’t a rapper, Roc could very well maintain employment as a Quentin Tarantino creative consultant. Just like the legendary movie director once claimed that extreme violence is a necessary tool to control an audience, Roc Marci is a street noir authoritarian offering listeners the best seat in the house for his tales from the darkside.

Throughout the 12 tracks on Behold A Dark Horse, the gritty MC’s second album of 2018, Roc Marci continues his quest to remain New York underground rap’s most beloved assassin. He melds Mafioso grit inspired by calculated and short-fused fictional gangsters from Hollywood films with absurdist comedy and romance.

Most of the album’s tempo is downbeat with minimal layers of samples, but Roc stays in his pocket with production from himself, Animoss, Doncee, Preservation, Alchemist, and Q-Tip. The album is a continuation of soulful yet moody beats that echo denouement scenes from Chow-Yun Fat’s action films.

“Hit you in the neck and then left the gun in the restaurant,” Roc raps during “The Horse’s Mouth” opener, harking the famous Godfather scene Michael Corleone’s imminent rise to power to tie in with Preservation’s haunting orchestral strings loop. The iconic film has been referenced over a million times many a rapper, but Roc’s intricate attention to detail makes it feel obscure.

The second track “Congo” has Roc lacing low octave piano key bangs with a rumbling congo pattern that resembles a shootout scene from Scarface. Roc puts all his guns on the table and quotes Hip Hop’s most beloved drug kingpin Tony Montana, and declares that he creates his own luck in the process. “Cherry drop-top Lotus/I bury these cockroaches/Leave your ras clot top open/I had to lift the Glock with potholders and put it where your pie hole is/I’ve been told where the pot of gold is/No shit, it’s not where the rainbow ends.”

The album has multiple guest features from Roc Marci longtime ace Knowledge The Pirate, Black Thought and Busta Rhymes — the man who put Roc on during his Flipmode days. The best verse among the guests expectedly comes from Black Thought. “Keep a wide receiver open like convenience stores/Am I Henry Ford or the lord? I’m either or,” Thought bodies on “Diamond Cutters.” Busta Rhymes gives a stellar verse and Roc intensifies his vocal tone on “Trojan Horse,” but the track seems somewhat of a forced attempt fallen short for a reprisal of 2000’s “The Heist” rap noir, a fan favorite of Busta’s with Roc’s standout rookie verse.

It’s as if Roc thrives on working in dim lit hazy red darkrooms to create his picturesque bars. “You bled three different shades of red is what the painters said/read the disclaimer before you skate ahead/rub your name out with the eraser head/No traces of you dead/Just a jpeg that they could place on the web,” he dares over a dusty vinyl sample of Q-Tip’s beat on “Consigliere.”

Alchemist’s production on “Fabio” elicits a calming effect that elevates Roc Marci’s laconic vocal delivery and vivid storytelling ability. But Marciano’s off-key singing on the latter track imitating the melody Chaka Khan’s eighties staple “Ain’t Nobody” seems misplaced in his attempt to add another dimension to the track. He continues eyebrow-raising serenades on “Sampson & Delilah,” but it makes sense for “Secrets” which interpolates Quincy Jones’ 1990 R&B hit “Secret Garden.” Roc Marciano puts his gangsta aside to kick game to a female and offer her a new lease on life. “Life kinda like too normal for you/Soccer mom truck, Shopko dog food/You’d rather twirl spliffs and whip a sports coupe,” he spits.

When rap fans over age 30 think of Long Island’s legacy in rap, these names generally come to mind: Public Enemy, De La Soul, Prince Paul, Busta Rhymes, Keith Murray, EPMD, and MF DOOM. Roc Marciano has steadily etched his own corner on this list. However, on BAHD, he momentarily strays from his ominous theme and lightens up to become a funnyman on occasion. “I’ll sit down and eat at P.F. Changs then leave without paying.”

Laugh now, cry later if you dare become one of his haters.