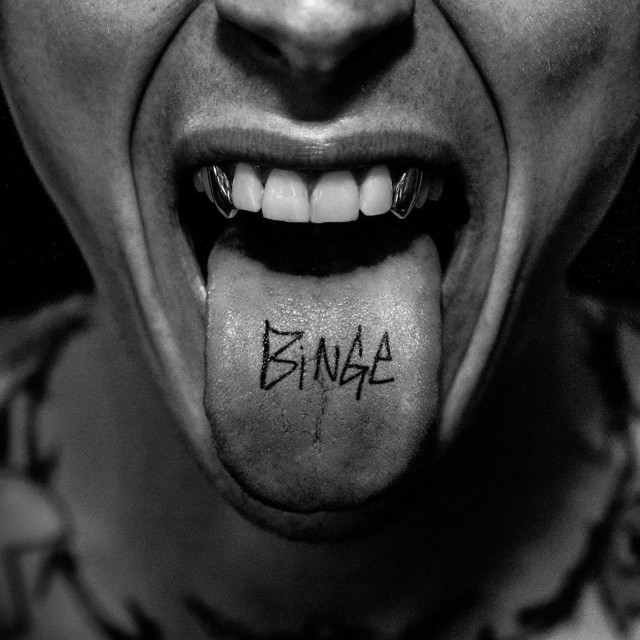 It’s truly amazing that after turning Cleveland blue-collar beginnings into global recognition, selling 20 million records and building a sizable career in Hollywood, as it stands, Machine Gun Kelly’s biggest claim to fame is beefing with Eminem.

Following the surprise swipe within the bigger surprise that was Eminem’s Kamikaze album drop, Machine Gun Kelly aptly defended himself with a formidable diss record in “Rap Devil” that pointed out plenty of valid Slim Shady fallacies. In response, Eminem’s “Killshot” rebuttal broke a YouTube record. So, at the very least, MGK can walk away from his latest rap rift knowing he made history.

With plenty of time left before he’s as “washed” as he says his elder competition is, MGK wisely seized the moment and released his BINGE EP with the “Rap Devil” slander neatly tucked in tow. Despite the well-timed project arriving over a year from his last album (his current magnum opus, bloom), there’s little evidence that suggests this extended player wasn’t compiled of songs that were laying around when it came time to package up “Rap Devil.”

MGK’s biggest hindrance as an artist has always been championing his own sound. As an incredibly versatile MC, he’s able always to adopt the current trendy flow of the moment and bar out with the best of them without getting proper credit. He’s never been shy about being white and rockin’ out, albeit never becoming a face for the movement. And his BINGE has admirable traits; most notably, the abandoned recklessness that day one fans have come to demand on the energy side. Stilted ragers in “LIVEFASTDIEYOUNG” and “GTS (Going Through Shit)” could be perceived as extremely negligent anthems in the wake of Mac Miller’s death but they also reflect MGK’s wildness to a tee.

Things are ironed out within BINGE‘s midsection on “LATELY,” the EP’s second-best record. Across a melodic accompaniment delivered by Ronny J and others, Kellz traces his broken home roots and tackles depression through a fairly catchy flow — not an easy feat.

The rest of BINGE impacts and fizzles just as fast as opens up — just like a fart. There’s the noisy “LOCO,” which merely serves as festival performance fodder with its mechanical 808s and catcalling chorus. And the 24hrs-assisted “SIGNS” covers nearly every 2018 rap song blueprint thanks to an Auto-Tuned hook, trap backwash beat, delayed delivery and stream of consciousness nonsense like “bad bitch, shotgun, toes up” to round out the dud.

It should go without saying that it’s easier to hone in on one particular target for a diss record compared to diversifying topics for a full-length project — and making them equally as enjoyable. And given the raw talent that’s always on display, should MGK one day unlock the secrets to making classic music, let’s just say the rap devil won’t have to settle for purgatory props any longer.