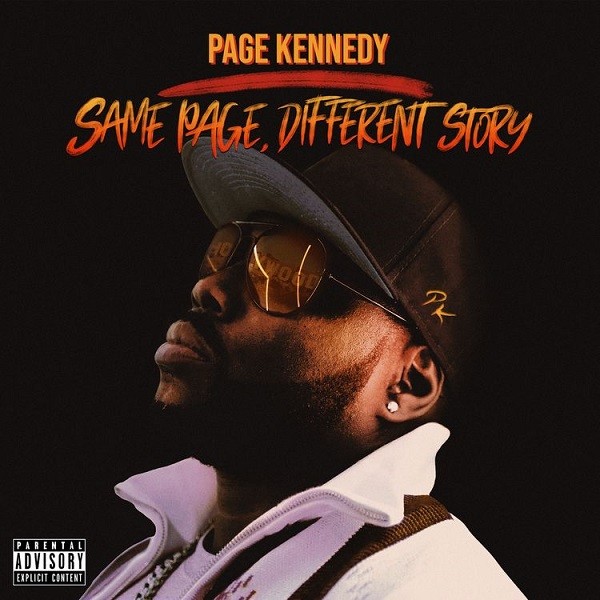 Page Kennedy took the phrase “never give up on your dreams” and ran with it like Shaolin Fantastic with the “Far, Far Away” record. The character actor of Weeds fame can rap, too, and at the ripe old age of 41 he put out his sophomore album, Same Page, Different Story. The album is proof that age ain’t nothin’ but a number.

Page is having the time of his life, no Dirty Dancing. His pain, passion, and hunger flood the project, and are apparent products of having waited so long to achieve his dream. He’s entertaining as hell when he yells “Bitch!” like Too $hort, simply because he “always wanted to say that.” On the same track, the opening “Same Page,” he declares that this album is “the story of Page Kennedy.” The rest of the project follows suit with songs that detail his upbringing, relationship issues, views on the world and career experiences.

His journal entries range from silly to eye-popping, the latter being the case on “Hi Gene/A Dad’s Tale.” Over simple drums and distant cries, Kennedy vividly details the brutal beatings he took from his father before thanking him for being there. Then, the drums speed up and cries draw nearer as Page urgently raps about the drama surrounding his own fatherhood. He couples vulnerability with resolve to paint the picture of a pained-yet-strong man. This picture fleshes out Same Page, Different Story as testament to unflinching human emotion.

Kennedy wisely follows up most of the heavy tracks with lighthearted skits from his friends in acting. Their hilarious digs at his celebrity status stay fresh on repeat and keep this album grounded. This, in turn, allows him to boast about his acting career without sounding pretentious. “The Audition II” is equal parts chest-thumping and self-deprecating. “And John told me that I killed it but I just gotta trust the process/But I been simmerin’ down,” he spits as a witty nod to Philadelphia 76ers star Ben Simmons. There have been plenty of rapper-actors, but few have rapped about their thespianism in such an engaging manner.

What’s not so engaging is Kennedy’s penchant for sexual raps. He lacks the conviction to keep lines like “after I taste it, I baste it” on “Cotton Candy” from being cringe-worthy. Similarly, “Ima Cheat” sounds tongue-in-cheek, but Page is no singer and his melodic phrasing of such a risqué topic may have listeners reaching for the skip button. The sonics of these songs are strong, though, much like the rest of the album. A Detroit native, Page enlists hard-bodied bass and colorful piano keys to back his aspirational rhymes. A highlight is “One in a Million,” which drips with chipmunk soul as guest Elzhi raps, “It’s a dog-eat-dog that’s why the rats get swallowed by cobras/The cobras get stepped on by gorillas, the gorillas get caged, this the realest shit I ever wrote.”

As a stellar lyricist in his own right, Kennedy knows he’s underrated, overlooked but hones in on a balance that makes Same Page, Different Story entertaining, uncompromising, and down to earth. A rarity as far as 2018 Hip Hop is concerned.