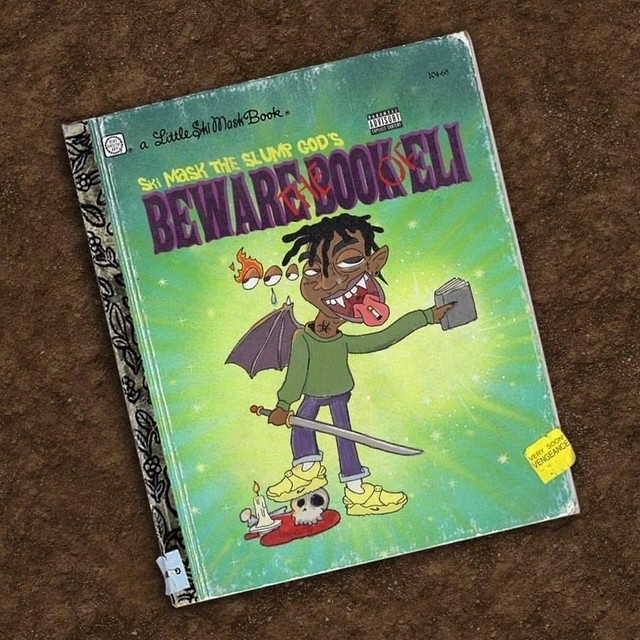 Just about everything regarding Ski Mask The Slump God’s new albumixtape Beware The Book of Eli feels abnormal, including the elements outside of the actual music. How you view the project may ultimately come down to which version you’ve heard; the official project released through Republic Records, or the leaked edition posted by Ski himself 10 days prior. The differences aren’t extreme, but they’re certainly present — most notably in the three missing songs from the official release, “SKIMeetsWorld,” “Worldwide,” and the Offset-assisted “With Vengeance.”

Still, there’s plenty to be excited about on the final version of Beware The Book of Eli, thanks in large part to its unrelenting eccentricity. Twisted, out-of-tune melodies are still catchy on “Throwaway,” thanks to his humorous cadence that swaps precision for personality. The first verse of “DoIHaveTheSause” is one of the most impressive tongue-twisters of 2018, toying at conventional rhythms with reckless abandon. Lyrically, he brings just enough wordplay to substantiate his off-kilter flow: “These niggas be for the cap, like knees / Fuck it I’ma be the knees, of bumblebees / Your mother is teaching me the birds and the bees.”

Plenty of references to pop culture appear in Ski’s otherworldly stratosphere, the first of which comes in the title. Ski pulls from the 2010 Denzel Washington movie The Book of Eli and parallels the post-apocalyptic world of the film with swarming ad-libs that build a haunting sense of dystopia. That dystopia comes to a head on “COOLEST MONKEY IN THE JUNGLE,” which serves as Ski’s response to H&M’s controversial sweatshirt fiasco. Over eerie, distorted production courtesy of Murda Beatz, Ski attempts to reclaim the slur with pride, boasting on the chorus “I’m the coolest money in the jungle / Sauce that you had you been fumbled / And tell the white supremacist to lick my big toe.”

“LOST SOULS” provides perhaps the most direct reference to the underworld, as Ski threatens to drag his enemies to the depths of this bizarre journey through the underworld. When he ratchets up the intensity on “CHILD’S PLAY,” it’s a thumping circus of oddball energy that bounces off the booth walls akin to a demon. Ski again delivers a creative barrage of sounds and syllables, although Rich the Kid’s guest verse falls somewhat flat in the wake of it. The two combine again on the wacky outro “BUKKAKE,” which lacks the focused punch of the prior collaboration, instead opting to flail with overblown bass and synthesizers, making for one of the project’s apparent misses.

The LP’s compactness works as plus side — no track clocks in above three minutes, while the entire mixtape runs its course in a brisk 21 minutes — before its unpredictability loses its luster at the tail end. Fans will undoubtedly be left wanting more, but such a calculation allows Ski more room to rise and develop into his career, as he outgrows the antics that got him here.