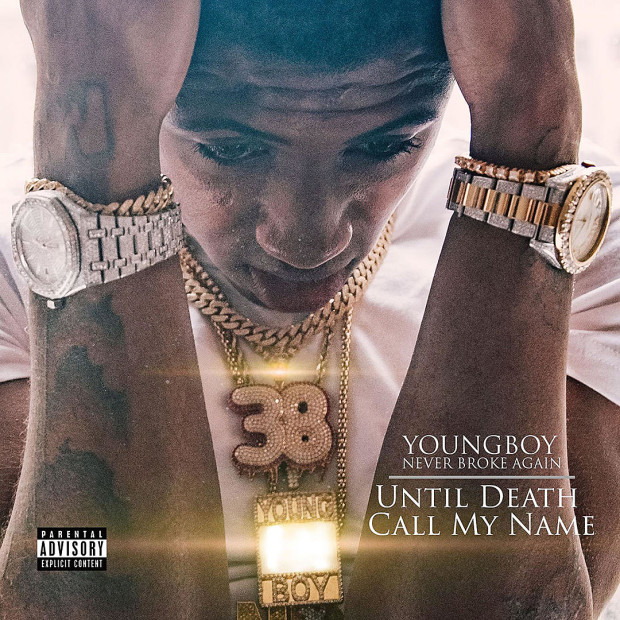 YoungBoy Never Broke Again’s Until Death Call My Name didn’t arrive with the type of push that’s typically associated with a major label debut album. Instead, Atlantic Records quietly dropped the LP after some delays due to the Baton Rouge native’s indictment on charges of aggravated assault and kidnapping.

The LP’s release being thrown into disarray by an arrest was fitting. The 18-year-old rapper’s career has been mired in legal woes.

Throughout Until Death Call My Name, YoungBoy is keenly aware of his troubled circumstances. Unlike many of his teen rap peers, YoungBoy is consumed with reality instead of trying to escape it. Pain is a central theme of the album.

On “Preach,” YoungBoy openly admits to crying while he was behind bars and seeks forgiveness from his mother over the keys of DJ Swift. Although he can’t seem to detach himself from the behavior that landed him in prison, there’s contrition within him. “Gotta pray before I sleep, the devil talk to me/ Gotta get ’em out my dreams ‘fore he take over me,” he raps on “Traumatized” before jumping into a tale of regret on “Worth It.”

The hard-living youngster’s speedy entry into parenthood — spurred on by fathering multiple children before even being able to legally drink alcohol — is one reason for his search for atonement. He references his kids multiple times on the album, often imagining a world where they’re left alone because he’s either dead or in jail. It’s a grim but real possibility when he shares his willingness for violence, not to mention his looming domestic abuse case.

The melodic abilities of YoungBoy serve him well in creating catchy cuts, each tailor-made for today’s rap landscape. The hook on “We Poppin” is particularly infectious and meshes seamlessly with Drumma Boy’s bouncy production. It has all the makings of a summer hit save for the albatross that is Birdman’s guest appearance.

The LP’s other major collaboration, “Right Or Wrong,” is also a misfire. Future’s verse is completely disconnected from the actual subject matter of the song and the sparse production from Big Korey and DJ Montay are equally out of place.

While YoungBoy does well with the “sing-song” style, his most impressive performances come when he ramps up the ferocity and spits straight bars. “Overdose” works perfectly as an opening salvo, displaying his command and presence on a Bighead instrumental that pummels listeners over the head with thunderous bass. “Diamond Teeth Samurai” is the album’s crown jewel though, implementing Lil Wayne’s classic “Tha Block Is Hot” hook for an updated rendition.

The Weezy parallel is hard to ignore; he was also a teen rap sensation from South Louisiana when he made the song almost 20 years ago. But what makes “Diamond Teeth Samurai” work beyond nostalgia and its connective tissue is YoungBoy’s wordplay.

“Whole lotta killing, Helter Skelter like I’m Charles Manson/ These niggas hating, I keep that hammer, all these diamonds dancing/ Me and Meek Mill watchin’ movies in Rick Ross’ mansion/ You disrespect, I up the TEC and let you niggas have it/ 23 shots, Lebron James, I shoot the Cavalier/ These niggas speaking on my name, I’ma get it clear,” he raps on the first verse.

Until Death Call My Name, much like its creator, has its issues but beams with promise. YoungBoy is extremely polished for his age, which would normally bode well for a burgeoning artist.

Instead, his inability to stay out of trouble casts doubt on his future in Hip Hop.