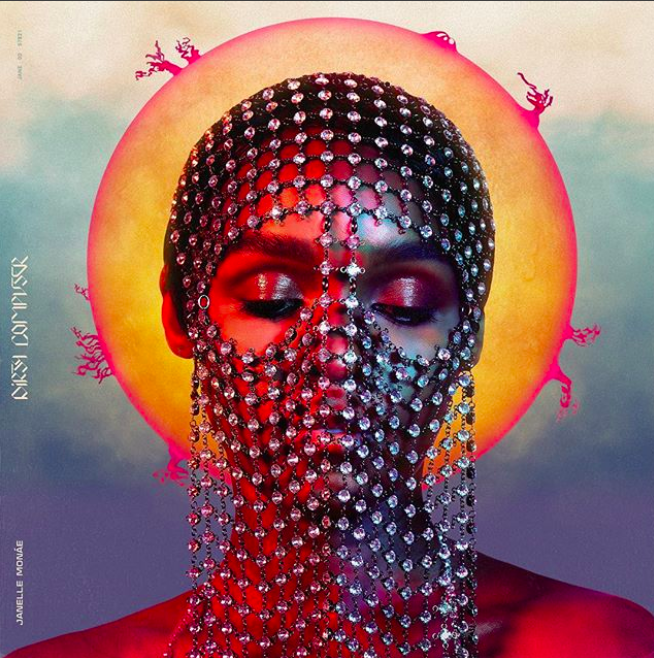 The undeniably talented Janelle Monáe revealed she identified as pansexual during an interview with Rolling Stone last month, explaining, “Being a queer black woman in America — someone who has been in relationships with both men and women — I consider myself to be a free-ass motherfucker.”

On Dirty Computer — which came with a 48-minute “emotion picture” — the 32-year-old actress/artist bathes her sexual liberation in ’80s-tinged pop, funk, soul and sultry R&B.

Monáe, who cites The Beach Boys as a major influence, enlisted de facto leader Brian Wilson for the brief intro title track, indie princess Grimes for the Power of P anthem “PYNK” and Pharrell for “I Got The Juice.”

From start to finish, the 14-track album oozes with sexuality and finds Monáe braver than ever — but almost to a fault. While it’s likely empowering for Monáe to finally free herself from the restraints of societal labels, the lyrics to her sexual revolution often ride a thin line between flat-out corny and barely tolerable, especially on “Screwed” featuring Zoë Kravitz.

Sonically speaking, the track is one of the strongest on the project but coupled with the “Let’s get screwed/I don’t care” hook, it comes off as comedic rather than the grandiose statement about sexual freedom it’s seemingly intended to be.

Toward the end of the song, Monáe again shows off her rapping prowess, much like she did on the latter half of the pop-drenched “Crazy, Classic, Life.” This is really where she shines. For “Django Jane,” she flexes in the manner of a true MC and spits braggadocious bars about getting out of her hometown, her ascent to the top and all the accolades she expects to collect in the future.

“Black girl magic/Y’all can’t stand it/Y’all can’t ban it/Made out like a bandit/They been trying hard just to make us all vanish/I suggest they put a flag on a whole ‘nother planet,” she raps.

While making Dirty Computer, Monáe says she consulted Prince — who she called a mentor — before his untimely passing in 2016 and his essence can be felt throughout the album. She previously collaborated with the late icon on her track “Givin’ ‘Em What They Love” from 2013’s The Electric Lady, and it’s clear the Purple One had a monumental impact on her. But there’s a difference between being inspired by an artist and mimicking their sound completely.

On “Make Me Feel,” Monáe swaps “pynk” for purple, and practically recreates Prince’s 1986 classic “Kiss.” To her credit, Monáe is well aware Prince’s shoes are impossible to fill, which she discussed in a recent interview with Beats 1 Radio.

“There’s only one Prince and there will never be another,” Monáe explained. “I had the opportunity to be inspired by Prince like the rest of the world growing up. In fact, I used to be terrified of Prince. I could not watch his videos. I had a dream that he chased me in a purple suit.”

Although it’s refreshing to hear a woman — a black queer woman at that — command her sexuality the way Monáe does here, when she opens up about her insecurities on “I Like That” and “Don’t Judge Me,” we finally get a glimpse into what makes Monáe human rather than the android Cindi Mayweather she introduced to the world on The Electric Lady, or the fearless actress we see in films like Hidden Figures or Moonlight.

Yes, Dirty Computer falters along the way with a few weak hooks and some questionable lyrics but at least she was able to wipe out the old Monáe and reboot who she’s truly meant to be — both artistically and personally.