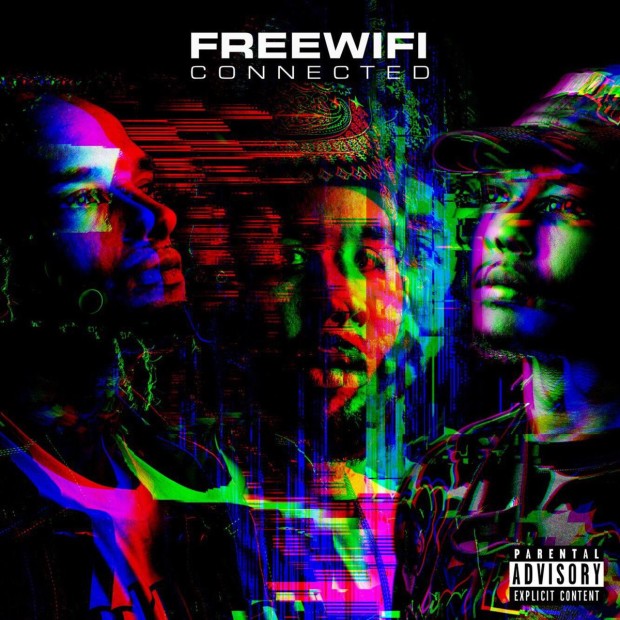 Rostrum Records has an impressive reputation for brandishing carefree tunes through artists like ex-flagbearers Wiz Khalifa, Mac Miller and current astro-rhymer, Mod Sun. FREEWIFI, a trio of fun-loving rappers from Minneapolis, Minnesota, dials into Rostrum’s airy attitudes with the fun yet redundant Connected.

FREEWIFI’s debut is mostly devoid of depth and insight. In its place are weight-room flexing and frat-house frolicking from three young rappers who probably saw Dead Poets Society at a young age and decided to make “carpe diem” their mantra. Connected’s airy attitudes, so prevalent in Hip Hop, are digestible and even enjoyable because they’re conveyed with tight flows, which in turn are bathed in appealing production.

Group members J. Plaza, Tha Rift and Daddy Dinero actually employ simplistic rhymes as a strength. The opening “M.A.D.E.” features an elementary chant with “I got it made, I got it made, I’m getting paid,” which won’t be heavily deciphered on Genius but is endearing in its catchiness. Bolstered by rolling drums and an upbeat bassline, the track allows these three young rappers to endlessly entertain with their elation. No song embodies FREEWIFI’s ability to mine power from basic bars than “Ego,” the single that caught the attention of Rostrum. Rhymes like ‘Think y’all can do it like me/Nigga that’s unlikely/Is you rollin’?/Bitch I might be/I’m so motherfuckin’ icy,” are as well-worn as Joe Mauer’s athletic cup, but J. Plaza’s crisp flow and assertive delivery keep the listener engaged. It’s this ability that elevates the LP above stagnancy and champions replay value.

FREEWIFI is clearly a talented collective. However, the group’s debut would have benefitted from much more thematic diversity. As impressive as the packaging is, the fact remains that when the music is unwrapped, there’s not much new to see. This results in the lyrical content growing weary two-thirds through the 12-track album, with the beats generally offering variation to the melee. Angelo Bombay puts some spice in “Salsa” by sprinkling thick drums with softer sonics and an ominous bassline. By contrast, “Fuck It” features a beat that sounds as cringe-worthy as the dial-up sounds before free WiFi was common in coffee shops. Whether production is ear candy or jarring, Connected sorely lacks in impact and variation.

Back-to-back offerings “Feeling U” and “Recruit” are the album’s shining moments and do highlight the Minnesotans are certainly capable of depth in their music. FREEWIFI’s lyricism is no stronger on these joints than on other songs, but the trio’s musings about relationships prove they can convey insight in a relatable way. The cuts also bely that FREEWIFI has barely scratched the surface of its potential. For now, Connected stands as a solid introduction and suitable party playlist.