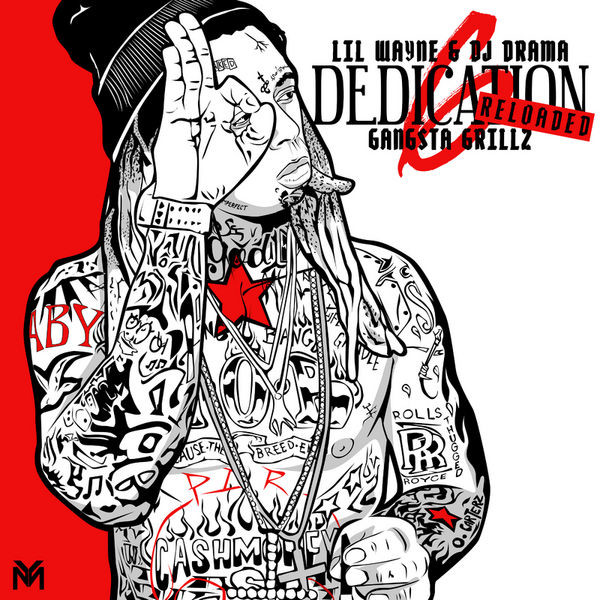 If anyone still had doubts over Lil Wayne’s rejuvenated spirit after Dedication 6, the mixtape’s follow-up should silence them. Dedication 6: Reloaded, which arrived just one month after its predecessor dropped, finds Weezy continuing his lyrical tear over an assortment of colorful beats both new and borrowed. Unlike the originator, however, Reloaded suffers from an exhausting run-time.

Most rappers wouldn’t dare hop on beats as distinguished as Kendrick Lamar’s “Loyalty” (produced by Sounwave, Terrace Martin and DJ Dahi) or JAY-Z’s “Family Feud” (produced by No I.D. and Jay). However, Lil Tunechi isn’t most rappers. As he has done with popular production so many times, Wayne hijacks those beats like Butch Cassidy and makes them his own. “Weezy N Madonna” finds Dr. Carter prescribing love to a nameless significant other, and his vocoder-tinged croak syncs well with the “Loyalty” beat’s distortion. He brings Drake along to muse over Cash Money drama on “Family Feud,” and Drizzy raps with a poise that suggests No I.D. had him in mind for a remix when he cooked up this joint. Wayne, meanwhile, fires shot after shot after father-figure-turned-rival Birdman. “If money grow on trees, I climb and rest in that bitch/Build a treehouse and knock the bird nest out that bitch.” Wayne’s sustained ability to give his own take on stalwart production not only shows he hasn’t lost a step, but also will keep listeners on their toes throughout Reloaded.

It’s clear that, after all of the turmoil and uncertainty surrounding the mythical Tha Carter V, Wayne is inspired to make music for his rabidly loyal supporters. He fills this mixtape to the brim with witty wordplay, zany quotables and the free-association rhyming Wayne fans fiend for. “For Nothing” finds Wayne seamlessly jumping from topic to topic while still retaining a thread of continuity. “I been called a stone, pocket full of stones/On the corner moving stones/Papa was a Rolling Stone, I’m so stoned,” he raps, and it sounds as if he’s simply letting his stream of consciousness fall out of his mouth and onto the beat. The voracious “Big Bad Wolf” features bars fit for replay on replay, as he spits, “Now the artificial becomes sacrificial/That’s a body count, where’s the mathematician.”

There are very few weak links on Reloaded — the obnoxious “Groupie Gang” and ill-suited “Gumbo” among them — but the project’s length is problematic. Certain songs, such as “Sick” and “Don’t Shoot Em” feature decent wordplay over adequate production, but should have been left off the project for a tighter focus. Wayne imbues each track with spoken-word tidbits and trivia, and on first listen these are funny and engaging. However, they lose some of their luster on repeated spins and drag out an already overlong 20-track project. Weezy stans will love as many songs as they can get their hands on, but the rest will be counting down the tracks about three-fourths of the way through.

Even as the mixtape wanes, Weezy’s drive is undeniable. He absolutely spazzes on “Freaky Side” with bars like, “Some people get in line/Some, try to skip the line/Me I’m in the lunch line/Starving like it’s dinner time/Before the begin of time/I been in a different time.” The cut, which is laced with inspiring piano keys, comes at Track No. 17 and is a reminder that no matter what Dwayne Carter faces, he’s not going to be kept off the mic. It’s this tireless spirit that elevates Dedication 6: Reloaded above its flaws and turns it into a commendable tape.