Review: Juicy J Back On His BS With “ShutDaFukUp” 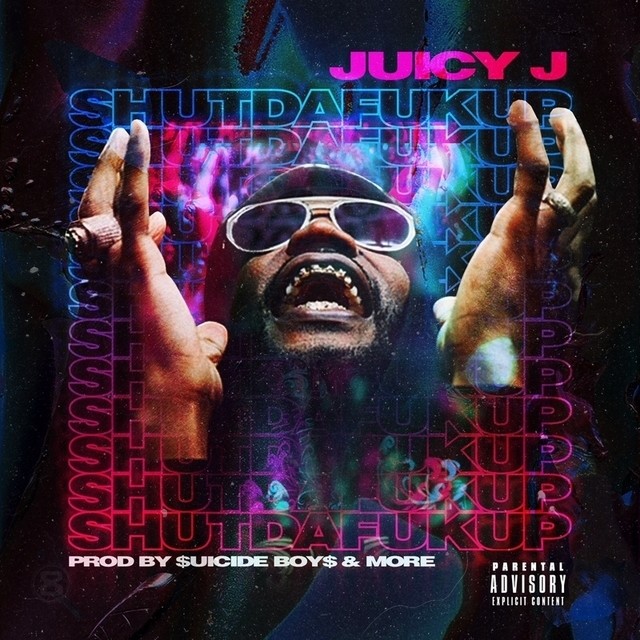 A month and a half after releasing his fourth studio effort, the semi-decent Rubba Band Business: The Album, Juicy J returns with the audacious mixtape ShutDaFukUp. Coming so quickly after an album release, there’s good to reason to be skeptical of the quality of this project. Thankfully, Juicy J sounds more focused on the freebie release; seemingly more than happy to flex his appetite for fresh sounds and ideas. Despite not having a standout hit, ShutDaFukUp stands as a testament to how even as the Oscar-winning Memphis legend reaches the end to his third decade in Hip Hop, he’s still willing to takes risks and surround himself with new talent.

Though usual suspects Mike Will Made It, Wiz Khalifa, and some guy named Project Pat all make appearances, the project’s distinct bravado stems from the New Orleans-based punk rap duo $uicideboy$’s moody production. Producing most of the mixtape’s tracks, the outfit’s dark beats provide an interesting contrast to Juicy J’s colorful personality. On the opening song, “Hot Line,” the beat gathers up texture, layers, and momentum at a slow and steady pace. At the halfway mark, Juicy J unleashes a strong, declarative verse right before the beat descends into a grimy outro. The track’s dynamic and yet effortless energy sets the tone for the entire mixtape.

Rarely exceeding three minutes on other highlights, “Funds Up” and “Working For It,” these songs demonstrate the Memphis rapper confidently maneuvering around the $uicideboy$’s abrupt beat switches and ominous flourishes. “Working For It” successfully weaves a distorted version of the violin instrumental from The Godfather theme song into a turn-up track. And on the intoxicating “Sauce Pie,” trap supplier-to-the-stars Murda Beatz breathes new life into Mike Jones’ 2005 hit “Still Tippin’” by heavily filtering and deconstructed the iconic hook, eventually slowing down and collapsing onto itself. Though “Sauce Piece” lacks Juicy J’s notorious club energy, it demonstrates an enthusiasm to venture off into the bizarre.

However, ShutDaFukUp’s guest appearances are more of a mixed bag. The song “Got Em Like”, featuring the late Lil Peep and Wiz Khalifa, simply lacks energy. Ben Billions’ woozy, generic production loses steam and doesn’t blend well with each rapper’s distinct vibes. “Kamasutra,” featuring the chart-topping Cardi B and production by Mike Will Made It, has the most obnoxious and jarring hook of the entire mixtape. Juicy J and Cardi B take turns commanding “You better fuck me all night” to one another in hopes of igniting some sexy swagger that never manifests itself. A song like this makes one question whether Cardi B is just Hip Hop’s Bitcoin — ubiquitous but ultimately overhyped. On the other hand, “Play Wit My Gun,” featuring Project Patta, succeeds at playing to both artists’ strengths. Juicy’s big bro confidently raps along to $uicideboy$’s gloomy keys and slow-tempo drum claps; the minimalism around him helps accentuate each one of his clever puns.

Going into the project, it’s obvious a tape named ShutDaFukUp isn’t bringing anything new to the table in terms of the songs’ lyrics and content. But this mixtape’s success stems from reinventing familiar tropes from Juicy J’s extensive catalog. Even at 21 tracks, it’s rarely boring or predictable. Whether his next release will be in two months or two years, ShutDaFukUp’s experimental spirit shows that decades into his career, Juicy J won’t be running out of interesting ideas anytime soon.