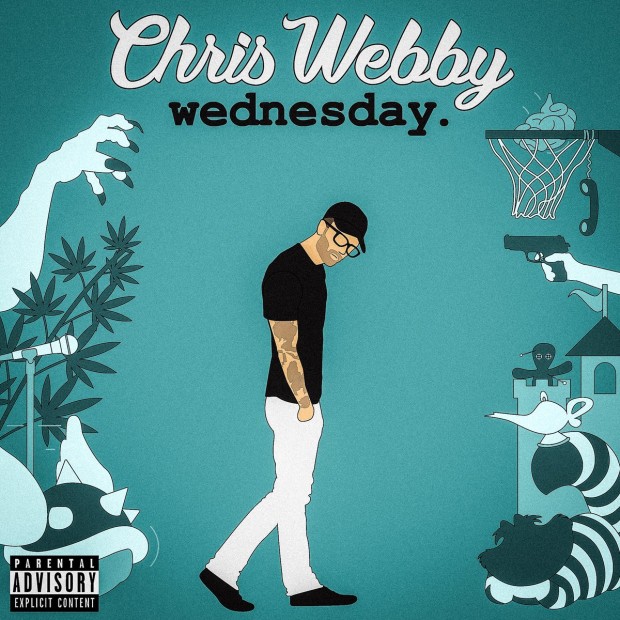 Back in March, after switching management, Connecticut rapper Chris Webby started releasing new music on a weekly basis as part of his “#WebbyWednesday” series. Capping out at one hour and twelve minutes, his second album Wednesday is a sprawling anthology of these tracks. Despite featuring an eclectic mix of dancehall and rock-rap, Wednesday is a testament to his self-indulgent worldview and fails to live up to his persistent claim that he’s more clever than his competition.

The album starts off with a bang with “Raw Thoughts” — a take no prisoners rant that goes after the political and cultural establishment. In five relentless minutes, Webby manages to criticize everyone from Mike Pence to Hillary Clinton to Kid Rock. Over a blaring, mid-tempo Jazzy beat, he goes full Slim Shady by going into gruesome details about sexual acts involving Ivanka Trump and Jeff Sessions.

Also on “Raw Thoughts,” Webby lampoons mumble rap with one of the most patronizing verses of the entire album: “And if they aren’t nervous then they don’t know what I’m sayin.’ Maybe they can’t understand it with that first-grade education/Maybe they too fucking high off cough suppressant medication/As they wearing skirts with a matchin’ purse while they puttin’ braids in.”

Webby claims that using multiple syllable words makes him better than his contemporaries. When actually, there are plenty of rappers out there who don’t need to dust off a thesaurus to be innovative or clever. In addition, mumble rap shouldn’t be simply written off just because a few performers abuse cough syrup. Ironically, within the same song, Webby discusses taking an “Addy.” So, taking suburban prescription pills is okay while drinking “cough suppressant medication” is for losers? Such attempts at being “raw” come off as self-righteous and shallow.

From that entry point, things just plummet further. Over the course of eighteen tracks, Webby manically raps over clunky beats that chase current trends. On “Dazed & Confused,” the production is scattered and draws from dubstep. While disjointed records “Call On Me,” “Check The Vibe” and “Twist Again (La La),” find Webby struggling to emulate a lighthearted dancehall vibe. The Connecticut rapper only seems to truly be in his element when he’s taking a more serious route on an underdog anthem such as “Rookie Of The Year.”

On “Middle Ground,” he opens up about his professional woes, detailing the unique perils of having some internet notoriety but lacking major label support. The chorus’s melody is harsh and not necessarily enjoyable. But this homage to Eminem’s “Rock Bottom” succeeds in contrasting the two rappers’ predicaments. Instead of rapping about his personal struggles like Eminem, Webby discusses what happens when you have fans and yet are filled with self-doubt. This track achieves a level of complexity and humility that’s absent from most of Wednesday.

The guest spots on this album are a mixed bag as Webby throws every one against his wall to who got the juice. “The Stickup,” featuring New Jersey singer-songwriter Skrizzly Adams, has some intoxicating production that collapses into an underwhelming hook and redundant themes of being one hit away. And while the posse track “Slow Down,” showcases strong verses from fellow Connecticut rappers Anoyd and Jitta On The Track and “University of Life,” (featuring singer Madi Wolf), come off as cheap alleyway knockoffs on Eminem’s blockbuster duets with Rihanna. Overall, tracks like these are aimless and muddled.

There’s definitely something admirable about an independent artist bypassing corporate A&R teams to deliver their true vision to fans. Wednesday is a success if you’re wholeheartedly invested in Webby’s career and think that he’s bringing something fresh to the table. But for the casual listener who isn’t super pessimistic about the current state of Hip Hop and doesn’t necessarily buy into his self-aggrandizing claims, Wednesday is simply a headache.