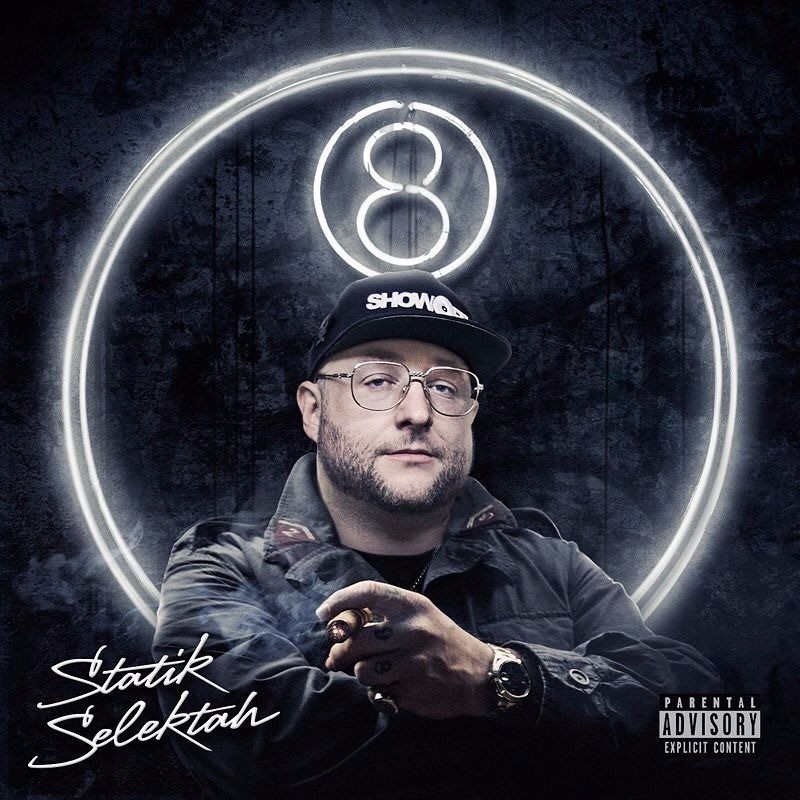 Seasoned producer Statik Selektah didn’t dig too deep for the title of his new project. 8 is (yep, you guessed it!) his eighth proper studio album, marking the follow-up to another aptly titled album, 2015’s Lucky 7, which was intended to be his final compilation album. But as he says in album opener “Harley’s Blues” — named after his daughter — “They really thought that was the last album?” Of course not. The joke’s on us.

The Boston-bred, New York City-based DJ, beatsmith and radio personality has returned with a monster 18-track album stuffed to the gills with 36 features from Hip Hop’s upper echelon. The sheer number of MCs on this project is staggering, with up to six appearing on a single track. From underground stalwarts like Termanology and Royce Da 5’9 to commercial success stories like 2 Chainz and Wiz Khalifa, the diversity of rappers defines the album. But they all have a singular thing in common — they’re all about bars.

Simply put, this isn’t an album for the casual listener. It’s for fans who have the dedication to decipher each densely packed verse bar-by-bar. But that’s Statik’s tried-and-true formula, one he’s worked on perfecting over the years. As he tells HipHopDX, “It’s whoever I’m vibing with at the moment, but I definitely pick rappers who don’t suck [laughs].”

“Put Jewels On It” featuring Run The Jewels — a clear album highlight — finds a dizzying verse from Killer Mike toward the end. He’s spitting out his syllables so quickly that he’s practically scatting like it’s the 1920s all over again. Then, on “Ain’t A Damn Thing Changed” featuring G-Eazy and Joey Bada$$, which is easily the most commercially accessible song thanks to singer Enisa’s contagious, soulful hook, both MCs tell a vivid tale about their rise to notoriety.

Shady Records’ Westside Gunn and Conway join Termanology on “No. 8,” and continue the East Coast boom-bap vibe that dominates the album. The downside to that? The majority of the beats eventually start to bleed into one another and the hodgepodge of lyrical concepts only exacerbates the monotony. It seems that each individual track on the album functions better as a singular unit rather than as the sum of its parts.

Just when you’re about to zone out completely on the lengthy “What Can We Do (Parts 1 & 2),” standout track “Don’t Run” with Joyner Lucas manages to momentarily shake things up. His lackadaisical singing during the song’s intro and hook briefly breaks up the tedium of the unrelenting rapid-fire deliveries found in the previous nine tracks.

“Nobody Move” gets Raekwon and Nickel Nine on the same track, a notable move considering Royce’s Slaughterhouse brethren Joe Budden had beef with The Chef in 2009. The two lyrical hurricanes effortlessly come together to whip up one of the strongest tracks on the project.

While all of the illustrious guest spots — including Curren$y, Action Bronson, B-Real and The LOX — are impressive, and unapologetically show off his reach in the industry, 8 still runs the risk of becoming mellow (if not boring) background music if you’re not paying attention. It’s an overall exercise in patience but at the same time, a pleasant reminder that “real Hip Hop” still exists if you’re willing to wade through the sea of commercial sludge to find it.