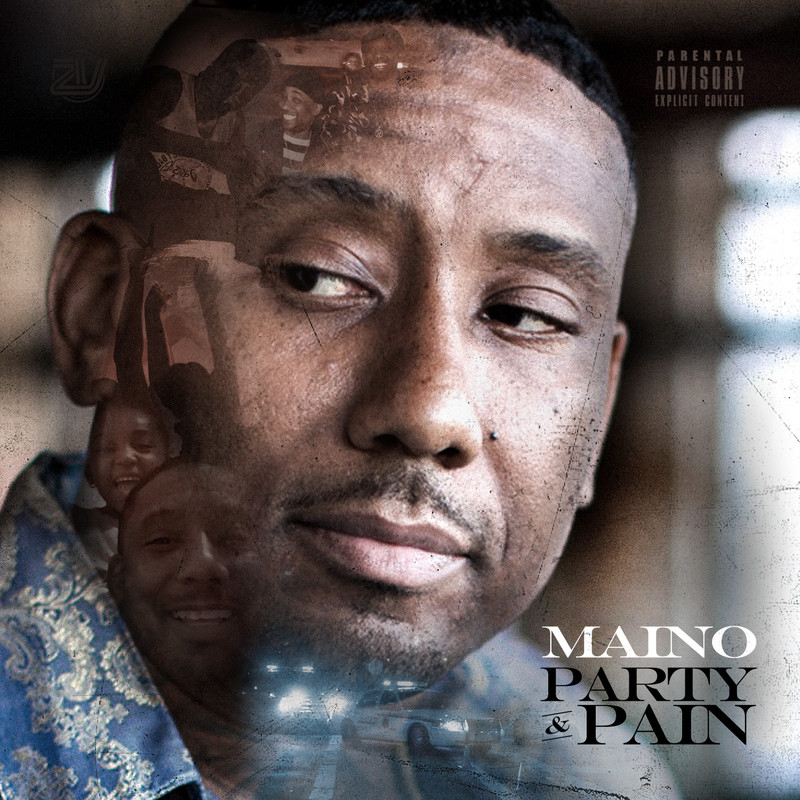 Since his 2003 prison release, Maino’s middling levels of fame and success have been mostly attributed to a driven work ethic that refuses to let any obstacle impede his grind. Though he’s scored a few hit singles in the past decade, at this point, his status has been relegated to that of a neighborhood icon; logic stands to reason this standstill is due to poor timing, an identity clash that’s prevented ascent within the industry or simply a personal preference to represent Bed Stuy’s pre-gentrified grit.

Party & Pain is the latest of Maino’s numerous ongoing street albums where he tells his story loudly, regardless of being received by some as a relative has-been.

At his wits end realizing he’s an ill fit for show business, Maino designs Party & Pain to sort through life’s troubles and shed light on his accompanying coping mechanisms. Setting things off with the energetic but vapid “Helicopters Oct 13”, the self-proclaimed King Of Brooklyn hardly distinguishes himself from the same rat race he maligns. Always out to prove he’s a worthy Hip Hop mainstay, Fat Joe graciously lends his talents to the Auto-Tune-laden “God Bless.” It’s too bad that the elder statesman falls flat with an unfocused verse detailing the joys of making it rain upon strippers and the tragic nature of police shooting innocent black youth. Concurrently, Dave East’s mediocre appearance on “Bag Talk” (one of Party & Pain’s numerous Future imitations) does little to make a good impression of today’s newcomers.

Keeping in line with the presently ubiquitous trend of sampling ‘90s classics, “Keep It 100” updates the melody from JAY-Z’s “Dead Presidents”; here Maino is determined to get the most out of life despite the horrific May 2016 incident where a female companion was harmed by gunfire. Sticking to the same script, “Do Better” attempts to reheat The Notorious B.I.G.’s “Miss U,” as he goes in-depth with remorse for mistreating women. Stuck between hopelessness and looking for his cloud’s silver lining, the somber robotic singing on “Addicted To Pain” falls short of sounding compelling let alone original. A running theme on Maino’s new release is mortality, as “Miss Me When I’m Gone” toys with the concept that he’s somehow unappreciated despite his career’s overall lack of artistic achievements. Ironically, no empathy or emotional chords are

With uncreative tales of ghetto danger alongside Maino medicating through alcoholism and promiscuity, Party & Pain is full of empty feelings without offering much in the way of quality or substance. The most salient moment comes by way of “Ghost Of Kalief Browder,” where he tells the true story of how the justice system fatally failed a young man freshly removed from adolescence. Choosing to coast off of street cred, the grit and acute sense of reality he prides himself on is enough to earn him a participation trophy, but the easiest means of getting his point across ultimately amount to him being a carbon copy of already dull ideas.