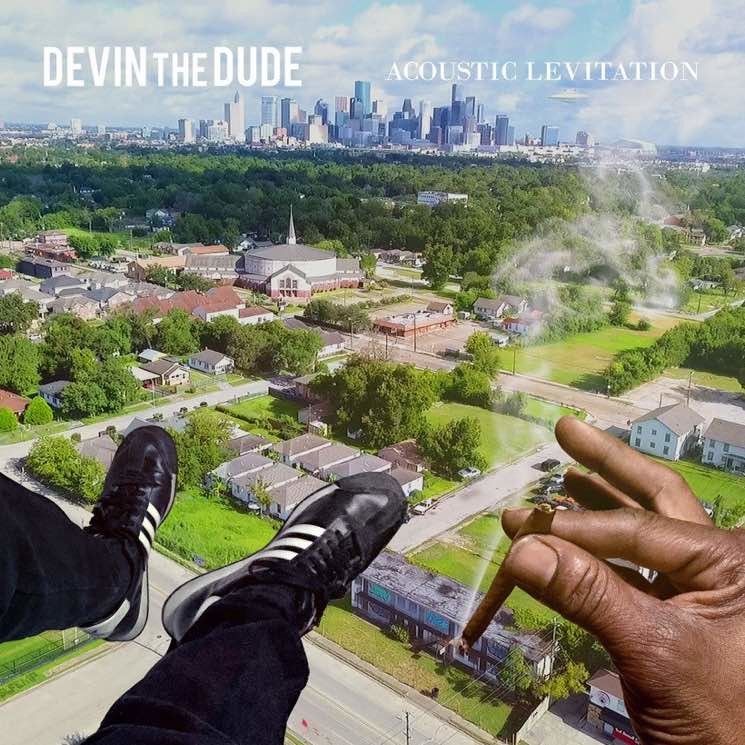 After a nearly four-year hiatus, Devin The Dude reintroduces his syrupy, southern drawl and epigrammatic narration to today’s Hip Hop scene with Acoustic Levitation. The modern day Godfather of today’s stoner rap generation, Devin continues to display his longevity and ability to transcend generations for the past 19 years. Acoustic Levitation borrows from its clinical definition as it takes you through a 14-track journey that uses melody to suspend you in the moment.

The album opens with “Can I”, a melodramatic soundbed complete with crisp, live instrumentation as Devin wax poetics to the woman who has caught his attention. The beauty in Devin’s lyrical ability comes in his effortless storytelling and melodic tone. He hits home with relatable topics and lines such as, “No promises, I’ma just do my best/previous I was devious, wasn’t true I guess,” as the hook carries you through the thoughts of a man who wants to devote himself to his woman.

“Are You Goin’ My Way” blends together the essence of soul and jazz as Devin uses his voice as an instrument to continue the courtship of this woman that has his attention. The hook and bridge features the assistance of Tony Mac and Lisa Luv as they harmonize conversational bars akin to the beginning stages of spitting game. The Dude mixes in with bars such as, “You ridin’ on the 52, and niggas trying to get at you/you ain’t scared you from the hood, yeah it’s all good/they tryna get you in the bed if they could/but I’m offering a service, like Uber, first ride free I’ll spit some game to ya’.”

The funky sythns and deep, stirring bass line on “Apartment #8216” transport you back to early Rap-A-Lot Records days as Devin gives up on his polite request for coitus and gets blunt. The story takes a dark turn, reminiscent of the Royce Da 5’9” track “Part of Me” as he tells a haunting story “The bathroom door was open, the faucet steadily runnin’/and I’m walkin’ towards it but up in the closet something’s bumpin’/scratchin’, soundin’ like a fuckin’ loud growl in the wall, I opened it up four niggas dick and balls cut off.”

Forgettable moments come in the form of tracks like “I’m in the Galaxy”, “It’s Cold In Here”, and “Don’t Get Naked” that either don’t fit or become mundane rather quickly. Perhaps the biggest knock is that Acoustic Levitation is the epitome of mood music. While it doesn’t necessarily serve as a hindrance, an album drenched in a vibe only accessible when the listener is in a particular zone (read: high as college tuition) makes it difficult to draw a consistent connection.

Acoustic Levitation displays Uncle Devin in his natural habitat. If you’re looking for a seasonal, kickback and vibe album to ride to then look no further. Devin’s ability to put your senses at ease is unrivaled. For Devin’s fans, this effort will fit comfortably amongst the upper echelon of his discography.