Review: Nick Grant Attempts To Revive Witty Lyrics On "Return Of The Cool" 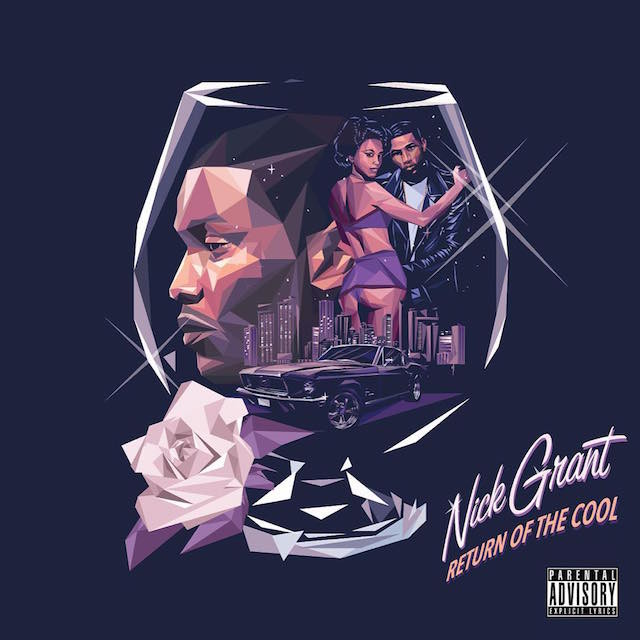 2016 was the year mumble rappers reigned supreme, consequently putting the more traditional pen-and-pad rappers behind the eight ball for mainstream success in 2017. This is nothing new, as we all know how much easier it is to build a buzz on the Internet by dabbing incessantly rather than busting an earth shattering freestyle with god-level bars. But rather than sit in a cypher and cry about it, Nick Grant is taking matters into his own hands and attempting to make lyrics once again, the main attraction with his debut album Return of the Cool.

His last release, A Seat at the Table +One, was actually quite a lukewarm offering and while he’s made better strides at songwriting this time around, he still tends to Salt Man meme sprinkle out freestyle bars opposed to any cooking with real substance. There are more than a few instances where he is just flexing his punchline pronator for the sake of it. For instance on “Bouncin’,” he raps “Kids slide up on you/Like pajamas with the feet in ’em” and “Know I keep that thing/Like when Lauryn dropped Doo Wop”, which are definitely above average similes but also could have boosted his Funk Flex, Sway In the Morning or Showoff Radio freestyles all the same. We’ve come to a point in rap music where hot lines aren’t enough to keep fans engaged — there needs to be more to the equation.

Ironically enough, on “Gotta Be More,” he tries to prove he’s got the “more” factor by denouncing all fellow contemporaries that apparently aren’t doing their lyrical due diligence. He spits “Niggas ain’t been rapping lately, guess I’m trapped in the 80s” which might be true to a certain extent but we’re pretty sure rappers in the 80s weren’t dropping Kim K bars like “Two hundred on a car dash with a trunkful of Ye”. Where are the stories about growing up in South Carolina? Where are the micro-n-macro storytelling cuts that resonate with millennials? Grant proves that he’s nice with the pen, sure, but after digesting this album, listeners may not walk away knowing anything more about the 28-year-old other than that he believes he’s better than everyone else.

Where Grant does earn his props on the project come courtesy of the fresh musicality and effort to make every song sound distinctly different. From the ferocious funk on Brentford All-Stars sampled “Get Up” to the timeless breaks of “Luxury Vintage Rap” (courtesy of the legendary Organized Noize), Grant handles each beat confidently. DJ Khalil, C Gutta, and of course, Karriem Riggins, all lend a hand to the production side making this Grant’s most well-produced project to date.

For an up-and-comer with much left to prove, Nick Grant does indeed have confidence that is “dripping, somebody wipe up the isle”. Throughout the album, he mentions at every turn how he is better than everyone else out but until he starts putting up real numbers and/or making a bigger impact on the current state of the game, he might need to re-evaluate what his “cool” really is.