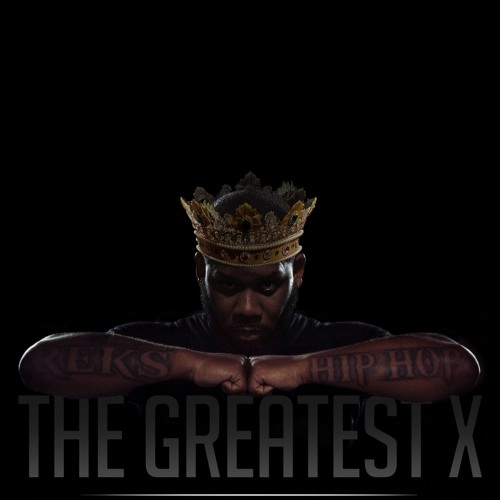 The fact REKS’ tenth studio album, aptly titled The Greatest X (code name for unknown), boasts 35 tracks is an immediate testament to his unwavering passion for Hip Hop culture. The amount of time it must have taken him to craft every bar, rhyme pattern, and shape the overall tone is presumably staggering. However, it wasn’t necessary. The Lawrence, Massachusetts native would have been better off selecting the top 10 to 15 songs for the album and saving the rest for a mixtape. It’s a double album in an era where physical copies are virtually extinct and projects take on a playlist feel. Thankfully, it speaks to his expertise there are several sonic moments of brilliance peppered throughout the album.

Early on, “A.N.O.N.Y.M.O.U.S.” and “Jump Shot” featuring Statik Selektah and Buckwild, explode with REKS’ no-holds-barred lyrical execution over a combination of beautifully arranged piano-laden beats, impeccable scratching courtesy of Statik, and a heavy air of ‘90s Hip Hop nostalgia. Considering the 39-year-old REKS was raised in the ‘80s and entered the culture by way of the B-Boy, it makes sense his catalog carries more of Golden Era sound than anything else.

Aside from REKS’ undeniable rapping prowess, he’s seemingly networked with all the right people. The guest features on The Greatest X include several notable artists. Akrobatik swings through with his dexterous wordplay on the classic Hip Hop-sounding “Plane Gang” and Alias adds some extra East Coast flavor on the engaging “Surrounded,” while California gets some shine on the Planet Asia and Rasco-assisted “Final Four 2.”

Unfortunately, not all of the vocal contributions exactly help. RA the Rugged Man’s verse on “Bitch Slap” is weak at best as the concept of the song itself simply fails to connect. But again, because of the staggering number of records on the album, the easily skippable tracks are nearly matched by the ones that should be cranked up to maximum volume.

The Large Professor-produced “Gone Baby Gone,” which was one of the few singles from the album, stands out as one of the strongest, while “Future Kings” featuring Cassius the 5th carries such a poignant message for young men, its tale of growing up without a positive male role model resonates loudly. “Stand tall/you a king/you can elevate/fly like the eagle/levitate/reach for highest of the highs/through the lowest of the lows/the sun’s gotta shine/gotta rise/gotta grow, he spits, encouraging those listening to persevere.

Most of the time, REKS’ sense of self and level of intelligence oozes out through every syllable he spits, but perhaps due to the sheer amount of material he decided to write for this album, sometimes he falters. On “Liberation,” the reliance on the phrase “fuck these hoes/get money” seems to stand out like a sore thumb among the rich lyrical gems he routinely delivers. It could have been left on the cutting room floor, along with the earnest yet cliché “Good Women, Thot Bitches,” cacophonous filler of “Cigarettes,” and discordant “Eye in the Sky.”

“Worldwide,” on the other hand, featuring Moe Pope (fellow Brick Records label mate and a member of Bay Area collective Mission, eventually named Crown City Rockers) and Supnate help shut things down with its musings on Hip Hop’s cathartic effect, illustrating once again, his love for the genre. While again, 35 tracks may initially sound like a nightmare, once the album is properly navigated, the “greatest” ones truly reveal themselves and prove what makes REKS an undisputed seasoned vet.