From The Archives: Lupe Fiasco's Food & Liquor Gets A Perfect 5.0 Rating 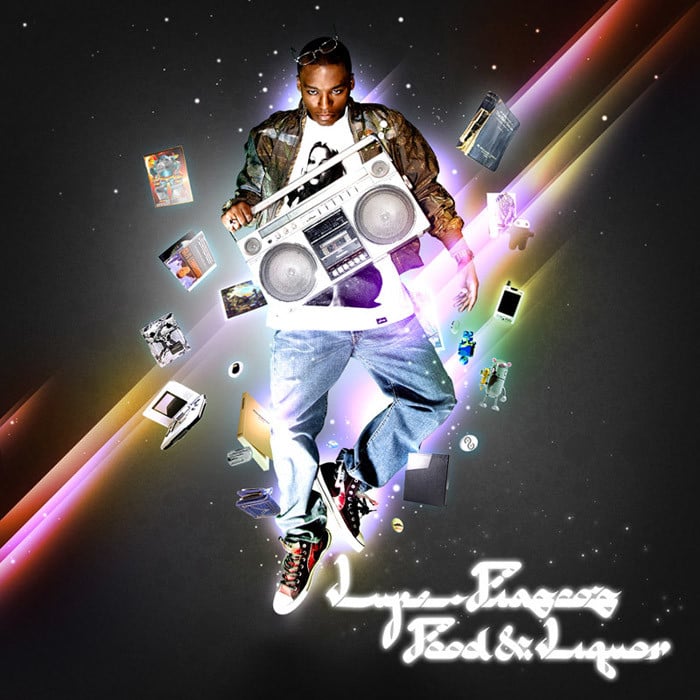 To say Lupe Fiasco’s commercial entry into the Hip Hop game was empowered with perfect timing somehow shortchanges his immense talent, yet it’s still a factually based notion. The year 2006 remains infamous for the year Hip Hop’s pendulum tilted on the Southern arrow on its compass; from some fans’ perspective, it was equitable to cardiac arrest prognosis: the end was near or at best, its life force would forever take on a new blood type. Ringtone rap — an exoskeleton for the varying snap and crunk subgenres – ran just as rampant as the cell phones themselves, artists of all spectrums struggled to properly sell albums as Internet pirating had finally become the norm, whereas it was a custom previously reserved for the tech savvy. T.I. won over the masses with the year’s only platinum rap certification and Nas donned an undertaker’s garb and called for a Hip Hop funeral. Shiny suits had evolved into Gino Green Global t-shirts and Coogi sweaters but the gateway to the promised land was once again a flashy single above all.

Leading up to Food & Liquor’s street date of September 19, 2006, Wasalu Muhammad Jaco had been beefing up his stock as the game’s number one draft pick, much to the delight of his then record label home of Atlantic Records, who were in pursuit of those oh-so-coveted first-week album sales numbers. Hailing from Chicago’s West Side, Lupe has successfully fed the streets with the requisite freebies via his Fahrenheit 1/15 mixtape series and they demanded the full course. So much to the point where, like many albums of the pre-Digital Age, it leaked well ahead of schedule. True-school Lupe fodder like the call-to-anarchy “Spaze Out,” as well as records that upheld the album’s gentrification theme in “Ghetto Story” and “Hustlaz Song” were ultimately lost in favor for a handful of records that focused on netting universal appeal. An audio movie in “Theme Music (To Drive By)” also paid the ultimate sacrifice on the studio floor, leaving its magnificent wordplay that illustrated one of the most reckless acts of gangbanging forever without a future in Best Buy and Target.

Even with the album’s original purity erased like the morning after prom night, Lupe was able to rise to the challenge and deliver a buffet of food for thought that nonetheless would have stuck to ribs had the climate of emceeing not been so dismal. Penned by Andres Hale, the original HipHopDX review praised Lupe for its double entendre-laden bars that stuffed cleverness from a ghetto-raised youth not afraid of the world that generally dictates the course of one’s life. The unapologetic “American Terrorist” is catchy enough for radio in terms of its musicality but was much too real to be tacked on to a Nextel phone’s database. Not to mention it flourished with eloquent wordplay.

When it came to parenting in the hood, there was the serene “He Say, She Say,” which, with a clever sleight of his pen, reflected both a father and son’s unification when no bond existed. Tales from the hood, streets and crypt were all joined in the afterlife on “The Cool,” a picturesque story of an undead hustler that was so vivid, you could feel the dirt the antihero removed from his clothes as he rose from his tomb in search of the path that led him there. Featuring a very uncharacteristic Kanye West beat, the record would go on to serve as the template for Lupe’s sophomore album but that’s another story for another day.

New additions in The Neptunes-produced “I Gotcha” and the fantastically inviting “Daydreamin’,” complete with Jill Scott vocals that send shockwaves through the soul, solidified Lupe’s hypebeast gold-member status where “Kick, Push” earned him a membership. Unlike most albums that carry a classic distinction, Food & Liquor isn’t renown for time-stopping guest appearances but his good buddy Jay Z, who had just shaken off a short-lived retirement, popped up on a new and improved version of “Pressure,” only to be bested by the new kid on the block. Think that time Michael Jordan figured Allen Iverson was just a rookie. Yeah.

And Coast … Lupe’s debut single was A Skatetboader’s Night Dream.

Producers Prolyfic and Soundtrakk scored the bulk of Food & Liquor with a supporting cast of a smattering of talented beatsmiths (Linkin Park’s Mike Shinoda, favored G-Unit soundman Needlz, Atlantic Records CEO Craig Kallman). The Chicago-based producers would achieve modest success working elsewhere but the album’s somber yet enlightening collection of instruments would go on to be their biggest claim to fame.

Lupe would go on to elevate the Jedi on his cinematic storytelling abilities (2007’s The Cool), learn how to satiate radio (2011’s Lasers) and even nail running a marathon in reverse (2014’s Tetsuo & Youth). The Jill Scott-assisted “Daydreamin'” would go on to nab a 2008 Grammy for Best Urban/Alternative Performance. As for those first-week album sales, who gives a fuck. The hood is rarely represented in equal parts lyricism and realism from those who lived it and much like the urban establishments it was named after, Lupe’s debut still holds a special place in the heart of the community.