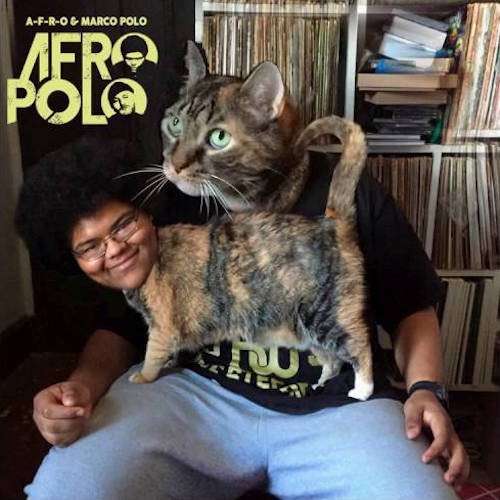 Jamal Gutierrez is better known under the moniker A-F-R-O, short for All Flows Reach Out, and is a tall teen who wears a loose afro and glasses. The surprise of his appearance is paired with the anomaly of his sound which is more similar to Ghostface Killah than Future. His latest offering, A-F-R-O POLO could be on a playlist from the end of last century and not miss a beat. This is because somehow, someway, a gravelly voiced 18-year-old from Bellflower, California has the bravado and rap styles of 1990s New York.

Dripping with East Coast boom-bap, paired with pronounced horrorcore imagery on tracks with names like “Nightmare on Fro Street” as well as flow beyond his years and you get a solid Hip Hop release. Marco Polo who, despite being born in Toronto, learned his trade in the Big Apple and complements the old-school vibe of A-F-R-O’s lyrical approach rather handily.

Given the EP’s duration, not a second is wasted from either spitter or spinner. The opening track, “Long Time Coming,” uses a piano cadence and drum kit to start off strong and A-F-R-O doesn’t waste any time opening up with “Young children, the guns are the villains” before rapping his ass off with a quick cadence, steely flow and voice that sounds like it comes from a middle-aged rap game veteran.

The biggest takeaway from the tape is how practiced and disciplined A-F-R-O sounds. The aforementioned “Nightmare on Fro Street” introduces an element of horrorcore with a hook ominously delivered, “Trick or treat, tonight is Halloween/ I commit murder and smoke collared greens/ The mind of a serial killer in flow speech/ Welcome to the nightmare on fro street.” Before we are done, this theme returns on the weighty “Lair of the Black Worm.”

With very few features, a verse from underground legend Pharoahe Monch warrants a hook that boasts of his inclusion. Monch offers one of the best verses on the album but “Afro the Kid” shows he belongs by hopping on the same keyboard based soundscape and keeping pace with one of the cult heroes in the artform.

“Fro Armstrong” is the most quintessential old school sound found on an album that will surely be described with those two words. Intricate rhymes and complex punchlines take place all on top of scratching complemented by heavy drops meant to blast out of a drop top cruising down the avenue at volumes irritating to those in close proximity. A track like “Use These Blues” exhibits a change of pace with a smooth jazzy beat and Eamon-sung chorus. It is doubtful that A-F-R-O will ever be heard over Auto-Tune or cheap beats featuring high hats but within the essential sonics of Hip Hop in its original form, he’s more than confident in the direction he wants to take in the studio.

With A-F-R-O POLO, these two lesser known entities create a project that most likely won’t be heard by enough people but cherished by those who seek it out. That said, purists in which the EP resonates with will find that no new ground has been broken nor does it stack up to its contemporary releases from yesteryear. However, at just 18-years-old, doubting the blossoming MC to carve out a legacy wouldn’t be a wise presumption all the same.