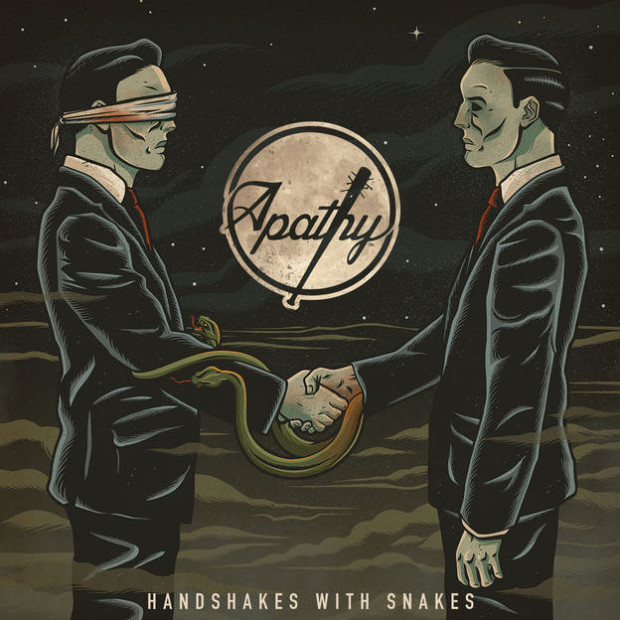 Apathy is a renowned lyricist who still, despite a twenty-year career, approaches the game with a chip on his shoulder. His journey from the Demigodz collective, to Army of the Pharaohs, to Handshakes with Snakes, his fifth studio LP, has been productive but arduous. Longevity and persistence notwithstanding, Ap can’t seem to rid the “underground” association that’s defined him since his humble beginnings. Understandably, he’s frustrated with rap politics, but this time around, it only makes him stronger.

Handshakes with Snakes is a critical examination of the state of Hip Hop, from the fashion to the business. It’s not too long or short with 13 tracks, and runs smooth and concise in its duration. Because Apathy’s reputation precedes him, his critiques of the new school are predictable, but far from trite. He also handles the production, and is flanked by a dope supporting cast of guest MCs. The result is a very strong, polished product that arrives at a most opportune time, both for him and the culture.

Apathy views contemporary Hip Hop through an analytical lense, and expresses disdain in scattered smatterings throughout the album, which helps his message avoid being preachy. The aptly titled “Rap is not Pop” is chock full of quotables aimed at the naive music-listening general public: “Everybody recycles everybody else beats / Fifty versions of a song 30 times in a week / That everybody repeats, and everybody is weak / East Coast rappers be dick-riding Dirty South beats.” Then, in the midst of a deep, introspective prose on “Charlie Brown,” Ap quickly observes that, “Nowadays music sound so weird / Everybody clothes are tight, everybody got a beard.” He may sound like a grumpy old man, but his qualms resonate with many fans, young and old. Most importantly, it’s tasteful, and never overkill.

When he isn’t aiming artillery at the mainstream “pop rap,” Ap is clearly having fun. He always has some funny verses, but he also partakes in a few posse cuts that showcase his versatility. “Don’t Touch That Dial” with O.C. and Ras Kass is a lyricist’s ball that pits three cult-classic MCs against one another, while “Moses” with Bun B and Twista is an uptempo display of OG regionality.

He’s an exceptional lyricist in more ways than one, but Handshakes with Snakes is also a testament to Apathy’s abilities as a producer. The purist that he is, he opts for the minimal, sample-based boom-bap beats more often than not. And quite simply, he just has a knack for knowing what sounds good. “Attention Deficit Disorder” forgoes drums and features hyperactive flows, while “Run for Your Life” is carefully layered and smacks. He achieves great diversity of sound while simultaneously keeping the music in the same creative vein. In the end, the beats prove to be as consistently well-crafted as the rhymes.

Apathy’s reputation is based upon his technical lyrical abilities, even though he’s been actively fighting that notion since producing the bulk of his second studio album, Wanna Snuggle? Handshakes with Snakes succeeds in the lyrical realm, and then elevates behind the power of the production. Ap has carefully assembled a multifaceted album, rooted in classic styles, and retouched with contemporary flair. It may never get the same shine as works from some of his peers, but Ap should find some measure of contentment in the overall strength of Handshakes with Snakes.